Princess Eugenie is the Queen’s granddaughter who married at Windsor Castle on 12 October 2018. For the ceremony, Eugenie wore a stunning custom wedding dress and a tiara which she borrowed from the Queen’s collection. Many royal brides will wear a special tiara for their nuptials but Eugenie surprised some royal enthusiasts when she decided not to wear the York tiara like her mum, Sarah Ferguson. The tiara the Princess wore actually had a very special nod to Sarah and the Royal Family.

The Greville Kokoshnik tiara and Eugenie’s diamond and emerald earrings from her groom were a nod to the Emerald Isle.

For her nuptials, Eugenie wore a specially made dress by British based designers, Peter Pilotto and Christopher De Vos.

The long-sleeved garment had a thick silk, cotton and viscose blend with a fitted bodice and full pleated skirt.

Eugenie used her dress to give a subtle nod to members of her family as it had symbols important to her and her family sewn into the design.

When Sarah Ferguson and Prince Andrew married, the Duchess wore the York tiara which was gifted to her by the Queen.

Before Eugenie’s wedding, many people thought she would borrow her mum’s tiara, but she opted to wear the Greville Kokoshnik tiara instead. 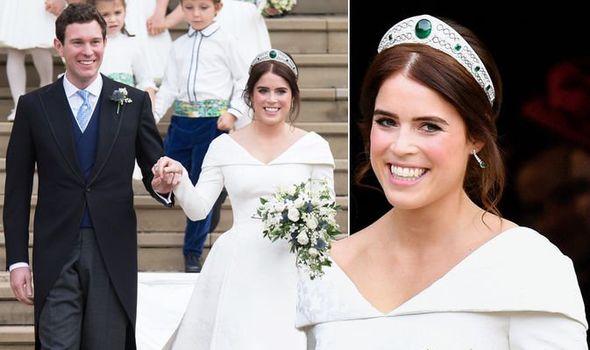 The tiara had a diamond and emerald design which gave a nod to her Royal Family as it was steeped in history, Claire Adler, jewellery specialist and luxury PR consultant, explained.

She told Express.co.uk: “It was made by Boucheron in 1919, bequeathed to Her Majesty The Queen’s mother in 1942 by wealthy socialite Margaret Greville and was worn by both the Queen and her late mother.”

Although the tiara was not the same one worn by Sarah, it could have made a nod to the Duchess’ Irish roots.

“While emeralds are the perfect fit for Eugenie’s beautiful green eyes and colouring, the Greville Kokoshnik tiara and Eugenie’s diamond and emerald earrings from her groom were a nod to the Emerald Isle, hinting at the Ferguson family’s Irish heritage,” Claire explained.

Months after Princess Eugenie got married last year, it was revealed her title had changed. 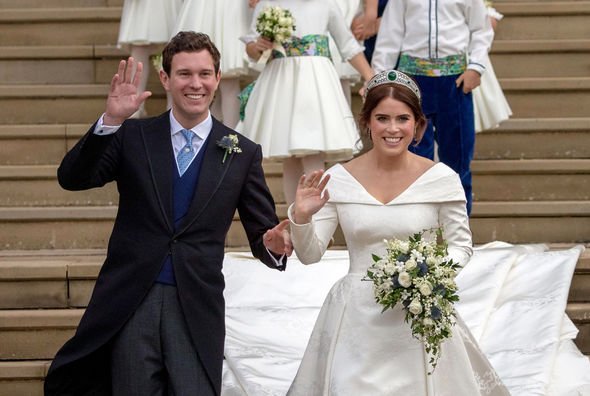 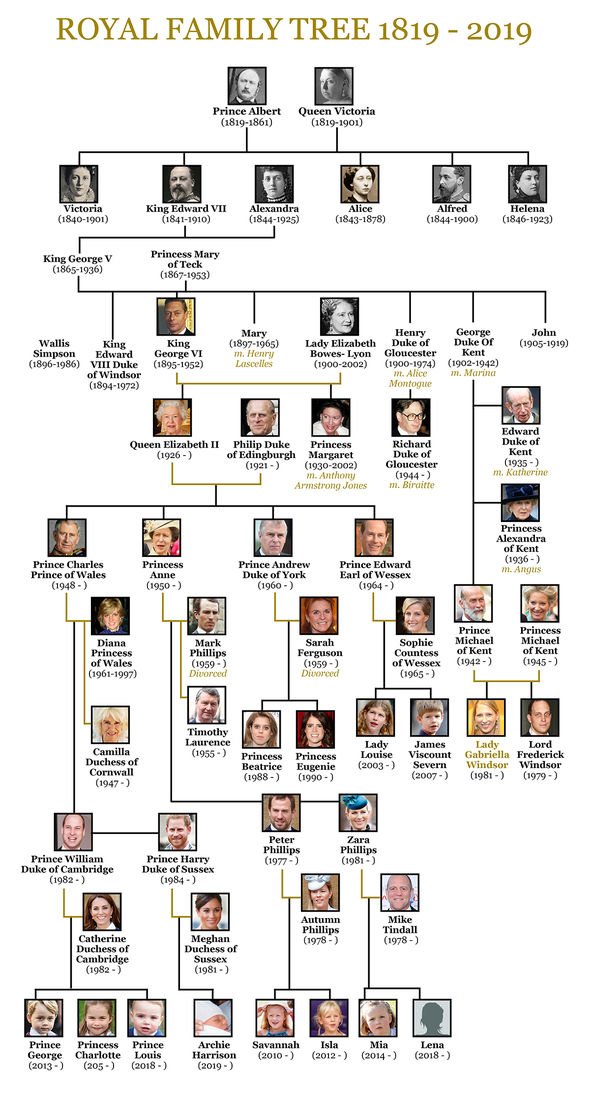 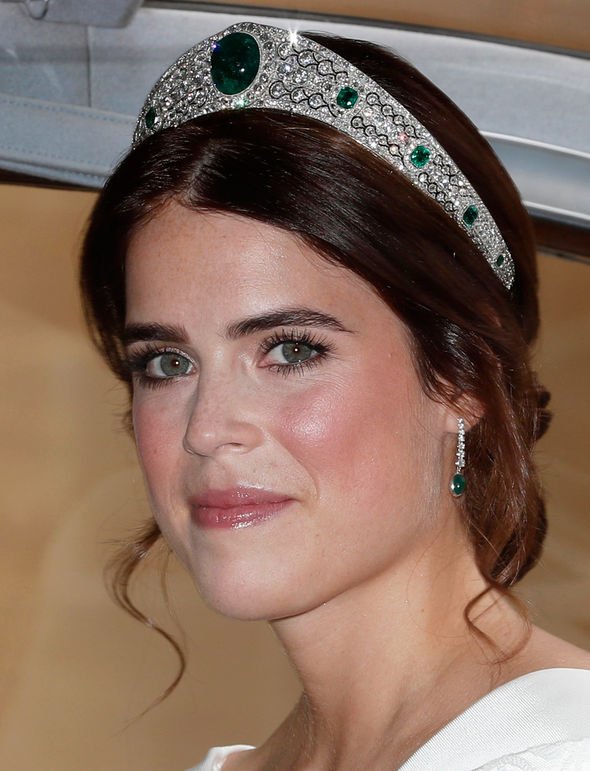 As the granddaughter of the monarch, the Princess was given Her Royal Highness status when she was born.

However, after marrying Jack Brooksbank last year, Eugenie’s title changed as she was given an addition name.

The Court Circular, which records the details of engagements undertaken by the royals, changed and referred to her as Princess Eugenie, Mrs Jack Brooksbank.

Eugenie married at Windsor Castle just six months after Meghan Markle and Prince Harry tied the knot at the same venue and the royal may have taken inspiration from the Duchess.

The Princess of York wore a long-sleeved and slightly off the shoulder design which had similarities to the gown worn by Meghan Markle.

Her full title is Princess Eugenie Victoria Helena of York. She is the Queen’s sixth grandchild and is currently ninth in the line of succession.

She then attended St.George’s School in Windsor before completing her A levels in Art, English Literature, and History of Art at Marlborough College.

In 2013, Eugenie moved to New York City to work for online auction firm Paddle8 as a benefit auctions manager.

She returned to London in 2015 to work for Hauser & Wirth art gallery as an associate director, gaining a promotion to be a director in 2017.

Princess Eugenie joined Instagram in March this year, the first royal to officially do so. Other members of the Royal Family have accounts run by the palaces.

She has 281,000 followers, but is only following 19 accounts, including close friend Ellie Goulding, her mother, and Queen Rania of Jordan.

Eugenie mixes in strictly A List circles, and is friends with celebrities and the cream of British society.

Ellie Goulding, Cara Delevinge, Jack Whitehall, Jimmy Carr, and James Blunt are also known to be friendly with the Princess.