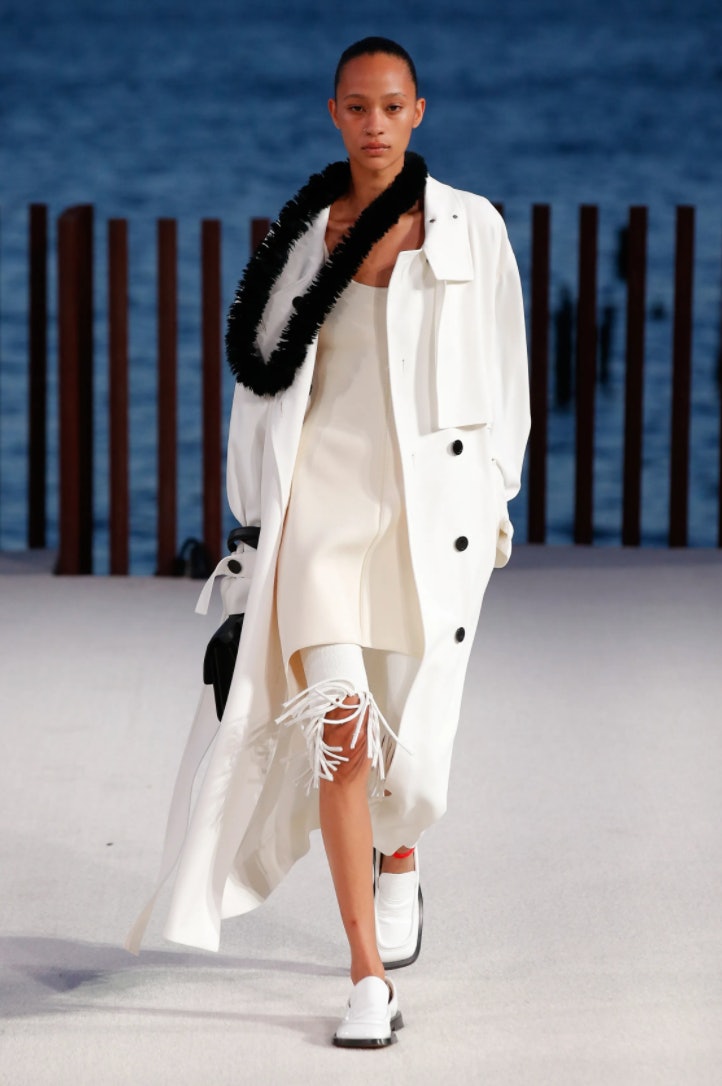 Although New York Fashion Week spring 2022 technically began on September 8th with a stacked roster of shows including Ulla Johnson (which turned its runway into a hall of mirrors inside the Brooklyn Botanic Garden), Willy Chavarria, and Proenza Schouler, it was Collina Strada designer Hillary Taymour who set the scene the day prior for the first IRL NYFW since February 2020. Collina Strada’s show took place on the rooftop farm at Brooklyn Grange; as the late afternoon sun set, models including Jazzelle Zanaughtti aka Ugly Worldwide, and the musician Hawa frolicked down a stone path surrounded by tomatoes, jalapeños, and arugula growing in planters. They ran, skipped, and danced wearing Taymour’s spring 2022 collection titled “Snail’s Pace”—which consisted of cheerful prints done in orange, pink, sky blue, and upbeat florals. The buoyant mood was echoed at shows for Maryam Nassir Zadeh and Proenza Schouler (which held their standout presentation at Little Island overlooking the Hudson River), and felt by all who attended the shows. After a year and a half of isolation, designers wanted to convey a happy lightness, and their love for fashion on a real-life runway. Although NYFW spring 2022 is still happening during the pandemic, brands at all levels are taking precautions, only allowing in vaccinated folks, hosting shows outdoors, requiring masks, and limiting attendance numbers. Although it’s a “new normal,” out-of-the-ordinary kind of fashion week, the camaraderie is still potent—plus, we’re seeing a ton of killer clothes. Below, scroll through our favorite looks of the season from Peter Do, Alejandra Alonso Rojas, and more.