When Sting married Trudie Styler 26 years ago, his close friend, Simon Astaire, served as the best man. Last month, in New York, Sting was finally able to return the favor.

“I’ve known him for 40 years; I never thought I’d be the best man, because I never thought he would marry,” said Sting, a.k.a. Gordon Sumner, as he was standing in the Manhattan Marriage Bureau.

Mr. Astaire, 57, would have had to agree, until he met Pilar Ordovas.

“Pilar is different than anyone I’ve gone out with,” he said. “There’s a connection I have never felt before. She will make me a better person, and I knew that as I started to fall in love with her.”

Long before the couple met, Mr. Astaire, who was born in London, was far more successful in his professional life than his love life.

At the age of 19, he began working as an agent with International Creative Management, one of the world’s largest talent and literary agencies. In 1993, he became a publicist, representing members of the British royal family, specifically Prince and Princess Michael of Kent, among other clients. In 2008, he turned his attention to writing, and for the next decade wrote seven novels including, “The Last Photograph,” which was adapted into a movie in 2017.

Although he has a son, Milo, 25, with the model Saffron Aldridge, the pair never married, and Mr. Astaire had almost resigned himself to being single.

“I was sent away to school at a young age and learned to shut off any emotion,” Mr. Astaire said. “To show any sort of love or sensitivity was seen as a weakness. That has deeply marked my life and it followed me. I’ve had loving relationships, but they have been short term. It’s taken me a long time to meet someone who was able to understand me and my resistance.”

In March 2016, Mr. Astaire was at Kennedy Airport traveling home, from New York to London, when he spotted a chicly dressed woman in the line at British Airways. He saw her again in the airline’s executive club. “I thought, ‘If there’s a God, please seat her next to me,’” he said.

Ms. Ordovas, 46, who is from Madrid, had worked at the Christie’s auction house as the international director and deputy chairman for more than a decade before becoming an art dealer with galleries in New York and London. Though she was married at the time, the relationship was dissolving.

“My marriage of 15 years was coming to an end,” she said. “I was dreading going back home to London because that was waiting for me.”

Unlike Mr. Astaire, Ms. Ordovas had not spotted him until, as fate would have it, he sat in the opposite seat from her on the plane. 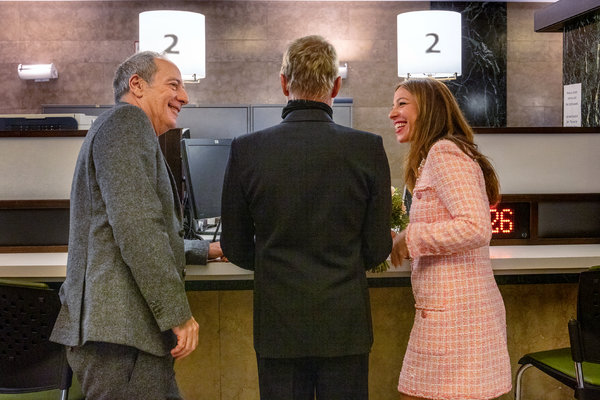 “I couldn’t believe I was sitting next to her,” he said. “In business class they have these swine seats that face each other. It’s one of the worst designs. You sit down and you are literally facing a stranger. I wanted to make her feel comfortable, so I said, ‘Don’t worry, as soon as we take off I’ll put up the screen.’”

The screen remained down and the two never stopped talking.

During the six-hour flight they found out they knew the same people and bonded over their love of dogs: Ms. Ordovas had one, Mr. Astaire wanted one. They said their goodbyes upon exiting the plane, as Ms. Ordovas had a carry-on bag and Mr. Astaire checked his luggage.

“I didn’t think I’d hear from him,” she said. “I never meet interesting people on planes. But I phoned my office in the car and told them I spoke to this really interesting man.”

Mr. Astaire called his son, an art lover, and told him he had met a woman named Pilar Ordovas, who was a “kind, interesting, fascinating and beautiful woman,” he said. A recognizable name in the art industry, his son thought he was kidding. “Milo said, ‘Do you know who that is? You’re lying to me. I’d love to meet her.’”

The following day Mr. Astaire met Sting for lunch and told him all about Ms. Ordovas. Because she was married, he didn’t consider courting her, but he wanted to follow up on the dog breeder she had suggested. They stopped by her gallery on Savile Row in London, but she wasn’t there. Mr. Astaire left his phone number and email address. She responded soon after with the breeder’s information.

A few months later, he texted and asked if she would meet with his son. She said yes. And as weeks passed, Ms. Ordovas and Mr. Astaire would meet once more, casually, at her gallery.

On New Year’s Day 2017, Mr. Astaire was having a drink at the White Horse Tavern in Manhattan. Seated under a portrait of Dylan Thomas, he posted a quote from the famed poet on Instagram: “I wrote, ‘Life always offers you a second chance; it’s called tomorrow,’” he said, “and wished everyone a happy New Year.”

Ms. Ordovas, who was by then divorced, saw the post and was encouraged by co-workers to respond. She, too, was in New York and sent him a message. But by the time he saw it, he was at the airport heading to Los Angeles. He promised to connect when he retuned to London.

The two had dinner in early March, a year after first meeting. “She was as lovely as I remembered,” Mr. Astaire said. “It’s like for all these years I’d been looking in the wrong place. I met someone that has the essence of understanding me.”

Ms. Ordovas was just as surprised by their connection. “I hadn’t dated for so long — I was nervous but so comfortable with him,” she said. “He has a good way of asking questions and making you feel comfortable. It didn’t occur to me that I would fall in love again.”

Over the next few months, they saw each other three or four times a week until Mr. Astaire went to Los Angeles for work. The separation allowed them to see how much they missed each other.

Over the summer, the couple took a seven-day road trip to Marfa, Tex., where Ms. Ordovas was eager to see the Judd Foundation. Mr. Astaire had wanted to see certain parts of America. So they rented a car in New York and made stops during their weeklong drive: to Washington to see Georgetown; Virginia to experience Amish country; and Memphis, to see the Lorraine Motel, where Martin Luther King was assassinated, and to Sun Studios, Elvis Presley’s recording studio.

“People thought we were absolutely mad, but they said, ‘If you survive this, you’ve really got a chance of making it,’” Ms. Ordovas said. “We had this amazing experience that really brought us closer together.”

“Pilar gives me a sense of happiness I’ve never felt before with the exception of when my son was born,” he said.

They spent the holidays together and continued to grow closer. In February 2018, Ms. Ordovas moved to Elizabeth Street in London; Mr. Astaire unofficially followed while keeping his place in the city’s Chelsea neighborhood. Then Ms. Ordovas had some unexpected surgery, and for two months Mr. Astaire took care of her.

“When I came to visit, I was so excited to see him,” she said. “I saw a real change. He was able to articulate it in a way he hadn’t been able to do so before. He went from ‘I don’t want to commit’ to ‘I don’t ever want to be away from you.’”

In November an unexpected proposal came. Mr. Astaire was in Central Park while on the phone with his brother who needed an answer to an important question concerning their family. “I told him I have to talk to Pilar, and realized that she’s in my life now and will be part of the decision-making in the future,” he said.

That revelation became the impetus to propose. He returned home and found Ms. Ordovas in the kitchen making coffee. “I said, ‘I need to ask you something about my family. I need your advice.’ And by saying that to her, I realized I couldn’t hold it in any longer. I had to ask her to marry me,” he said.

A month later found the couple, Sting and Trudie, and several family members, at City Hall. “They’ve been waiting for each other for a very long time; she’s exactly what he needs,” Sting said.

“I like the civic nature of City Hall,” Sting added. “All kinds of people are here, the wealthy and not so wealthy. It has a depth of meaning. I love the atmosphere.”

Mr. Astaire did, too. “I love City Hall. New York was something I’d always dreamt about. I have enormous respect for this country,” he said beaming, standing next to his new wife. “I wanted America to be part of my life more than anywhere else.”

Dressed in a pink and white Chanel tweed dress, wildflowers clutched in one hand, her husband’s arm clutched in the other, she echoed his sentiments. “New York is really special to us. We met here, he proposed here. We wanted our marriage to be about us, and continuing our lives together. We wanted our nearest and dearest here. We didn’t want it to be about the party.”

Then she added, “It’s a perfect day. It’s even snowing outside.”

Rings Ms. Ordovas’s ring, a diamond band, was bought at Harry Winston in London. Mr. Astaire’s ring, a gold band purchased at Cartier in London, was engraved with Ms. Ordovas’s name and their wedding date. “It’s a Spanish tradition to inscribe the name of the other person in the ring,” she said. “I took Simon’s son with me and we did it together.”

Wildflowers “I wanted off-white and peach flowers,” she said, something slightly wild, that looked like they were picked from a field and went with my dress. They came from Polux Fleuriste, a boutique florist run by two Frenchwomen.”

How to clean a washing machine | The Sun