Michael R. Bloomberg stood on the red carpet Monday night, smiling his tight smile and rebuffing questions about whether he planned to run for president.

His hearing also seemed to fail when asked if he would wed his longtime partner, Diana Taylor. “I didn’t hear that question,” he said, all three times it was asked.

That was understandable. After all, he was at Lincoln Center to discuss “Paris to Pittsburgh,” a new documentary about climate change financed by his nonprofit foundation, Bloomberg Philanthropies.

“It’s critical people understand that something is changing in this world, not for the better,” Mr. Bloomberg said. “And unless we do something, it’s not going to turn out well.”

A theme emerged when other well-heeled guests were asked how climate change affected them. 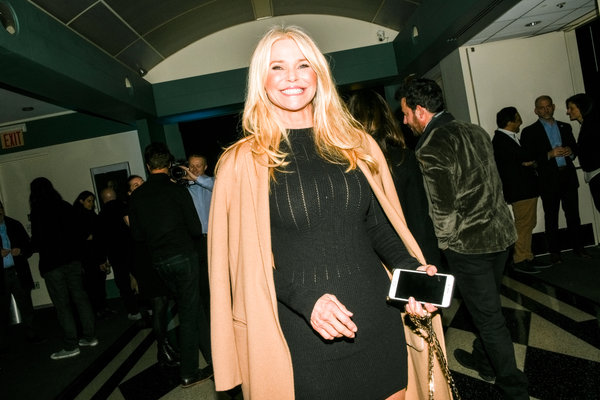 “Well, I mean, I own some real estate on the water,” said Christie Brinkley, the former model, who listed her two Hamptons estates earlier this year for a combined $49.5 million.

The actor Ed Norton began: “Well, I have a house in Malibu.”

And Martha Stewart said: “I live on a farm in Bedford, New York, and we’ve had so much rain this year. I live on the top of a hill, and I’m living in a swamp.”

Ms. Stewart also said the children of her former “Apprentice” boss, President Trump, would never be accepted back into New York society because of their father’s environmental policies.

“I think they drank the Kool-Aid and I’m sorry about that, because Ivanka is an intelligent, beautiful young woman,” she said. “How can she allow her father to go and start drilling in Alaska? We don’t need oil — just drive a Tesla car.”

After a short walk across Central Park, it smelled like teen spirit at the Marc Jacobs store on Madison Avenue.

The designer’s 1993 grunge collection for Perry Ellis was so poorly received that it got him fired. Now, 25 years later, he is revisiting the collection under his own label — everything from $45 rainbow socks to a $2,400 floral chiffon slip dress.

Grunge glamour, Mr. Jacobs said, is something “you can achieve if you just let yourself go. Any kind of visual noise is perfect.”

The Monday night event drew several scenesters — like the teenage models Presley and Kaia Gerber, and Gigi Hadid — who were not born when Generation X was slouching around in check flannel, checking their beepers.

Sandra Bernhard, herself a ’90s icon, mentioned that the new play “Bernhardt/Hamlet” — about the French actress Sarah Bernhardt in a gender-nonconforming production of “Hamlet” set in 1899 — has been causing confusion.

“A woman got there and said, ‘What the hell happened? I thought you were in ‘Hamlet.’’’ Ms. Bernhard said of a recent complaint from a dinner companion. “She left at intermission.”

Nobody left during a screening of the riveting “If Beale Street Could Talk,” held Saturday night at the New York Institute of Technology. The new film, directed by Barry Jenkins (who won Oscars for best picture and adapted screenplay in 2017 for “Moonlight”), is based on James Baldwin’s 1974 novel about a young African-American man wrongly imprisoned by a racist system.

“So much about the story is still relevant today,” Mr. Jenkins said. “It just shows how pervasive some of these problems have been.”

“I’m probably one of the few people that knew James Baldwin,” said Gay Talese, 86, over a gin martini with a lemon twist. He described a 1966 dinner at his Manhattan home attended by Baldwin and Tom Wicker, a celebrated columnist for The New York Times.

“Baldwin got into an argument with Wicker about race, and Wicker’s wife, Neva, said, ‘Jimmy, you can’t talk to my husband that way.’ She was crying and he said, ‘I can talk to your husband as I wish,’” Mr. Talese said.

“She ran from the table, into the living room, and grabbed the curtains,” he added, miming Neva burying her face to dry the tears.

Did the curtains have to go out to be cleaned? Mr. Talese paused at the question but did not answer. Great men pay no mind to the drapes.

‘Baby sprinkles’ are the new party trend for expectant mums… but would you ditch a baby shower to host one?