STUDENTS playing pranks on each other will never get old – but one guy decided to up the ante as he got revenge on his housemate for stealing his mattress.

Nat Openshaw jumped at the chance to teach his neighbour and fellow student Katy Hughes that all-important lesson not to leave your bedroom door unlocked while you're away. 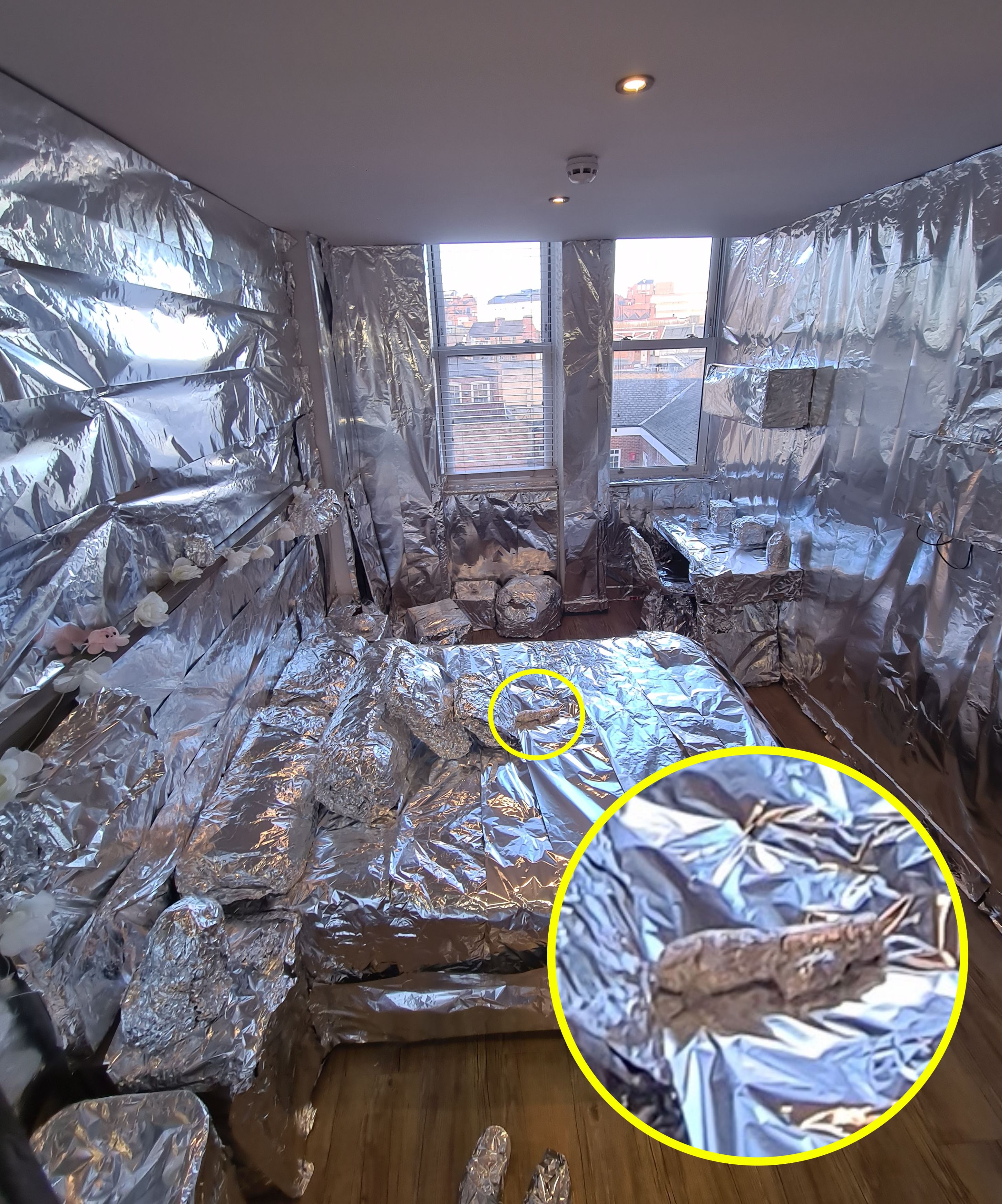 The 21-year-old, who lives in the flat above, decided to get his own back on Katy for stealing his comfy mattress when she travelled home from Nottingham to visit her family in Cheshire.

He spent £20 and more than five hours covering her entire room in 360m of tin foil – and even made sure to wrap up her sex toy.

The scheming student decorated everything from her toilet to every wall in 20x18m long rolls of tin foil. 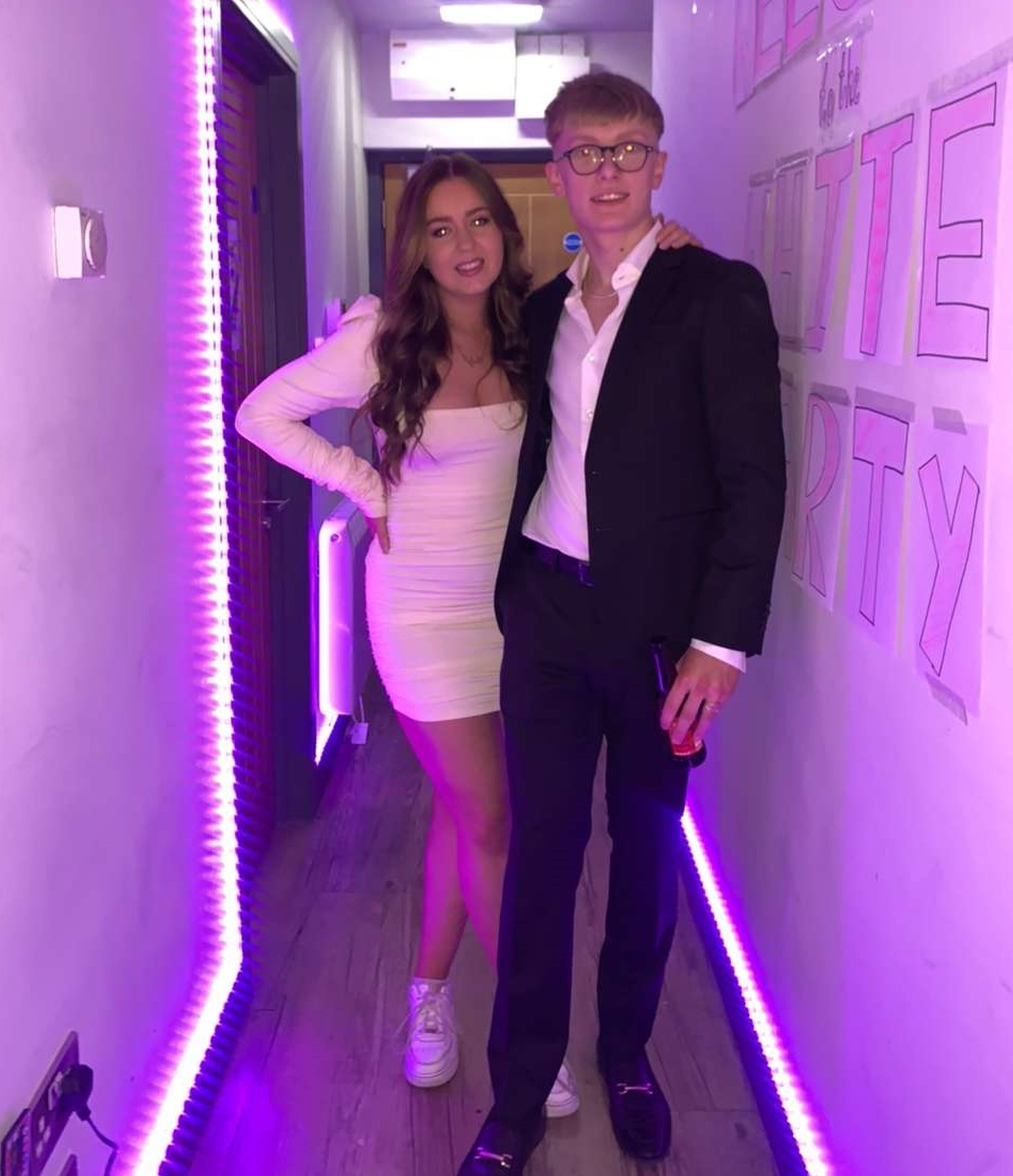 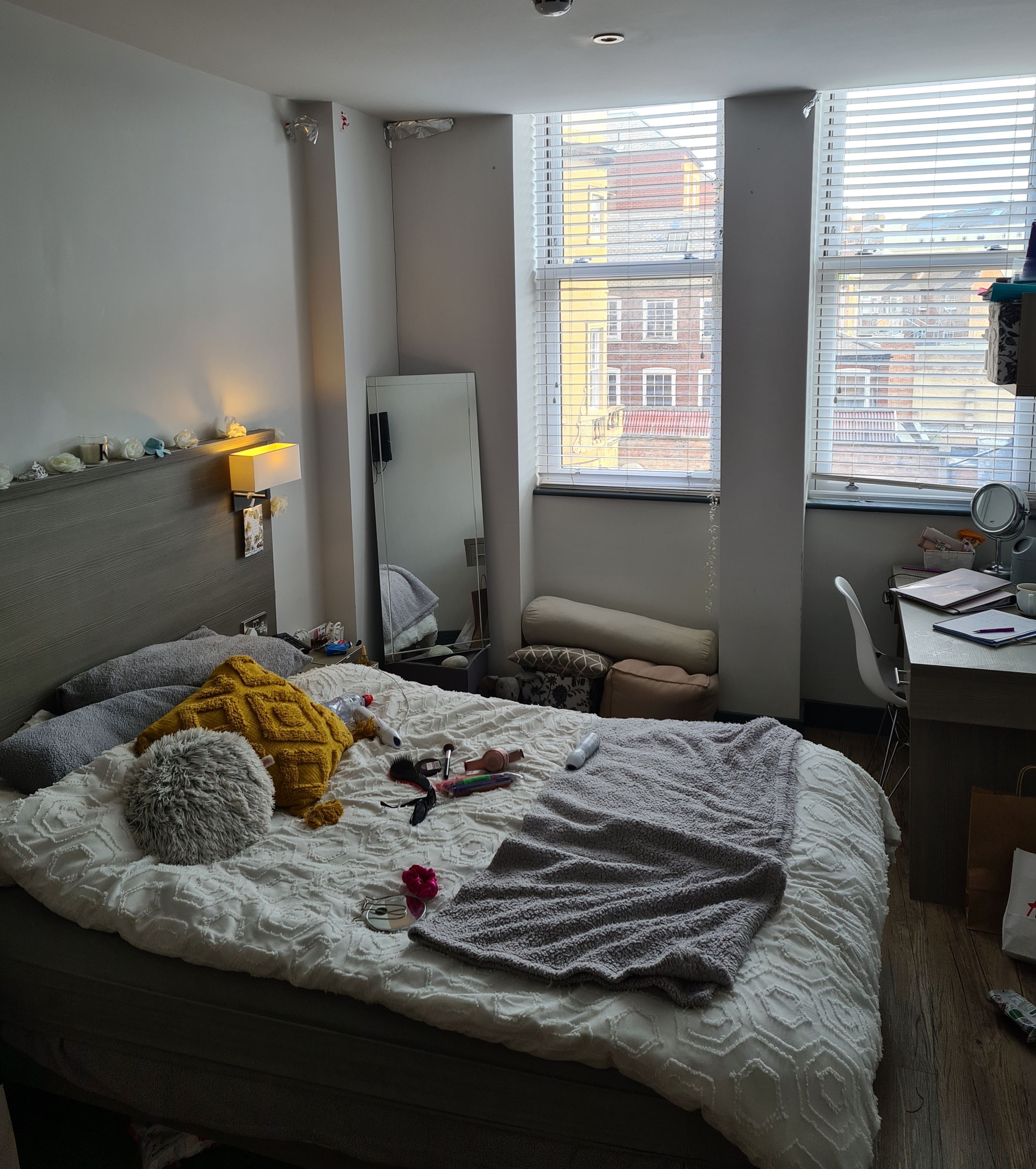 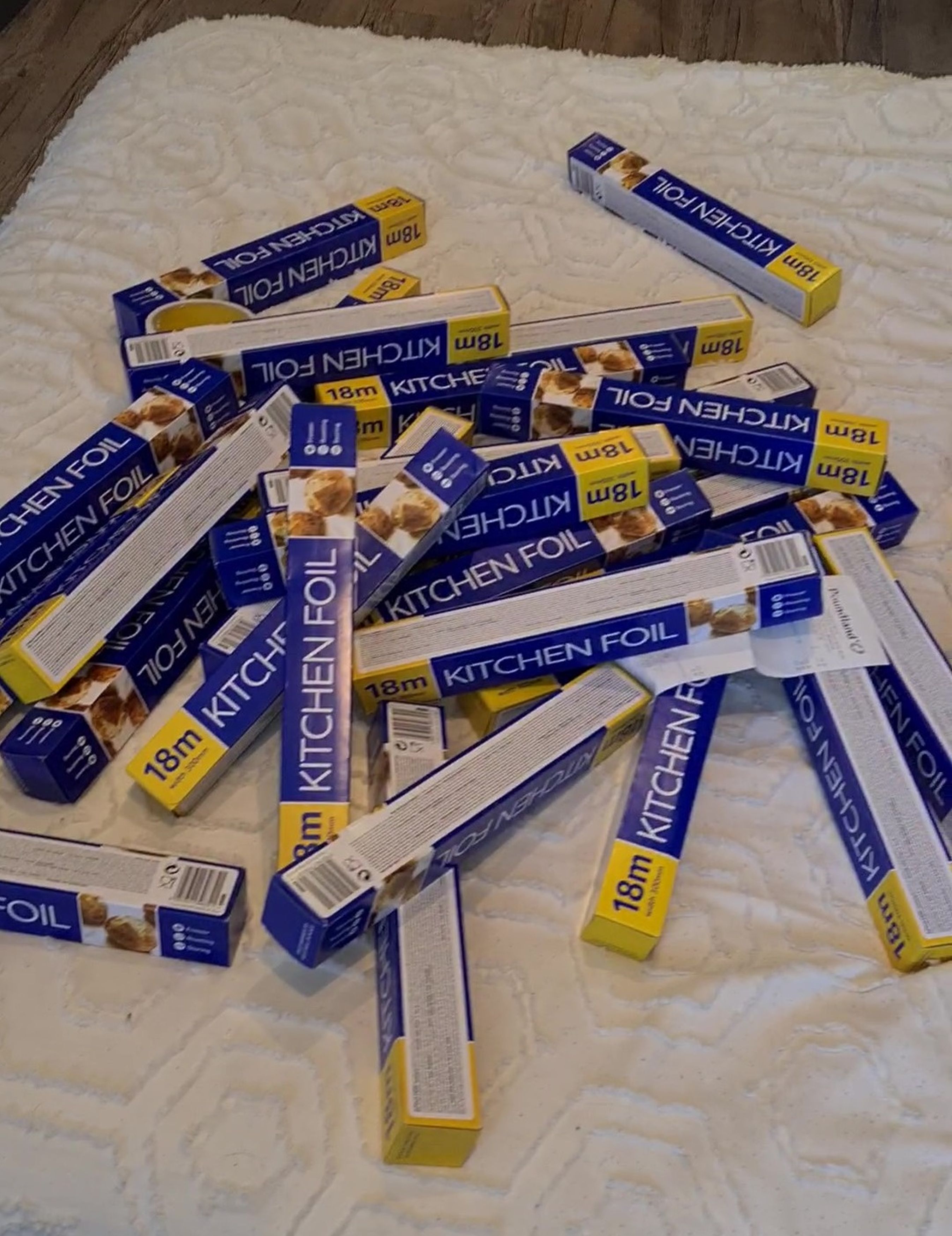 Katy, also 21, returned to her digs five days later and her flatmates were on hand to film her stunned reaction as she realised her room had been given an unwanted makeover.

"It feels like I'm in a bad dream," she squealed, with Nat turning the clips into two videos that have been shared on TikTok and racked up more than 146,000 views and 15,000 likes.

He justified targeting his fellow Nottingham Trent University student because she's like "a magpie who loves shiny things" – and as revenge after she switched his soft foam mattress for another resident's old spring one, which he failed to notice until he got into bed. 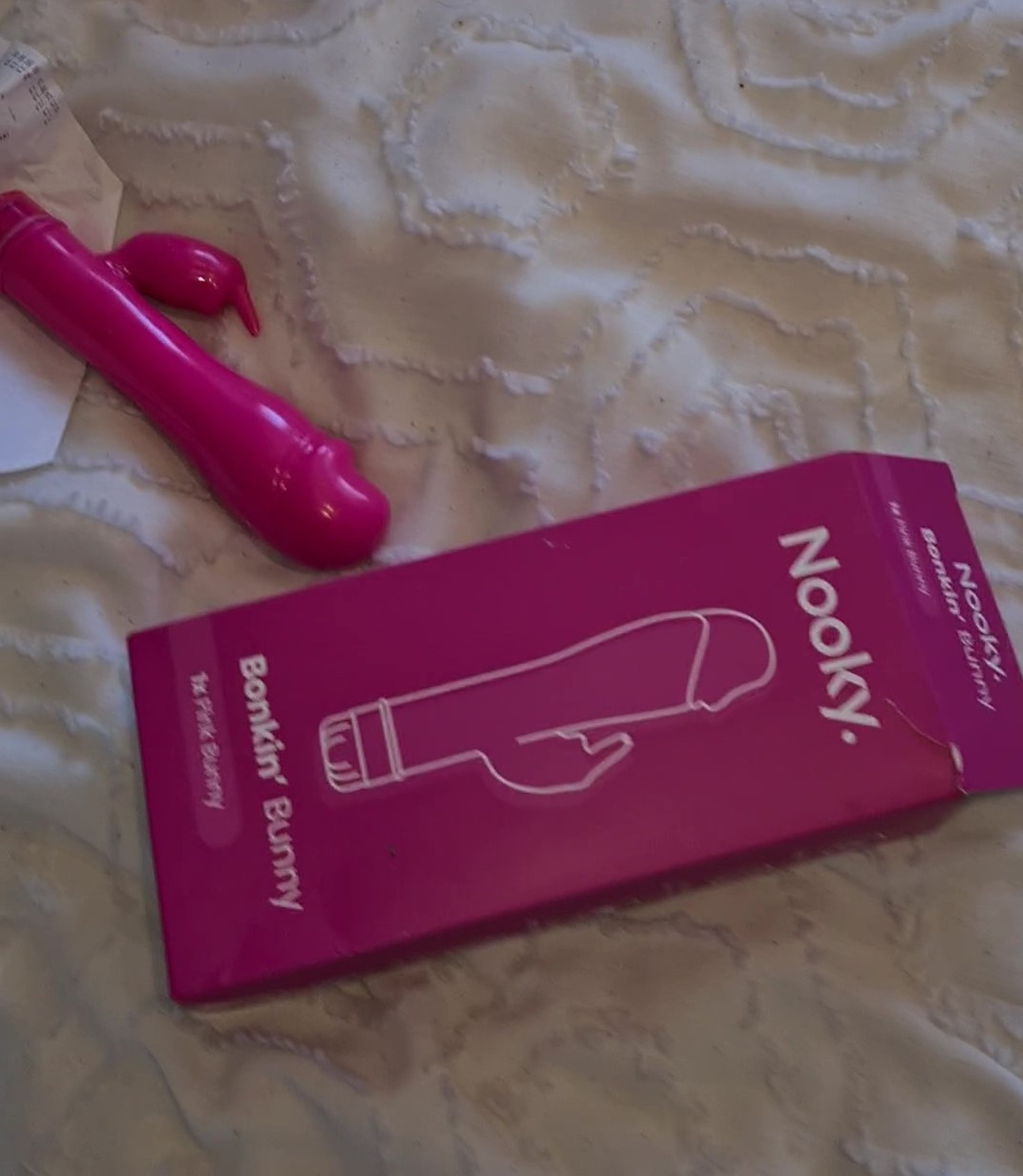 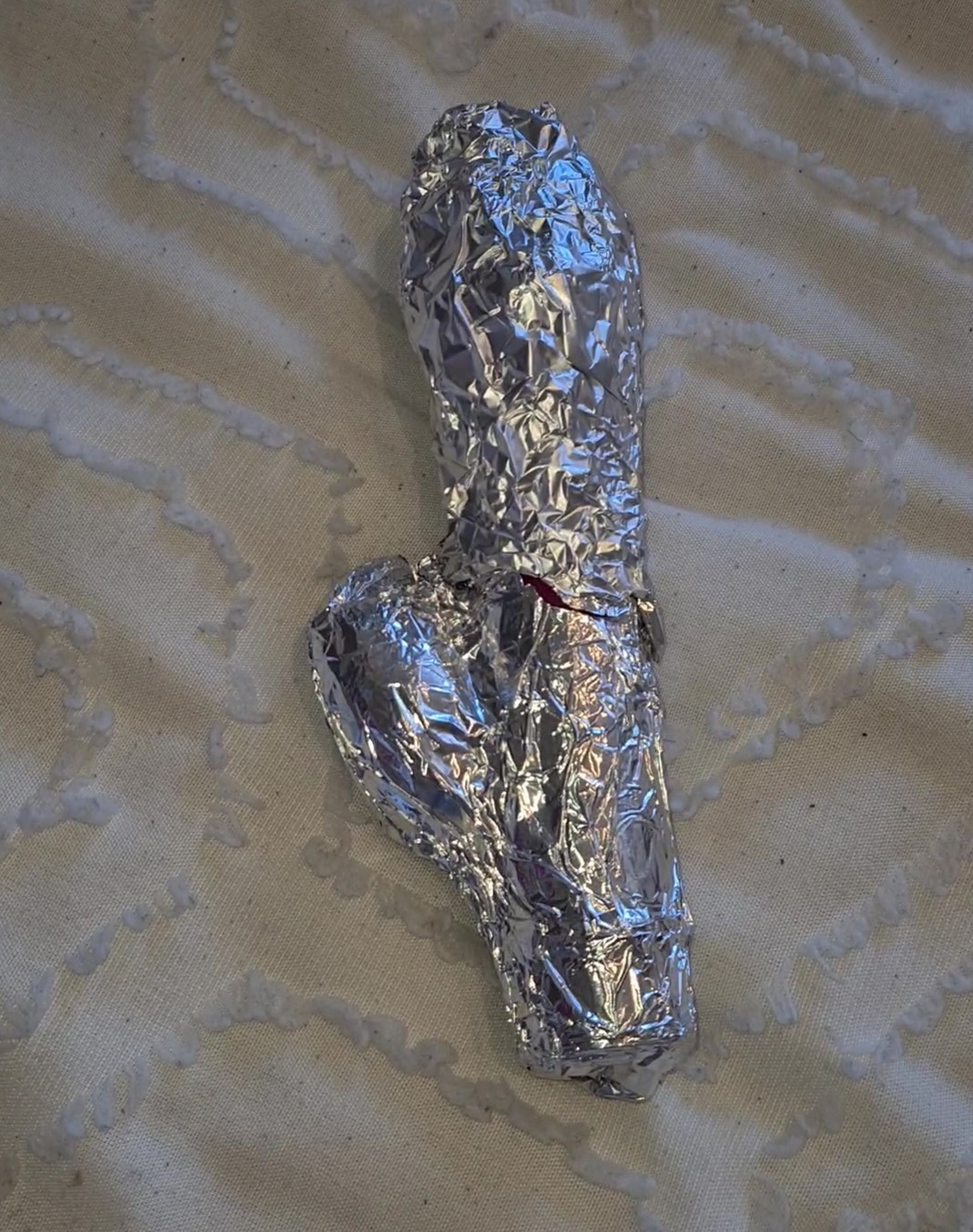 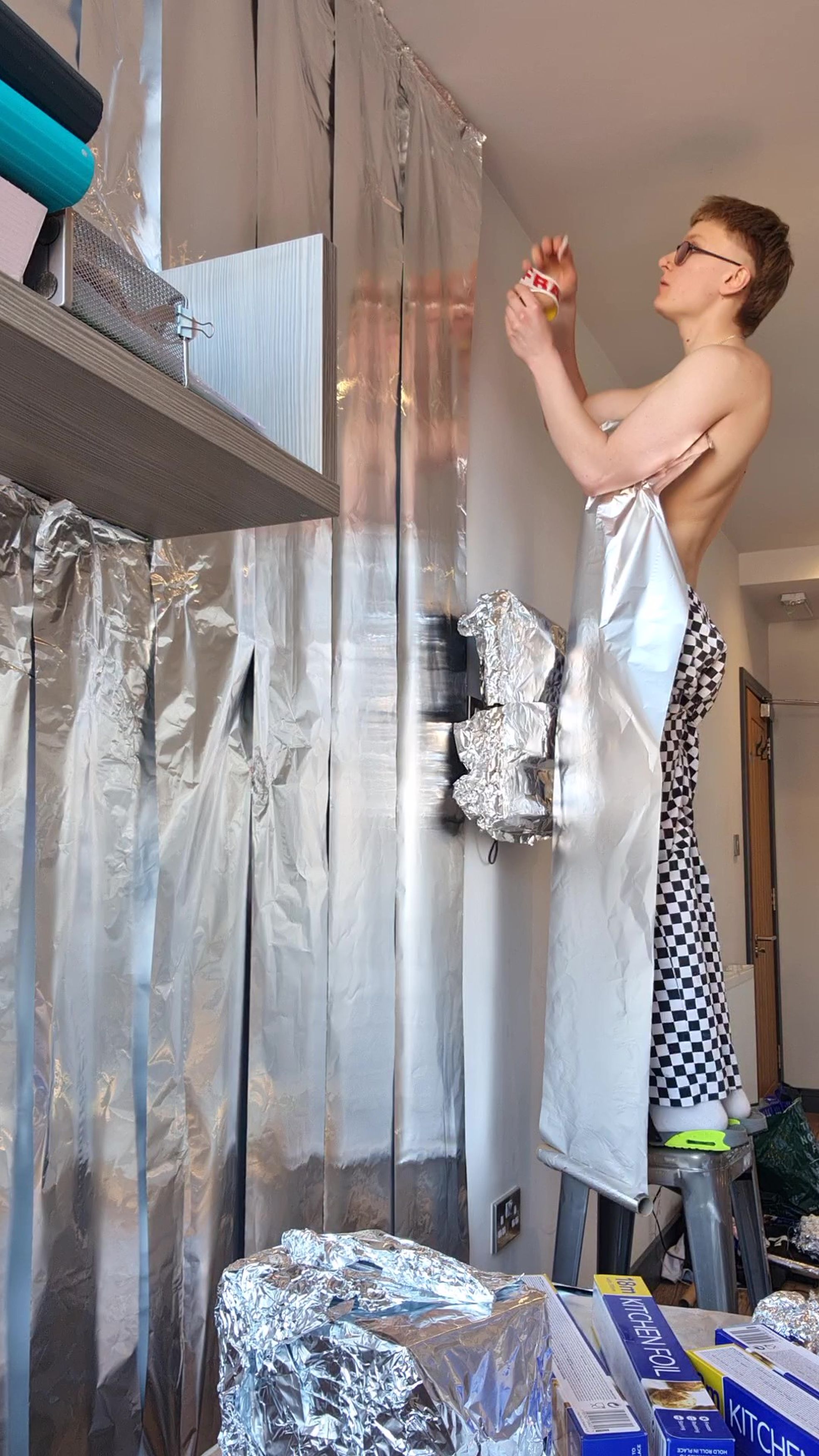 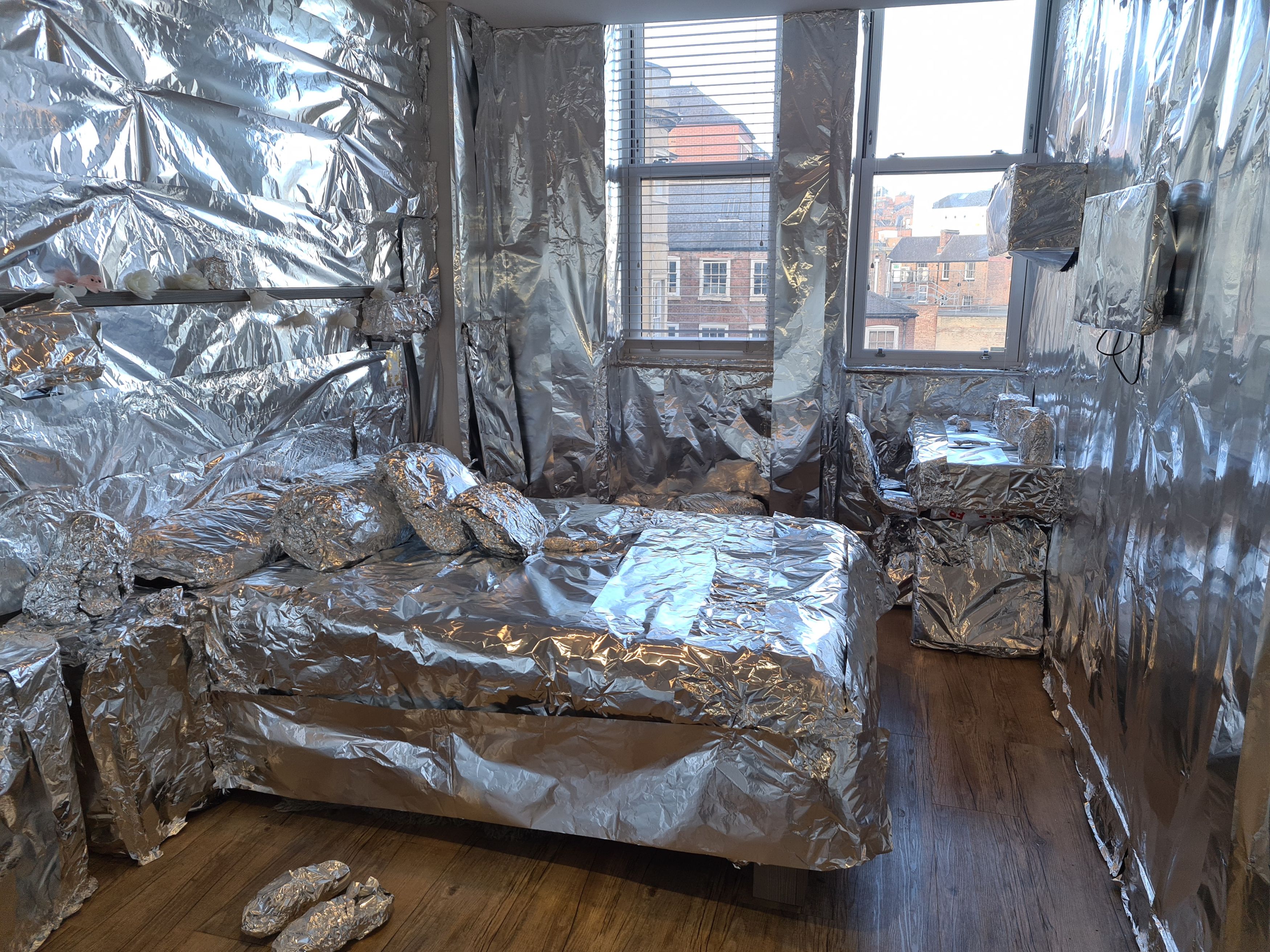 While Nat says his efforts were "completely worthwhile", an embarrassed Katy claimed she has been waiting for her pals to get their own back on her after her mattress-swapping that took place last month.

Nat, from Tring, Hertfordshire, said: "They never really lock their individual flat doors, so I knew her room would be unlocked for about a week or so and wondered what I could do.

"I realised that it's quite a hard, flat room. There's no soft furnishings, so I thought I'd cover it in tinfoil. I Googled it and there was a how-to, and I'm quite handy with DIY so I thought I could easily do this.

"I went down to Poundland and bought 20 rolls and a whole roll of tape. From start to finish it took me from 11am to 6pm with an hour and a half break for lunch."

He continued: "I started at the bottom end of the room, then realised it was going to take ages, so I started on the big things so if I didn't finish it, it would still look good. 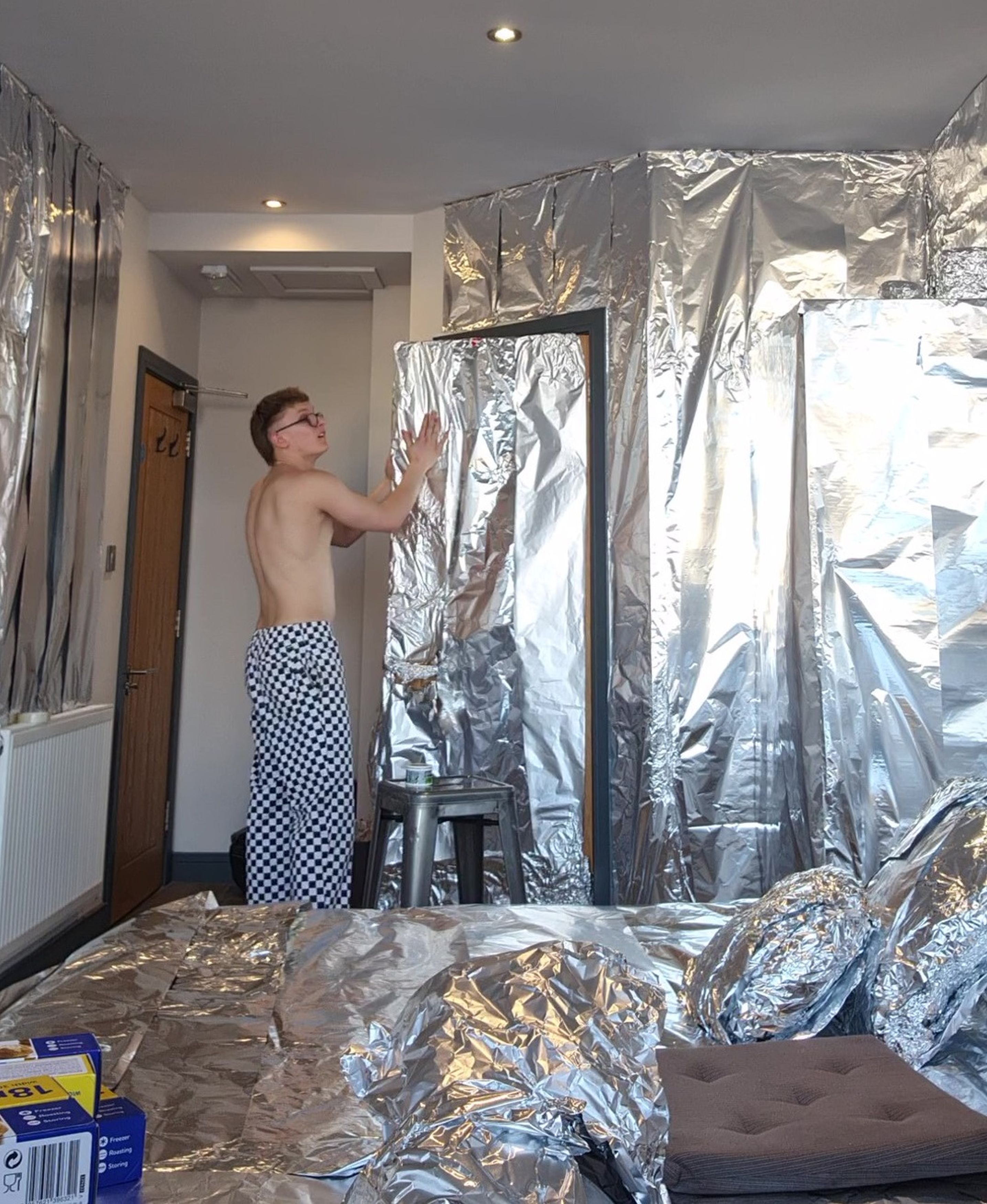 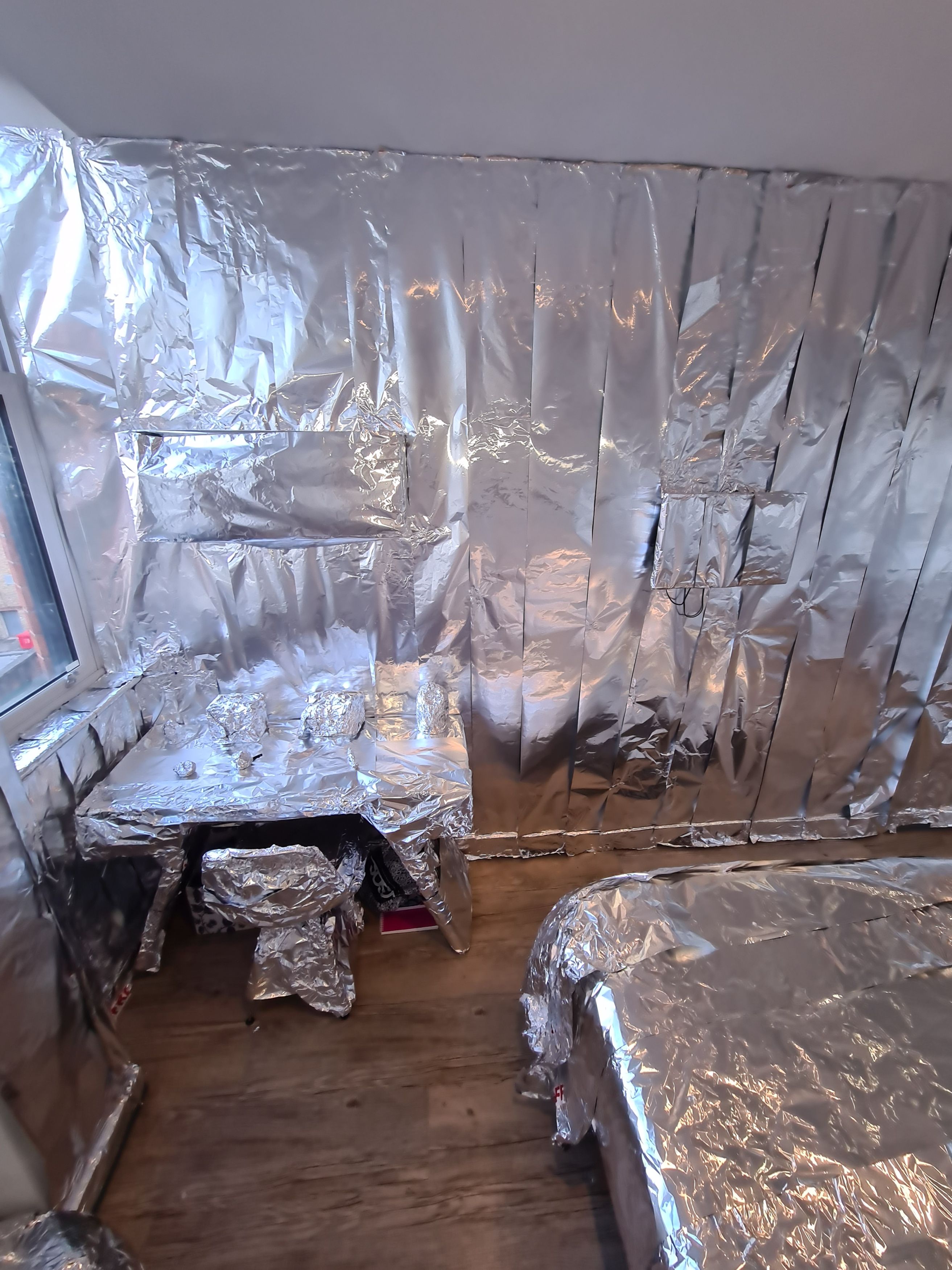 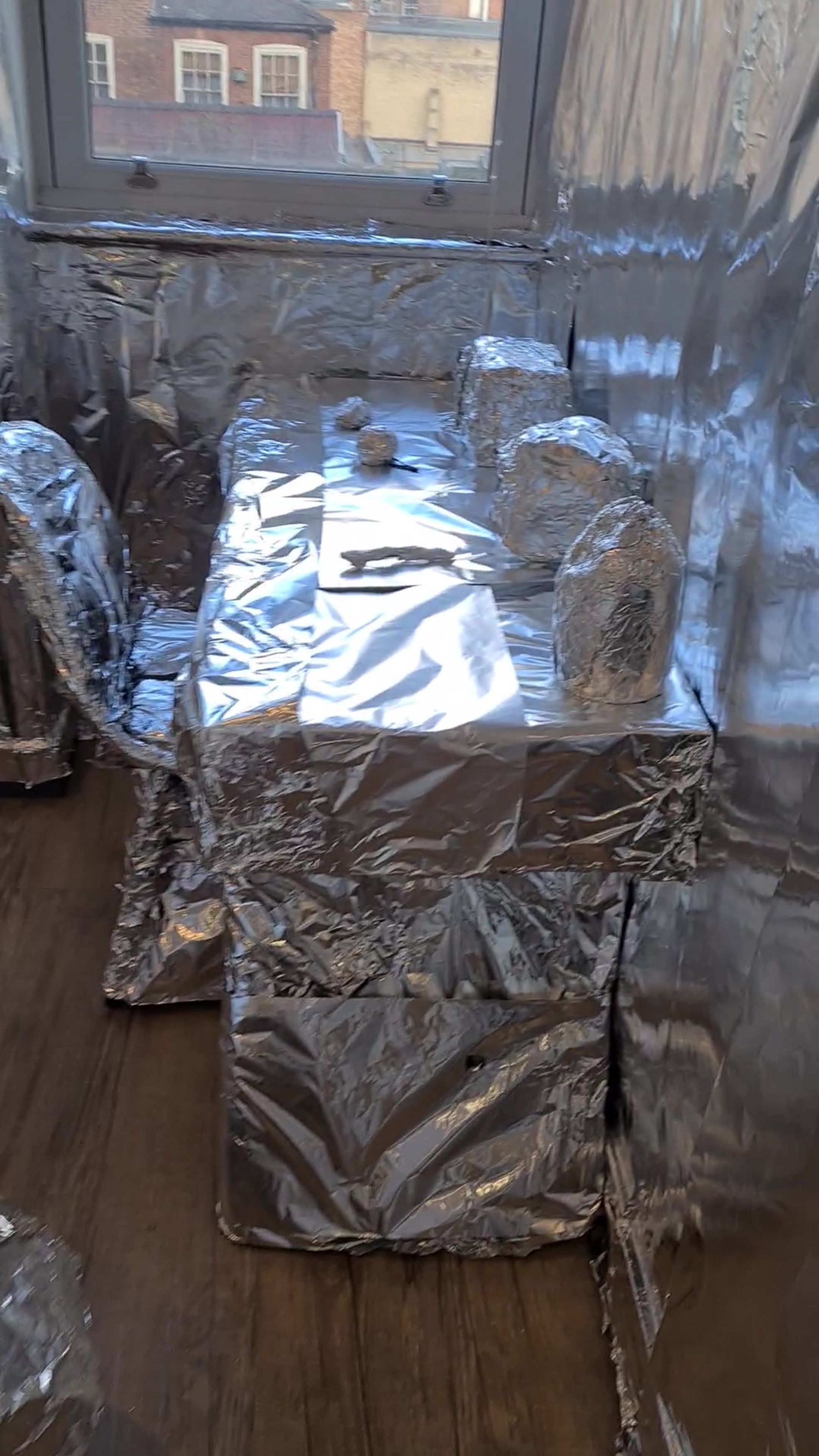 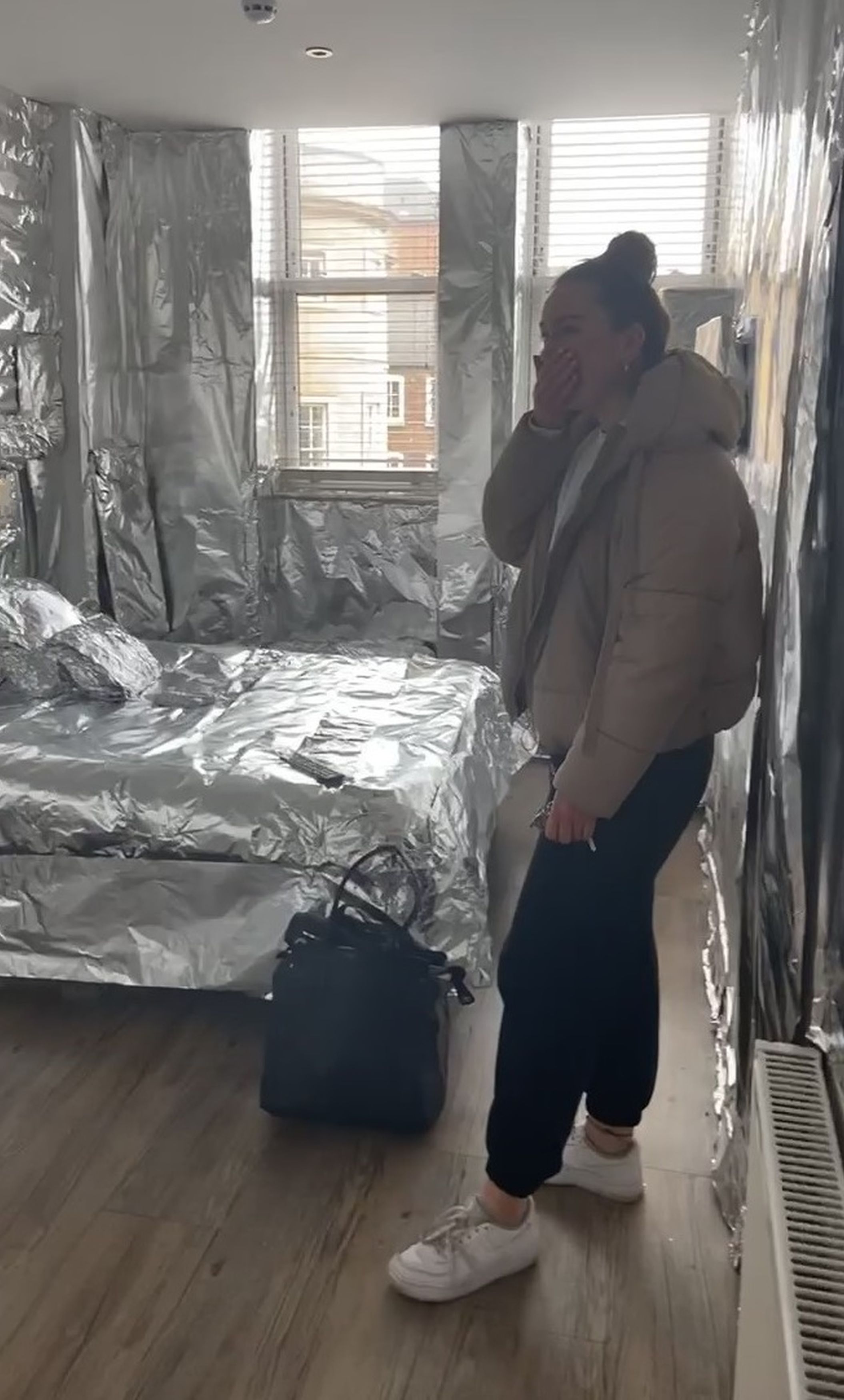 "The walls were quite easy to do because they were flat and straight, but the hardest bit was doing the bed and I had to get some help on that."

Nat said: "Katy wasn't very happy [about the dildo's involvement], But I thought, 'why not?', because it'd make the video funnier and I wasn't going to spare her the embarrassment of leaving it out."

Although, he did admit that he was worried Katy's dad would be the one to find the foil-covered sex toy, as he had been driving her home and could have potentially walked into her room before she did.

"I was having cold feet for the rest of the week, but luckily he stayed with the car," Nat revealed. "Seeing her reaction made it completely worthwhile. She was more in a state of shock than anything." 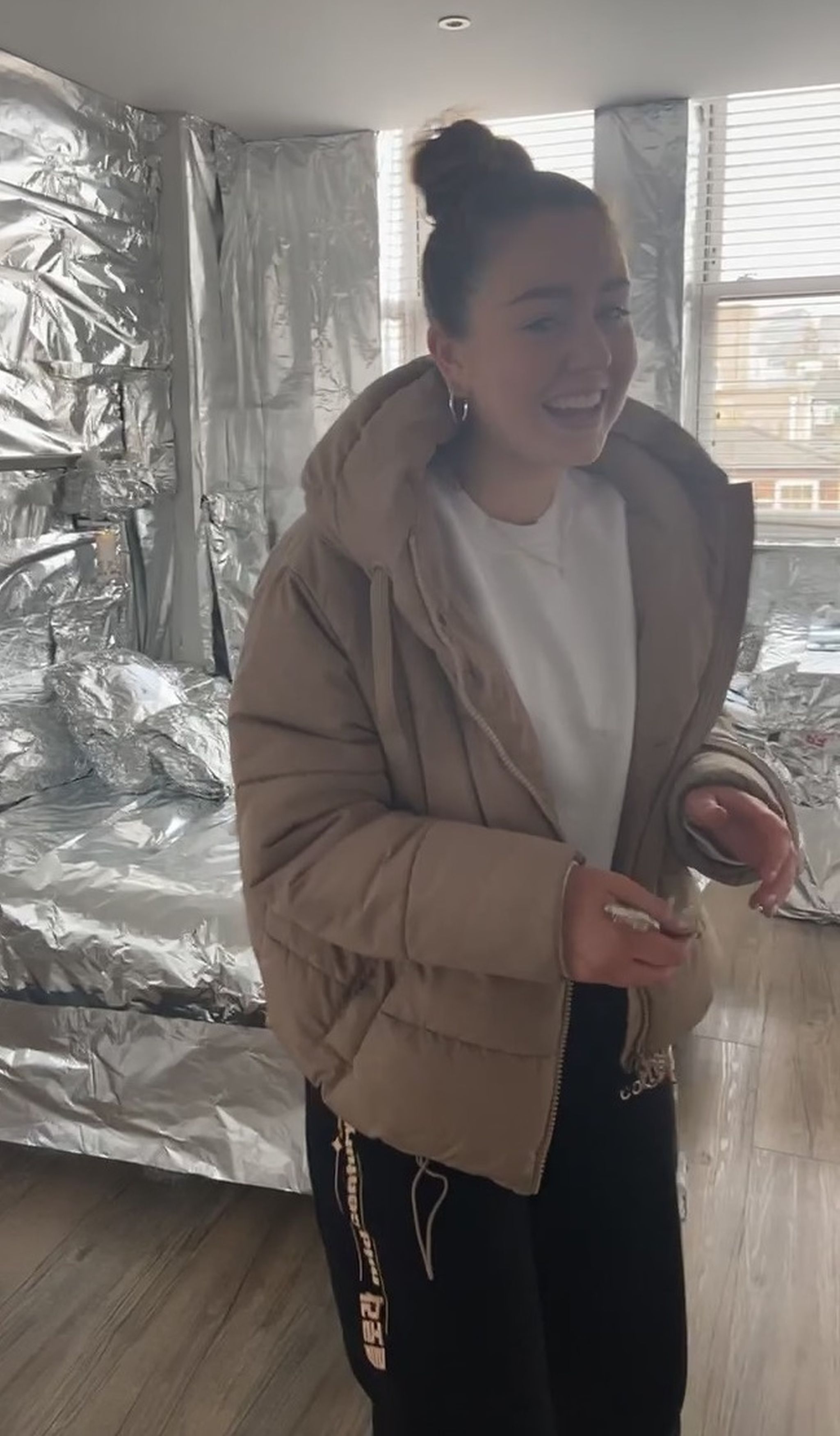 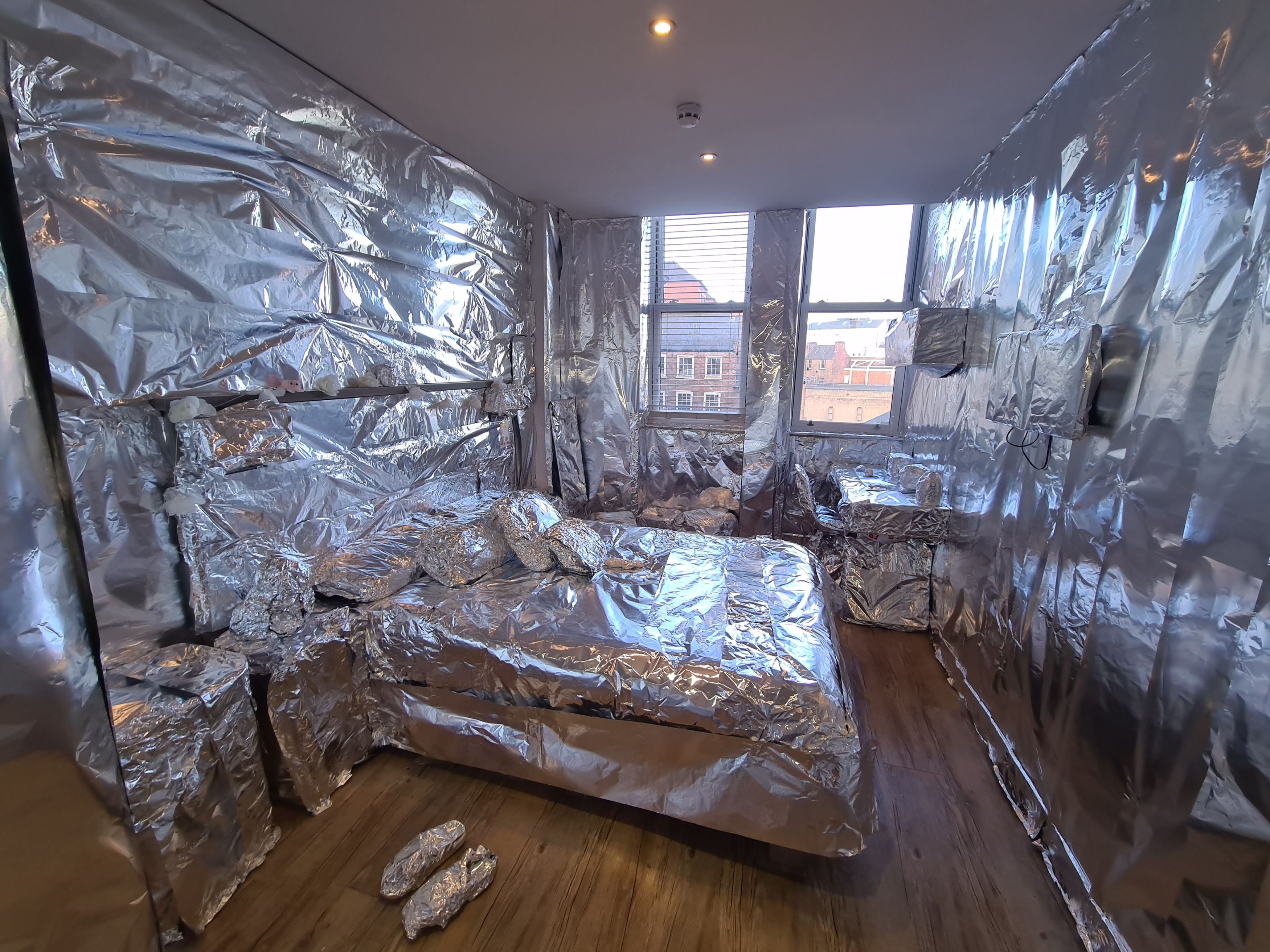 Nat said that Katy knew he was the one behind the tin foil, as he issued a warning to fellow uni students: "There's a lesson to be learned. You're 21-year-old, doing a masters degree. You have a key, use it."

Sharing her reaction, Katy said: "I was so shocked. I even looked in, then shut the door and walked back out again to check if this had definitely happened.

"I just didn't think anyone would go in there, but obviously I was wrong. I've definitely learned my lesson to lock my door." 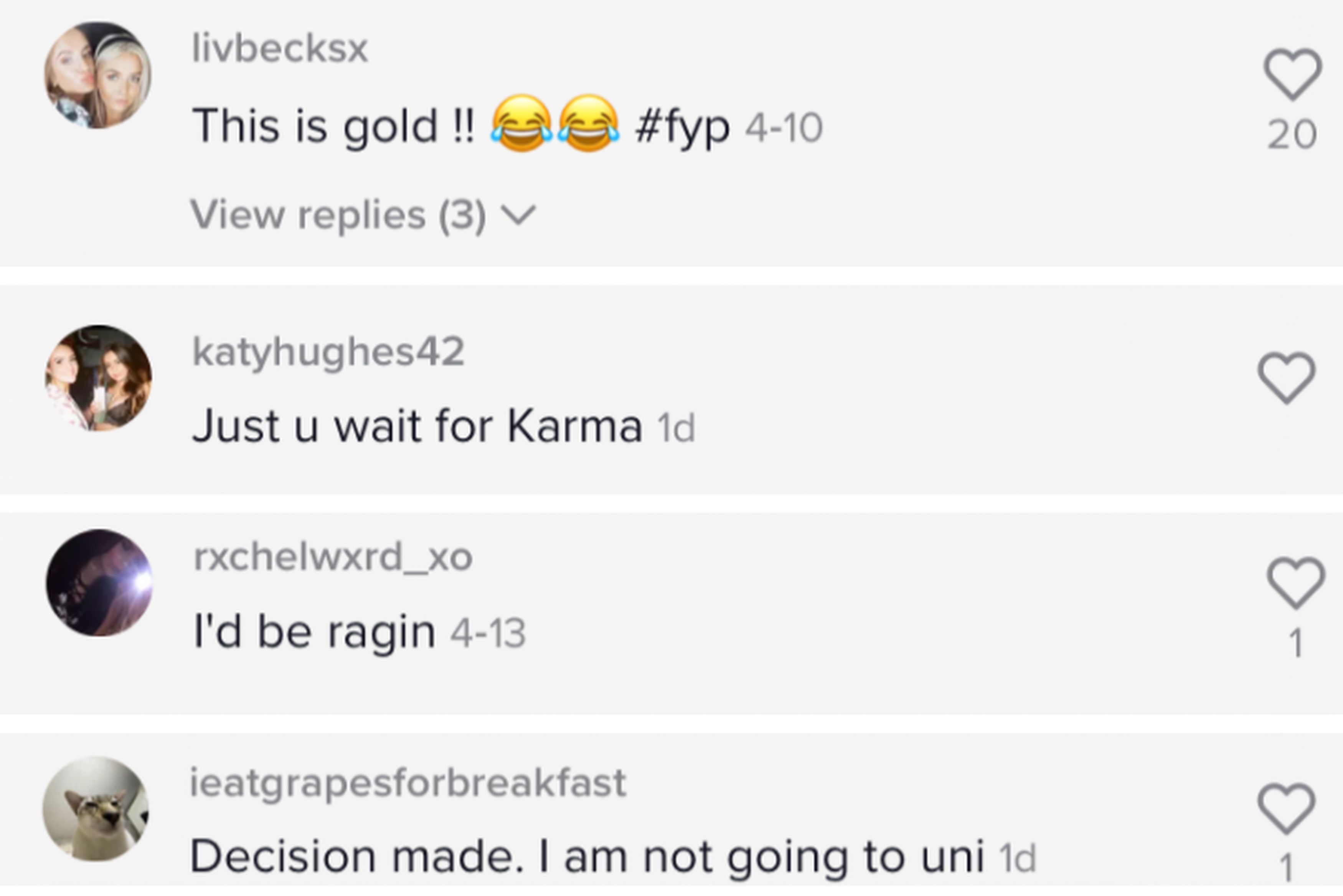 She confessed that it took her two days to pluck up the courage to take all the foil down and doing so took her an hour, with some foil still stuck on her walls.

Asked if she's keen to get her own back, Katy didn't seem too fussed. She teased: "If anyone thinks of how I can get revenge I'll go with it, but I wouldn't want to put as much effort in as he did. That was a lot.

"I'd go for something less time consuming and less expensive. £20 on tinfoil? What a waste."

Nat's TikTok videos have since gone viral, with people loving the prank.

One person commented: "Decision made. I'm not going to uni."

"This is gold," wrote another, while a third joked: "At least it won't be dusty. So kind."

"If someone did this to me, I'd undo the bed and tv and leave the rest," one more said, admitting: "I'm too lazy for that."

Meanwhile, one scorned woman surprised her cheating boyfriend by redecorating his room with text messages he had sent other girls.

Plus, one mum was unable to give birth naturally after welcoming 12lb baby boy so huge he went straight into 3-month clothes.

And one teen signed his mum up for an OnlyFans account just so he could get extra pocket money.

These Fuzzy Slippers Make My Feet Feel Like Royalty — Oh, and They're Under $25