A SUPER organised mum has revealed how to never spend more than half an hour cleaning – and you can even split it into three-minute chunks.

Gemma Bray, 39, from Manchester, who lives in Sevenoaks, Kent, has helped hundreds of thousands of women with The Organised Mum Method, known as TOMM by her fans. 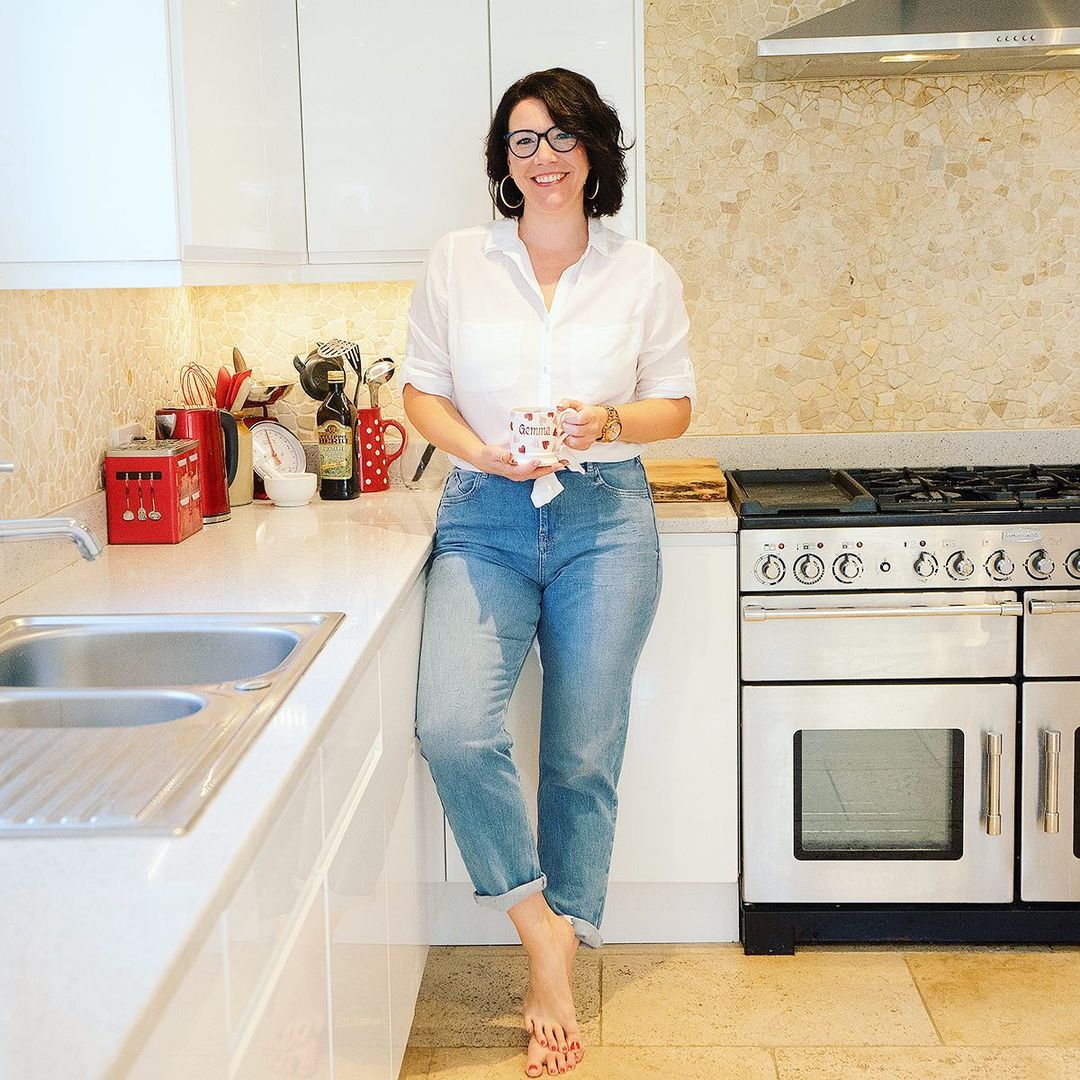 The mum-of-three's mantra is "there's more to life than housework" and her method came out of necessity – as she would spend up to four hours-a-day obsessively cleaning her house following the birth of her first child.

Gemma – who's mum to Tom 14, Johnny, 12, and Ben, five – tells Fabulous: "I spent my whole pregnancy envisioning how wonderful motherhood would be and was sold on this romantic ideal.

"The reality was nothing like that, I struggled and felt anxious – which manifested itself as over-cleaning.

"I was a stay-at-home mum while Tom's dad was at work, I felt lonely and isolated. 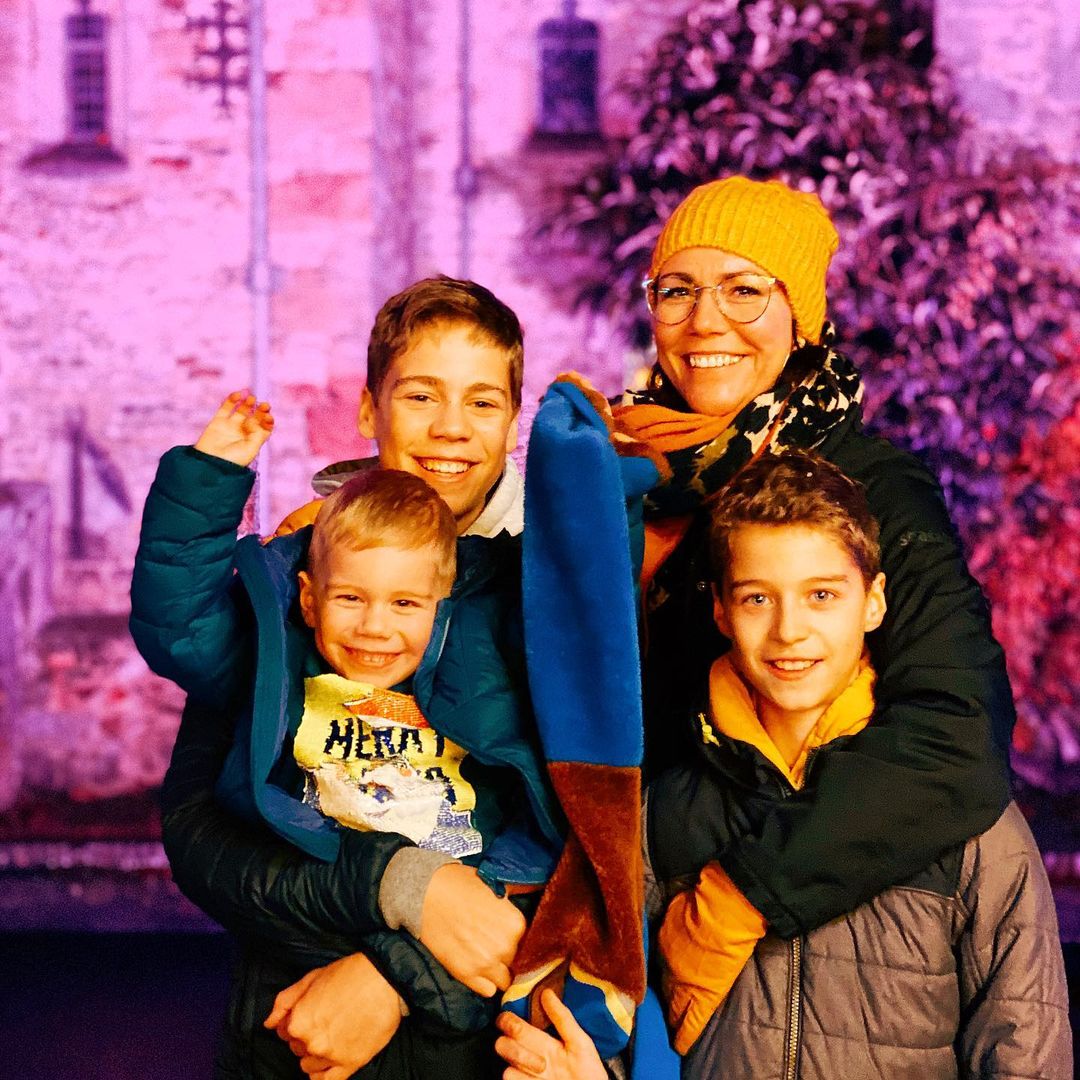 "I had this brand new baby who had thrown my life into complete disarray and the only thing I could control was the cleaning.

"I thought ‘at least if my house looks tidy then people will think I’m coping with being a new mum’, better than I actually was.

"It got to the point where I wasn’t going out to meet my friends because I was spending up to four hours-a-day cleaning.

"So I thought ‘this is becoming a problem, something has got to change’. I sat down at my kitchen table and came up with a way to keep on top of the housework and compartmentalise it.

I had this brand new baby who had thrown my life into complete disarray and the only thing I could control was the cleaning. I thought ‘at least if my house looks tidy then people will think I’m coping with being a new mum’

"It was a private thing I did for years, until Tom dared me to share it on Instagram on New Year's Eve 2016.

"At the time no-one was talking about cleaning on Instagram – it was full of fashion, beauty and sunset pictures.

"I said to Thomas, ‘I’m going to rock up with my mop and everyone’s going to be like "what’s this woman talking about?"’ but I gave it a go.

"The idea is to help busy parents get all the housework done as efficiently as possible." 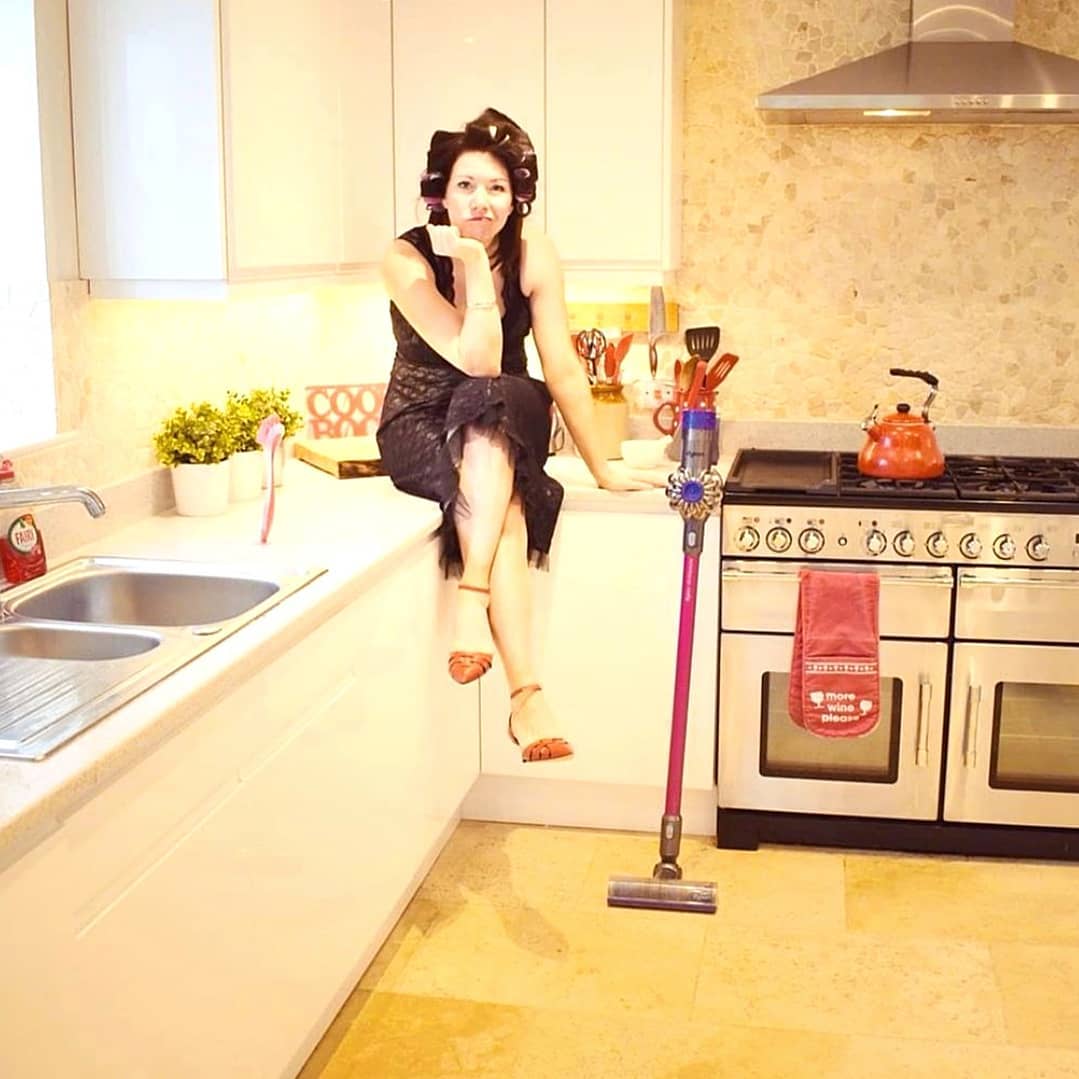 Gemma, whose husband of seven years Mike, 43, works in IT, went onto become a Sunday Times bestselling author with two books under her belt.

She paved the way for the likes of Mrs Hinch, who has 3.9 million fans, but Gemma says following her fellow cleanfluencers would be like taking a busman's holiday.

TOMM follows an eight-week rolling schedule, with set jobs for Monday to Thursday and the weekends off.

I recommend people don't look at it like one big 30-minute chunk of time, that can be quite tricky to find especially if you’ve got children. Think of it as three 10-minute chunks or even just one song bursts throughout the day

Gemma explains: "Monday’s the living room, Tuesday’s bedrooms, Wednesday’s the hallway and Thursday’s the kitchen. You spend 30 minutes in each of those rooms.

"Then every Friday you spend 30 minutes in a focus rooms – which could be the kids’ rooms or the bathroom.

"When you’re in the Friday focus you go one level deeper, you’re cleaning under the furniture, the skirting boards, you might have a bit of a declutter, it's a mini spring clean in that room, so your house gets cleaner over time.

"You never get to the point where you’re like ‘right the house is a tip, I need to do something about it now’. You eliminate the need for that big spring clean."

In addition to this half hour, Gemma recommends spending 10 to 15 minutes every day cleaning the toilet and sink, vacuuming the most walked over areas and doing one load of laundry.

She says: "These level one jobs will keep the house ticking over. I also do a quick clean inside the fridge before I put my shopping away." 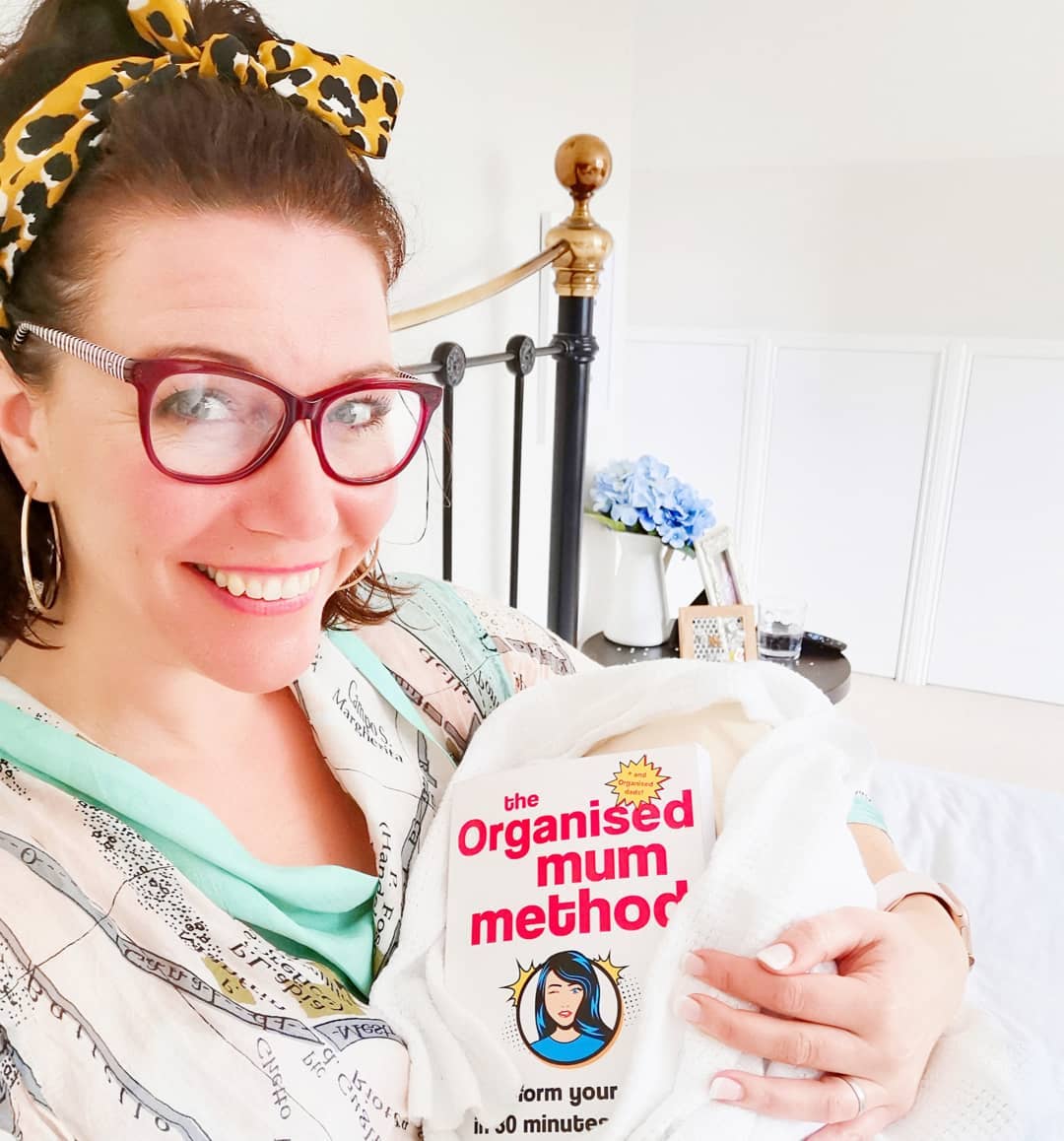 And if half an hour feels overwhelming, Gemma says you can do short bursts of cleaning instead.

She adds: "Despite being stuck in the house, we’ve all got much less time at the moment, especially if you’re homeschooling kids.

"I recommend people don't look at it like one big 30-minute chunk of time, that can be quite tricky to find especially if you’ve got children.

"Think of it as three 10-minute chunks or even just one song bursts throughout the day.

"If you’re working from home, set your timer to go off every hour, then get up and quickly do something for the length of a song. We have a daily playlist to make it more fun.

"One of the beauties of TOMM is because it’s quite strategic, you’re never cleaning the same thing twice.

"If you do find a spare five to 10 minutes in the day, you can quickly refer to the tick list or our app so you know exactly what you need to be doing.

"It takes away the need for you to think and breaking it up into smaller chunks works wonders. 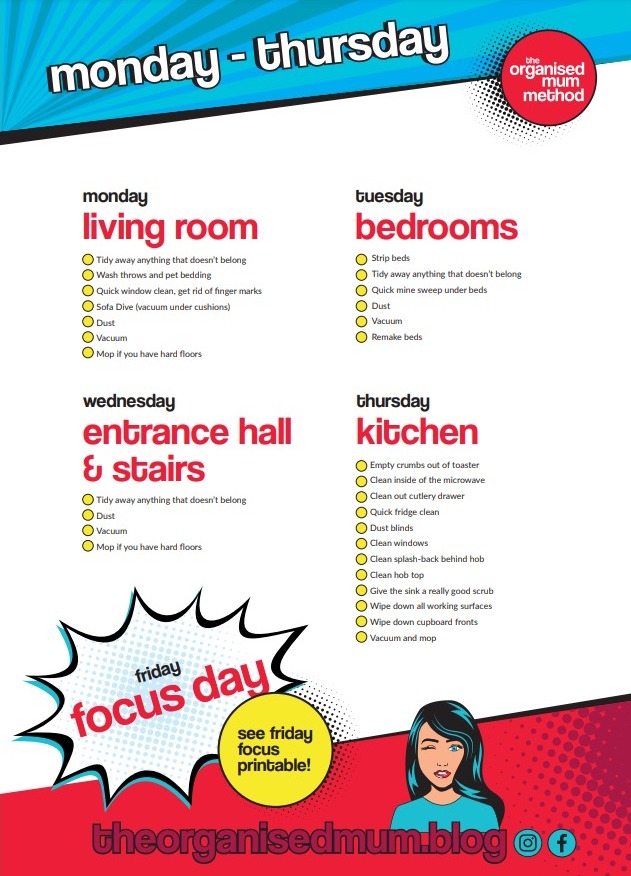 "The checklist helps you split the housework, too. Mike and me both have a login to the app and if I've got five minutes I'll tick some jobs off, then he'll do the same.

"We have free printouts on the website which a lot of people put on the wall or the fridge.

"It takes away the need to ask ‘can you help me with this?’

"That’s something that really infuriates me, we all live in the same house, we’re all using the same toilet and the kitchen, it should be a collaborative effort.

"Unfortunately the reality is, 98 per cent of the people who follow me are women. The majority of household duties do fall to women, I’d love it be 50/50 but it isn’t.

"I think having that list somewhere on display makes it more of a collaborative effort, which takes the arguments, stress and resentment out of it for couples. 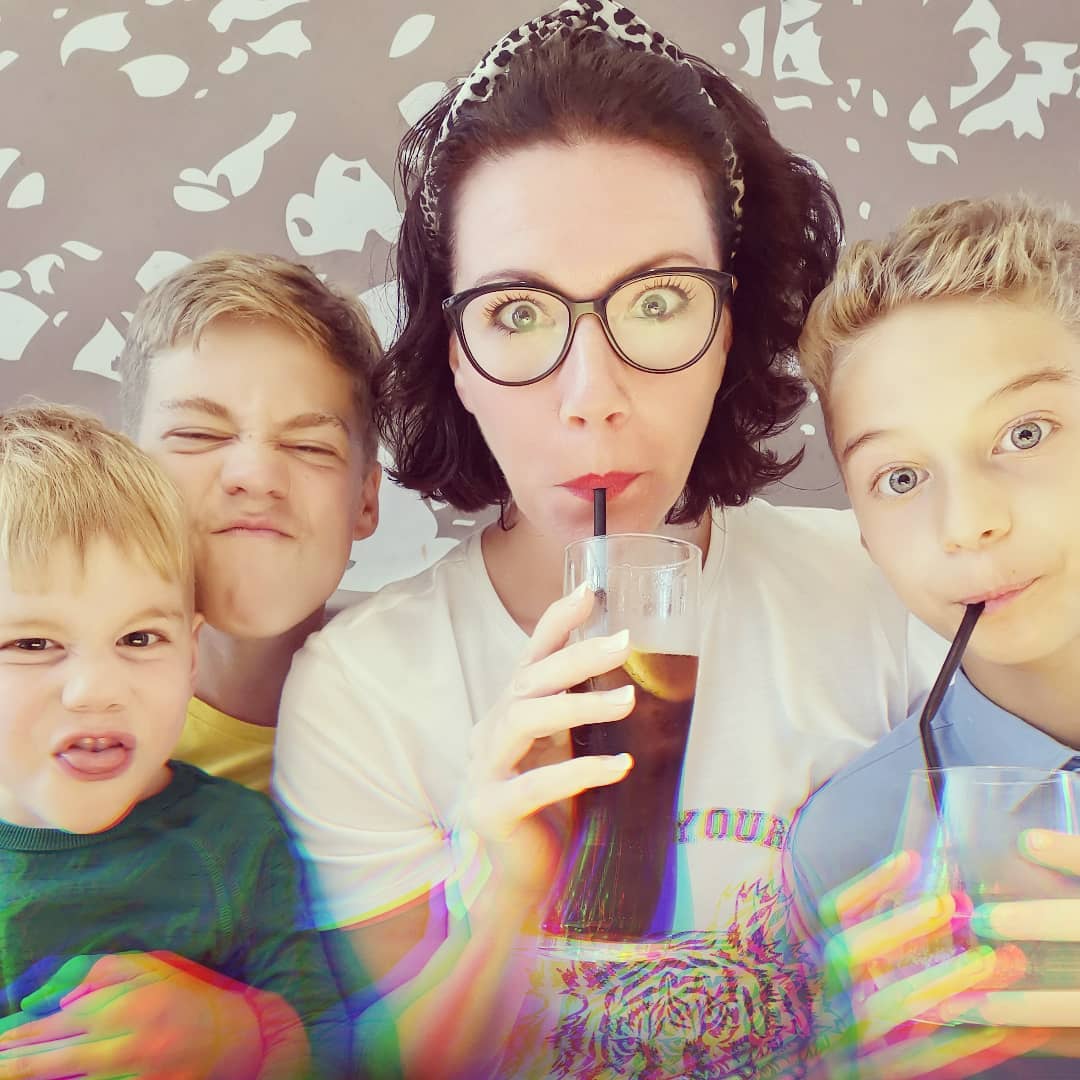 "My sons have set jobs too, I feel like it’s my duty to their future partners.

"They are in charge of cleaning their own rooms and unloading the dishwasher.

"If you're a perfectionist, it can be hard to let the kids take charge, because they might not make their bed to the same standard you would, but you need a bit of give and take. 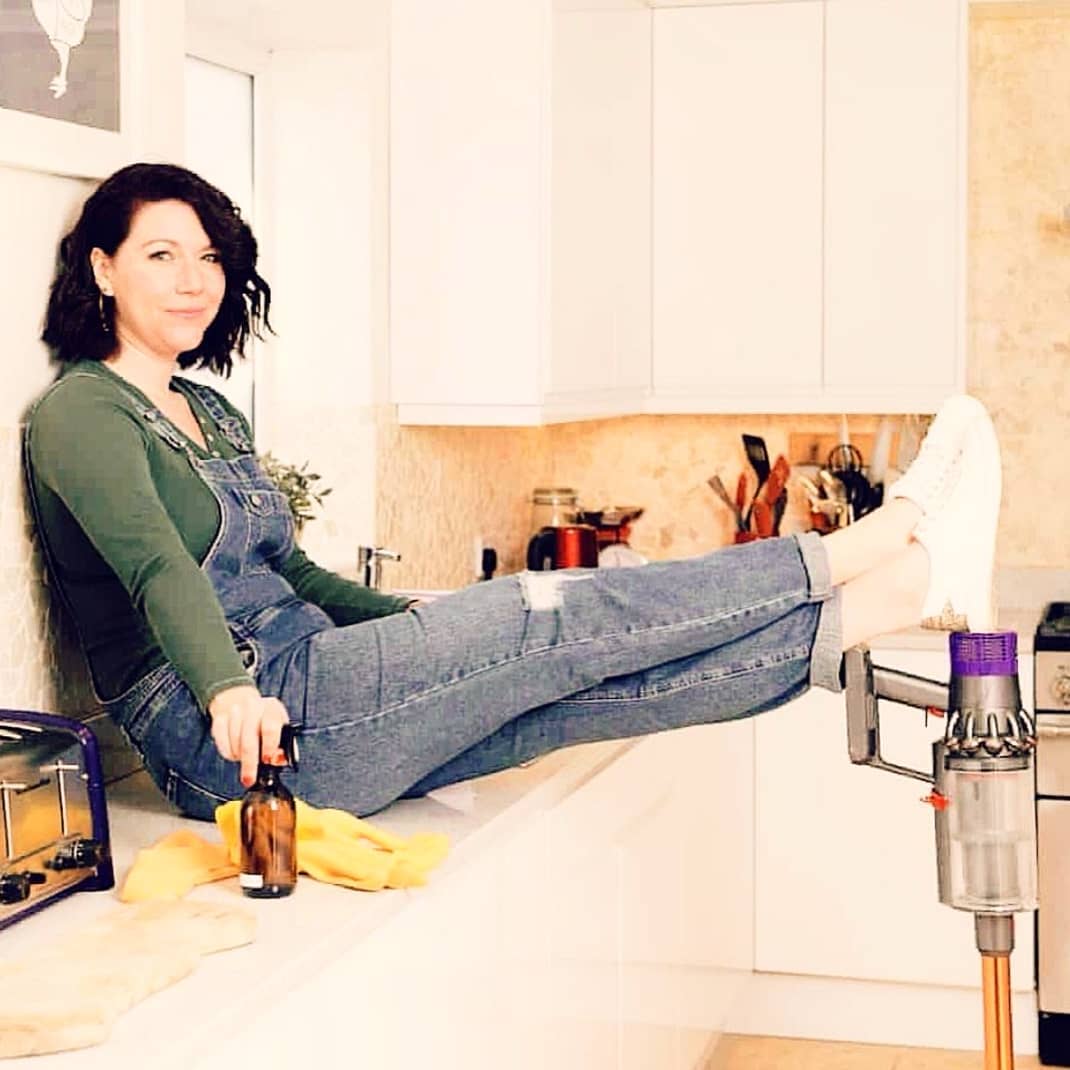 And when it comes to saving time, Gemma says there's some easy changes you can make.

She adds: "What I’ve noticed is, if you’re not sticking to a plan, people seem to be doing the same jobs over and over again.

"For me it was vacuuming, that was always my default job.

"Everyone is struggling at the moment, our Facebook group has got 110,000 members and they're all saying that.

"Just do your best, if you can only spare 10 minutes then that's fine. Don’t beat yourself up about it because there is more to life.

Vote for your Fabulous Mum of the Year and WIN

Do you know a mum who deserves some extra recognition? We want to pay homage to the best mums in Britain.

During the pandemic they’ve been busy juggling childcare, homeschooling and work, with the added stress of worrying about the health of elderly relatives and vulnerable friends.

It’s never been a harder time to be a mum, so this year it’s even more important to honour the amazing women in our lives.

Nominate her for our Fabulous Mum Of The Year Award and she could win an overnight stay for two at a Champneys spa of her choice complete with a Gold package, which includes four relaxing treatments for the ultimate pampering experience.

Two runners-up will Champneys goodie bag worth £50 plus a £100 M&S voucher and £200 Nutmeg at Morrisons voucher, and all three mums will enjoy a makeover with our glam squad before taking part in a photo shoot for the magazine.

If you want to nominate a mum then fill in the form here.

To enter, upload a photograph of the mum you are nominating and explain why they deserve to win.

The deadline for entries is Sunday February 14 and one winner and two runners-up will be announced on Sunday March 14. Good luck – we can’t wait to hear from you!

"Your house won't fall apart if you miss a day. I’d much rather someone go for a walk or to the park with their kids for 20 minutes, rather than worrying about cleaning their living room that day.

"And remember there's a difference between messy and dirty. A lot of parents with young kids waste time constantly picking up toys.

"It doesn't matter if there's Lego all over the floor when you've just cleaned the living room, just walk around with a basket at the end of the day and pick everything up.

"Otherwise you'll be following the kids around all day, tidying up after them, they're going to be constantly pulling stuff out.

"If you're worried you're spending too much time cleaning, I would say to trust the method. It's free so you've got nothing to lose by giving it a go."

Upgrade your kitchen, kid’s room and bathroom with the ultimate home and garden makeover – The Sun