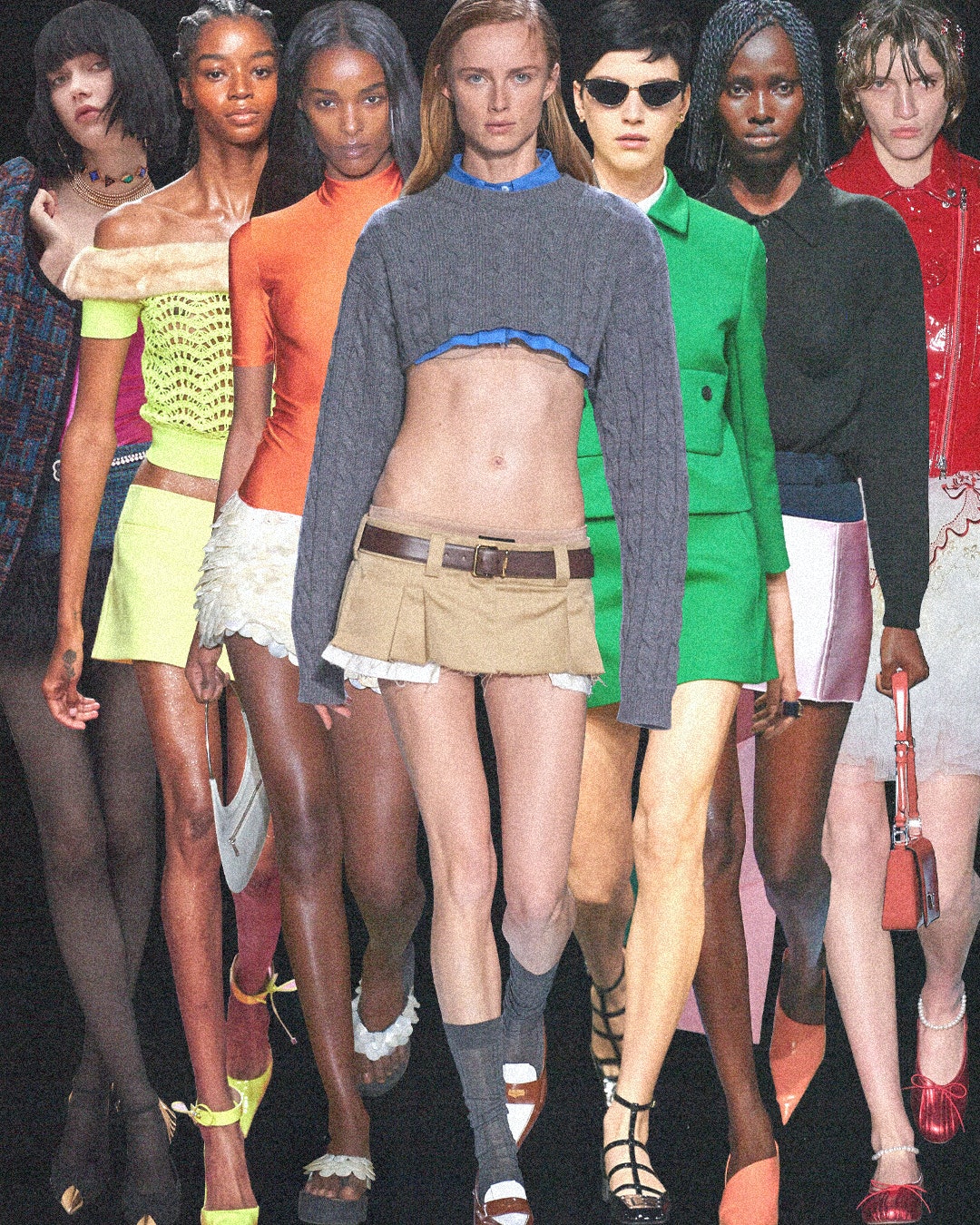 This season’s biggest trend is tiny. Meet the micro-mini skirt, a holdover from the going-out styles of the early to mid aughts, worn by all the biggest names of that era: Paris Hilton, Nicole Richie, Britney Spears, and Lindsay Lohan among them. The style re-emerged and began picking up steam on the runways earlier this year, when Miu Miu and Saint Laurent showed teeny skirts in embellished jewels and tweeds for fall 2021. Celebrities like Olivia Rodrigo, Bella Hadid, Rihanna, and Dua Lipa were quick to adopt the trend, mixing school girl pleated skirts and sporty renditions with Y2K staples. And who could forget Gen Z’s obsession with the tennis skirt, which dominated summer fashion this year?

There’s no question that the mini skirt—and more specifically, the micro-mini skirt—is everywhere right now, leaping onto the spring 2022 runways at Blumarine and Miu Miu—and all the way down to fashion obsessives on TikTok. For spring 2022, Fendi, Prada, Versace, Dior, Simone Rocha, and Moschino were just a handful of the brands reinterpreting the garment.

Yet Miu Miu was the most talked-about, showing barely there skirts that just skimmed by, paired with cut-out, midriff-baring shirts. It’s worth noting that both Blumarine and Miu Miu are styled by Lotta Volkova, making it clear that the fashion world’s coolest stylist had cemented the look into the upper echelons of style, regardless of how impractical minis may or may not be.

Looks from Miu Miu’s spring 2022 runway show, which sent the Internet ablaze with theories of the return of Y2K fashion.

Many designers and fans of the look are attributing micro minis’ appearances on the runways to what’s being called the “McBling” revival (a subset of Y2K style popular from 2003 to 2008) but for others, it goes further than that. Sintra Martins, the rising designer behind fashion brand Saint Sintra, says she was inspired by an exhibition on Mary Quant (the OG mini skirt designer of the 1960s) and credits Spongebob’s attire as being more inspirational than any Y2K styles. She has since put a focus on belted, pleated minis and frothy tutu styles.

“Mary Quant is often credited as the designer who popularized the miniskirt in the late ‘60s to early ‘70s, which is a great example of the 20-30 year trend cycle at play during McBling, and the resurgence we are seeing today,” adds Mandy Lee, a trend cycle analyst.

“I think the mini skirt is the perfect analogy for post-pandemic life, it feels a bit silly, somewhat useless,” Martins says. “Maybe, subconsciously, using less fabric also feels like a more fiscally responsible thing to do, from a design perspective. Perhaps there’s also a certain promise of promiscuity that comes with death being so imminent. It feels like, collectively, we’ve decided to throw respectability politics to the wind. Mini skirts give me ‘good for them’ energy. Especially since we have to cover our faces in public with masks, what else can we do but show our legs instead?”

Saint Sintra being inspired by the 1960s designer Mary Quant feels like a full-circle moment in more ways than one. With many people still working from home, wearing masks, and even preparing to get booster vaccination shots, the pandemic is very much on everyone’s minds. When the mini skirt made its debut in the 1960s, it went hand-in-hand with protests and conversations revolving around youth culture and feminism. The mini today conveys a sense of power and owning oneself. “With Texas’ SB8 and the fact that the pandemic pushed many women out of the workforce into more traditional roles, it really feels like we are in the midst of a sexual backlash against women,” adds fashion historian Einav Rabinovitch-Fox. It’s possible that the mini, for many, is connected to a feeling of bringing those ideas down.

Still, with the revival of the mini on the runway and its close relationship to the body, it would make the trend feel a lot more forward-thinking if aforementioned labels showed it on different body types. After all, we’ve moved past the lack of inclusivity of early Y2K fashion. “Something that worries me is this trend seems to be a nod to the heroin chic look of the late ‘90s that glorified thin bodies over actual style or fashion,” adds Lee. If today’s mini skirt isn’t a reaction to the same political ideas facing the 1960s when it originally made its debut, it very well could be about celebrating diversity—if designers would go in that direction. Perhaps as the trend trickles down, the mini of the moment will embrace inclusivity.

“The revealing of skin and legs—whether in the 1920s or with minis in the 1960s—was also very much connected to the rise of women’s visibility in the public sphere and with the feminist movement’s gains,” explains Rabinovitch-Fox. “I’m not surprised about the trend of revealing clothes, I think it is very much about the idea of getting out of our cocoons post-pandemic. We all need an extra dose of vitamin D after being locked in our houses for so long.”

But there’s one major difference in the first and last generations of the mini skirts coming down the runways and worn on our favorite celebs. While the past conveyed sex appeal and femininity, the minis shown on the spring 2022 runways are about owning one’s power in a different way. Miu Miu, for example, presented boyish silhouettes, blurring the lines of gender with khaki skirts and navy sweaters akin to a new kind of uniform; there were hints of intellectualism. Simone Rocha, on the other hand, symbolized power in femininity with voluminous petticoats paired alongside slick and sculptural leather jackets, a testament and tribute to the designer’s experience with motherhood. The mini today is about dressing for oneself, rather than putting on a skirt to satisfy the male gaze.

“Today, not only has the mini lost its radical factor, it has almost lost its sexual connotation,” adds Rabinovitch-Fox. “You can see it in particular with Miu Miu—despite the clothes being very revealing, there was no sense of sexual appeal, certainly not a sense of hyper-femininity, which was what the 1960s mini was all about.”

There’s another reason why the garment is suddenly trending, too: corsets may have been the most fashion-heavy item to show skin these past few years, but the micro-mini represents a similar aesthetic in that it shows skin and puts the body on full display. “Paris Hilton’s signature micro-mini, which mimics the same coverage as a wide belt, appears to be the blueprint to this style,” explains Lee. “While not inherently an undergarment, it can fall into the underwear as outerwear trend along with corsets, bloomers, tap shorts, etc. due to its length and coverage, or lack thereof.”

A cursory search on Depop reveals that the mini skirt truly is one of the most talked-about and popular items of the season. But how it materializes as the world of high fashion continues to experiment with the style will be even more interesting to see. “I wouldn’t be surprised to see micro-mini shorts and skorts appear, as they are a bit more functional, in fabrics like delicate lace, leather, satin, tulle, and textures like pleats, embellishments, perhaps even volume,” Lee says. “Or styling the micro mini as a layering piece, over jeans, pants, and longer skirts—in true Y2K McBling fashion.”

How short will you go this season? The choice is yours.

This is how to nail a bridal outfit change, the celeb-approved way