What is it with designers bringing back their greatest hits? 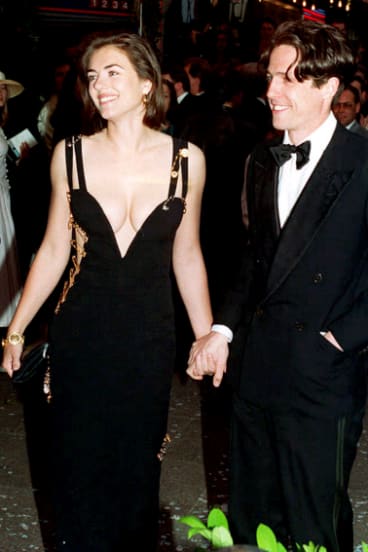 Liz Hurley, wearing the iconic Versace dress, with her then boyfriend Hugh Grant in 1994. Credit:AP

First, Donatella Versace offered an ode to her brother Gianni's archives, as well as to his most celebrated supermodel moment, in 2017, on the 20th anniversary of his murder; then Fendi brought back the baguette bag; then Marc Jacobs announced his "grunge redux" collection, which officially goes on sale this week.

And on Sunday night in New York, Versace was at it again, reincarnating the notorious safety-pin gown of 1994. You know: the one worn by then fairly unknown starlet Elizabeth Hurley, who was accompanying her boyfriend, Hugh Grant, to the premiere of Four Weddings and a Funeral, catapulting her to paparazzi stardom overnight.

Also, the palm-tree-print chiffon number that Jennifer Lopez wore to the Grammy's in 2000, which won the public's eye that night. 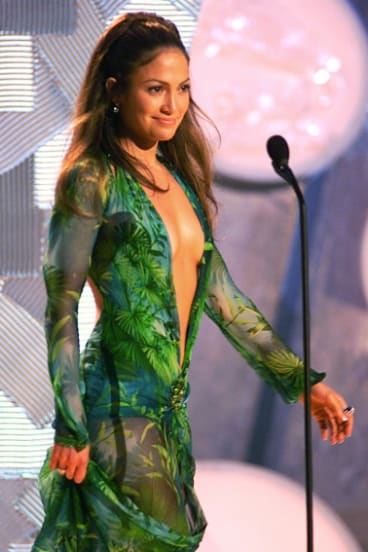 Versace has also revived the Jennifer Lopez ‘palm’ dress from the 2000 Grammys.Credit:AP

Well, musicians do it, not to mention Hollywood (Mary Poppins Returns, anyone?), so why not fashion? There's always been a lot of mutual admiration and back-scratching between the two industries, after all.

And you can understand the thinking, in the current uncertain climate. It worked very well once; why shouldn't it work again? Plus, on the constantly churning fashion hamster wheel, it takes a little creative pressure off designers to constantly make something new and fabulous. Instead, they can give you the familiar and fabulous!

The occasion for the Versace trip down memory lane was the brand's first pre-fall collection show, its first show in New York and its first show as a member of the Michael Kors family – sorry, the Capri Holdings family (remember, the holding company has been renamed, now that it's a group). As a way of announcing Versace's new status and suggesting that, contrary to some fears, being owned by a US company would not make the brand forget its roots, the show was a pretty high-profile statement.

"Donatella came to me and said she wanted to do something big, and I was all for it!" John D Idol, chief executive of Capri, said before the show.

It was the first Versace show he attended, and he was wearing his first Versace suit (black, slim-cut), as well as a pair of Versace Chain Reaction sneakers (also black, with white soles). He was very excited.

He was standing on the edge of the cavernous former trading floor of the old American Stock Exchange, where the show was held. In the centre of the room was another recreation: the hand holding the torch from the Statue of Liberty — but this being Versace, it was gilded. Which was part of a whole ode-to-New-York thing that Versace saw as important to the collection, as well as being part of an ode-to-female-freedom thing (ditto).

The overarching theme, though, was again an ode to her brother, down to the fact the show was held on his birthday, Dec 2 (he would have been 72). And that one of the prints – a multicoloured heart number that replaced the palm trees that had been on ye olde J Lo dress (worn in Sunday's show by Amber Valletta, who also wore the original palm-tree dress on the Versace runway) – came from artist Jim Dine's work for Gianni's New York townhouse, which the designer had also used in a collection in 1997.

Because you can bring back the past, but you have to update it a little. Otherwise, it just looks like a lack of imagination.

So the oversize gold safety pins of fashion legend came not just on a slinky black gown slit up to here and sliced down to there, more asymmetric and twisty than the original, but also on nipped-in black jackets, holding together seams on the back and shoulders and paired with cropped mohair sweaters (stomachs were a prime erogenous zone) and black miniskirts.

Because you can bring back the past, but you have to update it a little. Otherwise, it just looks like a lack of imagination.

They also, not coincidentally, showed up half a world away on a bright yellow custom-made Versace jumpsuit that Beyoncé wore over the weekend at the Global Citizen concert in South Africa. It, too, was inspired by the pre-fall line (see! synergy!), highlighter shades being another part of the collection, although back on the New York runway they came in the form of vinyl minidresses. Which were in turn mixed in with a whole wild kingdom of not-in-nature animal prints themselves (and fur, though the fake kind), which were mixed in with the brand's signature Barocco swirls of gold, black and white, and more hearts, for men and women no matter.

Oh, and there were sneakers. Cat's eye bejewelled sunglasses and crazy 1960s' bouffants. One "I Love New York" Medusa-head T-shirt. Also lots of gold buttons, and even more celebrities, including Kim and Kanye, Bradley Cooper, Lupita Nyong'o, 2 Chainz, Paris Jackson and Blake Lively. So did the models, who stayed on the runway to sip Champagne and dance around in their new-vintage finery after the show was all over.

It was all a little head-spinning, in a Dr Who kind of time-travelling way. What decade were we in? Does it matter? For anyone who's not just playing dress-up, it should.

Before the show, Donatella tried to sum up the difference between then and now in her own way: Today "you can wear a short dress and a pair of sneakers and that's not sexy any more, it's cool," she said. It was a good try, and pretty fun to watch, but all this back-to-the-future-ness is starting to seem less and less convincing.

When is Neptune in retrograde in 2021 and what does it mean for your star sign?