If this sturgeon had sneakers and slippery post moves, she could dominate the basketball world.

She already has the pro-style size at 6 feet, 10 inches and 240 pounds. But her age might be an issue. She’s probably older than 100, officials say.

The “river monster,” presumed to be female, was captured by a crew surveying the Detroit River near Grosse Ile in Michigan last week, the Alpena Fish and Wildlife Conservation Office wrote on Facebook. Not surprisingly, it’s one of the biggest lake sturgeon ever caught in the U.S., according to the office. 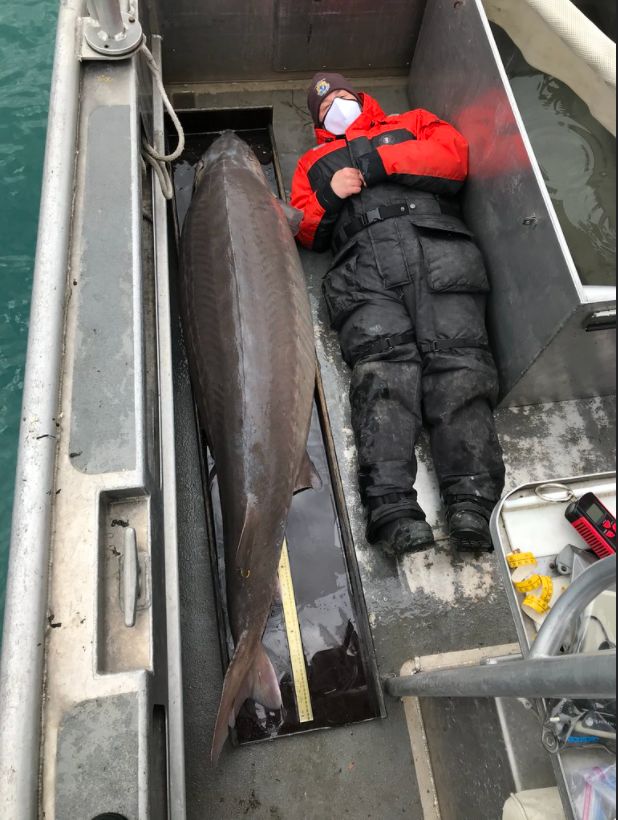 While tagging the massive creature before “quickly” releasing her back into the water, the crew took a picture of the fish and 5 foot, 6 inch crew member Jennifer Johnson lying side by side. One Facebook jokester wrote she could be the “sturgeon general.”

Johnson and her U.S. Fish and Wildlife Service colleagues Paige Wigren and Jason Fischer had five lines in the water last Thursday and one lured in the whopper, the Detroit Free Press reported.

Hauling the fish aboard took several minutes. “It took all three of us to heave her over the side of the boat,” Wigren said to the newspaper.

The Alpena Fish and Wildlife Conservation Office called it “a once in a lifetime catch.”