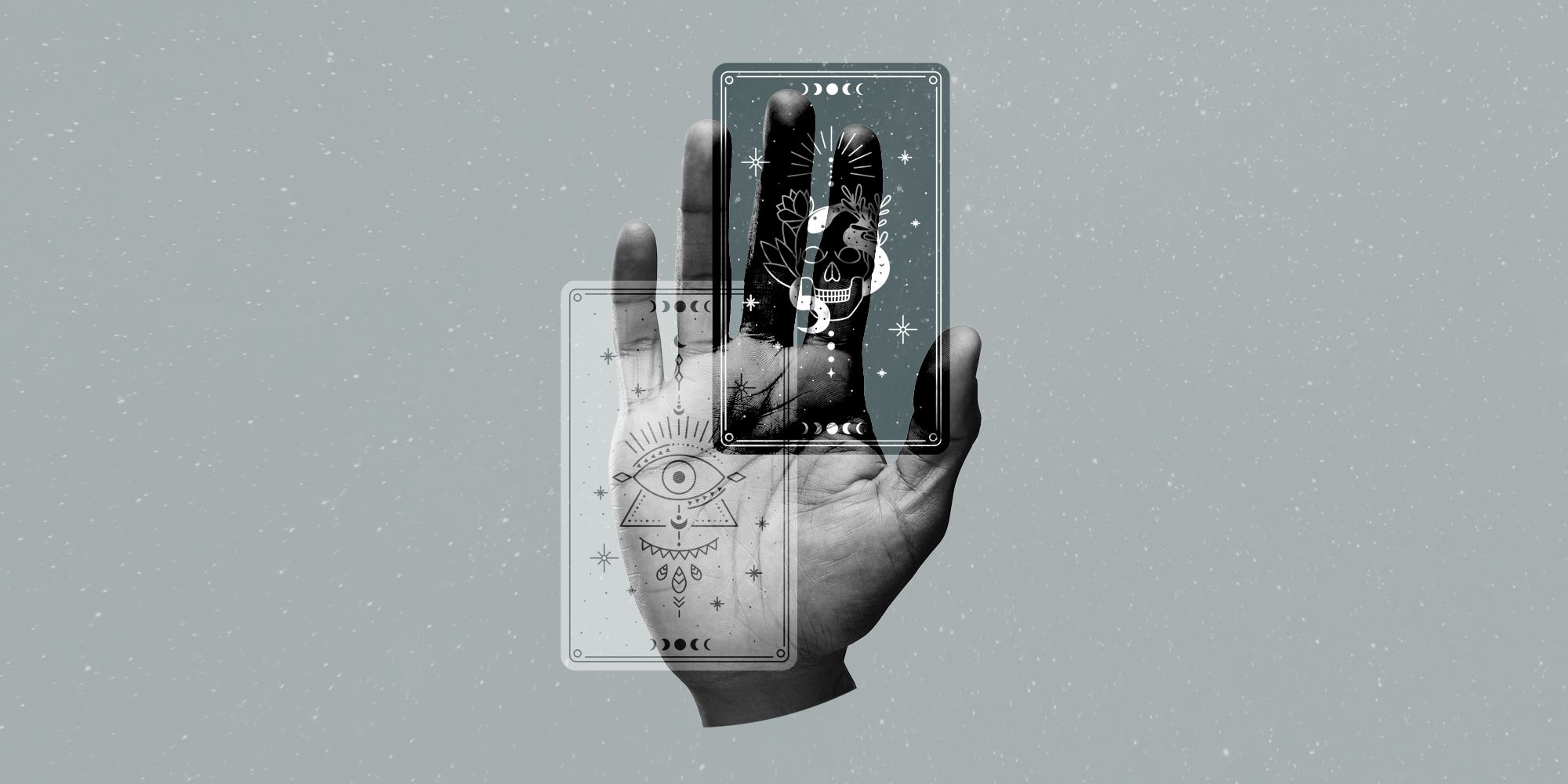 My initial dalliance with tarot happened when my first proper relationship was nearing its end. The reading was done via a three-card spread.

The card of heartbreak flipped first. Fitting really. My (then) boyfriend of three or so years abruptly called it quits, and I needed—wanted—answers he couldn’t seem to give. Being a child of the millennial era and the daughter of a God-fearing immigrant, I, of course, believed, more so then, that all things had meaning. And should I want earnestly and deeply enough, the desires of my heart would be granted. After all, my boyfriend and I had just indulged in a pricey, romantic birthday dinner. This had to be a blip in an otherwise beautiful love song. Nothing some cosmic intervention couldn’t fix. The next message would be better.

I looked toward my friend who was shuffling the cards. This surely had to be a joke. “Babe, how many stabbings are in this thing? You sure you’re, y’know, slicing and dicing it properly?” She laughed and shuffled some more as I squinted at the second morbid member of my soon-to-be trio. A body impaled by 10 silver blades. “End of a cycle,” my friend responded, as if reading my mind. “Ready for the final pull?” I shrugged. There was a knot in my stomach, and everything suddenly felt as though it rode on this.

At least there were less swords. The Five of Cups shows a black-caped figure looking over three spilled cups, with two remaining upright. I didn’t need an explanation. Everything had already been said. I remember blinking away tears as I looked down at the literal hand I had been dealt. It was fate. I was fighting for something that was over.

How accurate the reading was or was not isn’t so much the point here, but what I do wonder, however, is whether it’s possible to want to know too much about oneself and one’s future. Do we shroud our need for control in crystals, cards, and oracles?

Tarot isn’t anything new. Neither is existential anxiety. The former, although starting off as a parlor game, has been around since the 15th century. However, the cards didn’t become tools of divination until at least the 1800s. The name tarot is derived from the Italian tarocchi, with its derivative, taroch being a synonym for foolishness. Combine this with apophenia, which has been practiced by humans ranging from soothsayers to my mum’s troubling dream, and I often find myself in a near constant state of celestial anxiety.

I have to be honest with myself and my sudden spiritual quest. How much of my newfound interest in New Age practices is stemmed from a need to feel like I know what is going on with my life? 2020 was one of the most tumultuous and directionless years in recent memory, so it’s no surprise that anyone born after 1989 is looking for concrete answers. And especially when I need answers where there are none, even the tiniest glimmer of hope feels like an apparition from the heavens. A tarot reader I sat with recently noted that I shouldn’t take his ring falling off as part of the message; before I could note I hadn’t even noticed, he proceeded to mention, “People read a lot into things during these sessions. I’ve had people ask for redos, because it suddenly started raining.”

I’m not the only one in need of celestial Xanax, of course. There are now allegedly CEOs in existence who will not conduct trade business during Mercury retrograde, or will fire staff based on their astrological birth charts. Not everyone will find themselves at this extreme, but we also need to be honest with ourselves about the nature of our prophetic desires. How much of my soul searching is truly just unhealthy preoccupation with my own existence? How much do I really need to know about what lies ahead? Manifestation is de rigueur, but it can easily be used for the opposite of its intended effect. Desire is an apt fuel for personal drive, but where I’m headed may not always be of long-term benefit.

To quote another New Age practice, the middle way is the key to happiness. I needed to balance my understanding of the way the world works and my wants to flourish within it.

Even the tiniest glimmer of hope feels like an apparition from the heavens.

After my first tarot reading, my ex and I eventually parted ways for good and have become anecdotes in each other’s lives. I suppose a part of the trio did come to pass. On the Five of Cups, there are two cups that remain upright as a reminder that there is always something you can salvage from loss. Heartbreak hurts, but you make it out to the other side wiser. Life will continue to be unpredictable, but I see tarot as a means to trust my intuition—pulling through messages that already exist in my mind and cause me to pay attention to the gut punch that has always been there.

As I ended my latest reading—having left my job in the middle of a global pandemic, moved housing, and cautiously dipped my toe into the monogamy pool—the reader’s final words stuck with me: “Life is so much better when it isn’t tightly planned. You just have to believe that if what you want is right, it’ll find you.”

I think the greatest self-awareness is to know when control comes from a place of fear and restlessness or one of self-love and discipline. A tarot spread can’t fill a void that requires patience. So I’ve decided to practice just that. I will allow myself to experience life as it comes, revel in the moments as they occur, and trust that somewhere along the way, it’ll all feel like it came together exactly as intended.