Several years ago, I found myself newly single and begging my friends to join me for a week of rest and relaxation. “Sorry, can’t take the time off,” one said. Others were bogged down with family matters.

But the breakup had taken its toll and I didn’t want to just stay at home. So I channelled my inner Greta Garbo and looked into going on holiday alone. Some friends thought I was brave, others thought it a madcap idea. My sister was worried for my safety and told me I’d have to WhatsApp her every night. But then an older male friend advised, “Just go for it, you only live once.” I thought, why not? 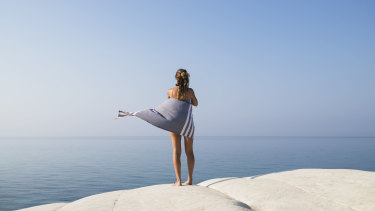 “I had space to think about my future and by the time I flew home, my head was clear. Despite a challenging start, I’d loved my “solo-moon”.”Credit:Stocksy

I scoured travel websites for inspiration. I didn’t fancy a package holiday to Spain, where I’d probably be surrounded by couples. Nor one of those “cycle until you’re saddle-sore and totally fed up” active holiday. Other places were ruled out for safety reasons. In the end I settled on Sicily, as I speak the language and love the food. I booked 10 days at a plush hotel overlooking the Ionian Sea.

On the first night, as I sat eating spaghetti alle vongole in a picturesque seaside restaurant, the waiter asked if anyone was joining me. “No, it’s just me,” I muttered, the words sticking in my throat. A pretty young woman at the next table with her friends, all 20-somethings, threw me a pitying stare. At 46, I must have looked like Shirley Valentine with my posh frock and new hairdo, and suddenly I felt incredibly self-conscious.

I’m normally the life and soul of the party – as a freelance journalist living in London, people are my thing – but I suddenly felt shy.

Determined to make the best of it, I filled the rest of the trip with fun activities: I trawled a supermarket for local delicacies, found a cafe that sold delicious croissants, where I spent the mornings lounging with an espresso. In the afternoons I went walking in the hills and olive groves. I had space to think about my future and by the time I flew home, my head was clear. Despite a challenging start, I’d loved my “solo-moon”.

Since then, my lone travels have become more adventurous – a safari in Kenya, dancing the night away in Monte Carlo, midnight trawling with fishermen in Italy. And I’m not the only one embracing it.

Take Suzy, a 39-year-old advertising executive. She was single and desperate for a holiday but most of her friends were married or having babies, so she booked a luxury all-female safari. “Flying to a camp in the Maasai Mara in a small plane with a mishmash of other women, all screeching and laughing as we spotted giraffes and wildebeest, is a memory I hold to this day,” says Suzy.

When female-focused travel company AdventureWomen started in 1982, the typical client was in her 40s, but today many are in their 50s or early 60s. “The majority are or have been married, and many have kids,” says co-owner Nicole Wineland-Thomson. “They see their children jetting off for adventures in Vietnam and think, ‘Hang on a minute, it’s my turn.’ ”

Jacinta, 48, a married mother of three, recently went hiking in Portugal without her family, after feeling bogged down by domestic responsibilities. “Don’t get me wrong, I love my family, but I found I could tap into bits of me that had lain dormant while I had been looking after everyone else,” she says. “I was standing up to my ankles in cow dung when I realised that I hadn’t felt this alive in decades.”

The travel industry has cottoned on and there are now companies that cater to everyone from solo adventurers to adrenalin junkies. The downside to travelling alone has long been the hefty single-person rate on double rooms, but now even cruise operators are offering solo studio cabins.

Safety is also a concern. Janice Waugh, the founder of Solo Traveler, an American website offering help and advice to women holidaying alone, recommends selecting the destination carefully before booking – and arriving in daylight. She adds, “Whatever you do, don’t tell strangers where you are staying.”

Loneliness is another consideration for those travelling alone, but there are now scores of friendship apps, including SoloTraveller, which connects female travellers globally. Bumble, the dating app, also has a platform called BFF to help find new friends.

Of course, a solo holiday isn’t all sunsets and self-fulfilment. Julie, a 57-year-old freelance producer, joined a walking holiday in Croatia and hated it. “Communal meals were a nightmare as I didn’t gel with any of the group.” So, yes, travelling in a group can require some adjustments. For her next trip, Julie is going on a spa holiday – completely solo.

Ultimately, though, the perks outweigh the downsides. If I want to flop on a sun lounger all day, I can. I can leave wet bikinis on the floor without my companion tutting. I can go to bed early without worrying about being a holiday bore. And if I do fancy a smoothie and a chinwag, I can find a holiday friend on an app. No only does it feed the soul but it is conflict- –and compromise-free. Now, anyone for a 10-kilometre trek?

This article appears in Sunday Life magazine within the Sun-Herald and the Sunday Age on sale December 15.

I can't keep an erection – is my anxiety the problem?