Amazon UK has removed a pair of shoes that were advertised using the N-word.

The listing was posted by Florence Shakespeare, a company thought to be based in China, and included the description ‘colour: N-word brown’.

The post was slammed by Labour MP David Lammy, of London, who came across the offensive term while browsing for shoes to buy last night.

He tweeted: ‘ Just buying brown brogues tonight leads to this racist micro aggression. Is it 2020 or 1720? Please Amazon take it down.’ 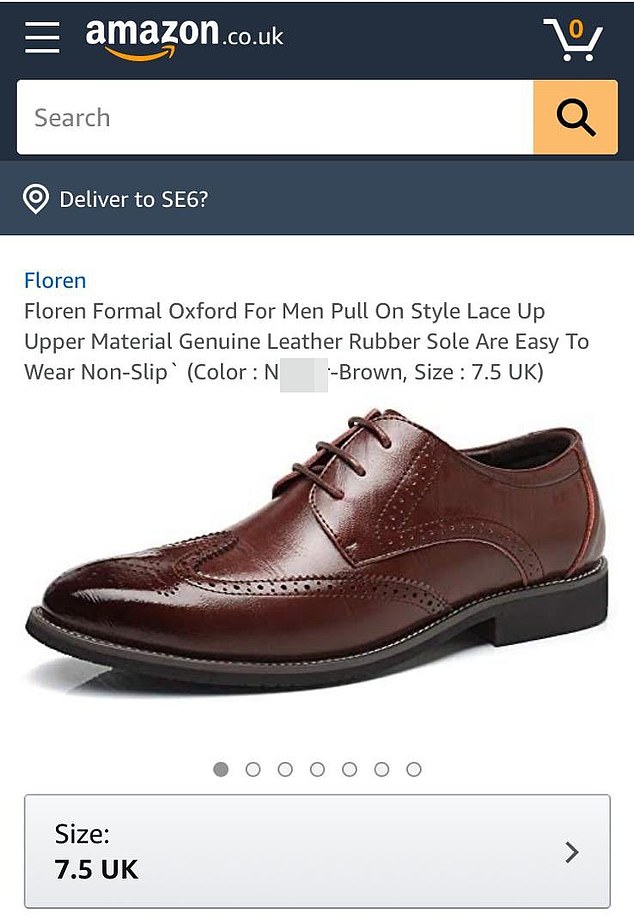 The listing was posted by Florence Shakespeare, a company thought to be based in China, and included the N-word in the colour description, pictured

The post was slammed by Labour MP David Lammy, of London, who came across the offensive term while browsing for shoes to buy last night

The tweet has since been retweeted more than 4,000 times and liked 14,700 times – as supporters raged at the ‘unforgivable’ advert.

After being made aware of the product, Amazon immediately removed it from sale.

Twitter user Aboud Dandachi added to the criticism, saying: ‘Absolutely appalling. Amazon knows exactly every trick in the book to get us to buy things, but they cant spot words like this? Unbelievable.’

Sarah Fearon said: ‘It’s awful that words like that still appear in 2020. ‘I’m sorry you had to be confronted by that and also by the horrible racists on this platform. There is still a long way to go sadly before equality becomes a reality and not a buzzword.’

Afroink said: ‘Absolutely unforgivable @amazon, should never ever happen, thanks @DavidLammy for calling them out. ‘This is beyond ridiculous. Why should we have to deal with crap like this everywhere we turn?!’ 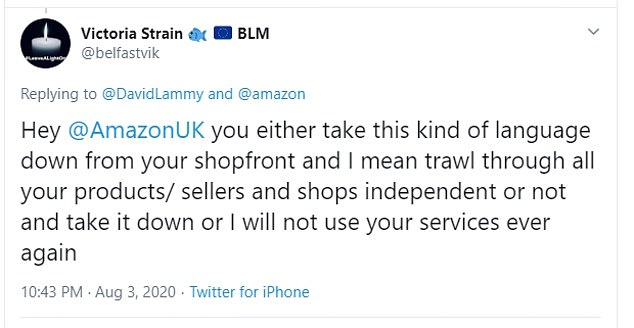 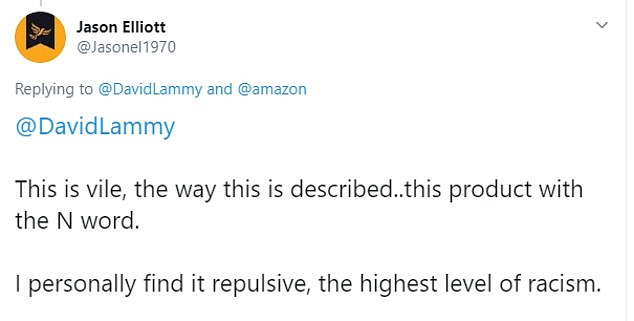 The tweet has since been retweeted more than 4,000 times and liked 14,700 times – as supporters raged at the ‘unforgivable’ advert

In response to complaints, Amazon confirmed the product was ‘no longer available’.

This is not the first time Amazon UK has been accused of allowing racist products to be listed on its website.

In May, Amazon was forced to remove an offensive Agatha Christie book called ‘Ten Little N-word Boys’ from sale for the second time – four years after they had initially been made aware of the issue.

An Amazon spokesperson said: ‘All sellers must follow our selling guidelines and those who do not will be subject to action, including the potential removal of their account. The product in question is no longer available.

Mr Lammy’s post came in the midst of the Tottenham MP’s criticism of the social platform, which he accused of failing to tackle racist abuse.

Mr Lammy had tweeted only an hour earlier to call on Twitter to be ‘faster at stamping out racist threats’ after receiving abuse online.

He had earlier posted a screenshot of an account named ‘Mikolaos Nichaloliakas’ calling him a ‘monkey boy’. The user also said the MP would ‘swing from a lamppost if you are not careful’.

Mr Lammy responded by saying ‘vile racists like you will not silence me,’ before calling on the Metropolitan Police to look into it and adding that ‘social media must not be a platform for threats and abuse’.

The MP retweeted the abusive message again 13 hours later, saying it had not been deleted and called on Twitter and its CEO Jack Dorsey to be ‘much faster’ at removing hate.

The Metropolitan Police confirmed it had received ‘an allegation of malicious communication’ adding: “The contents are being assessed.”

Home Secretary Priti Patel responded to Mr Lammy to say she had asked Metropolitan Police to keep her informed about the abuse he had received.

She wrote: ‘I am sorry you have faced this awful racist abuse @DavidLammy.

‘I have asked the @metpoliceuk to keep me updated on their investigation.

‘As I have said before, @Twitter must take decisive action against this sort of vile content much faster.’

A Twitter spokesman said: ‘We have policies in place that address abuse and harassment, violent threats, and hateful conduct.

‘If we identify accounts that violate any of these rules, we’ll take enforcement action.’

'Gilmore Girls': Money Was The Driving Force Behind Everything In the Series