The operator of a Manhattan gallery known for its expertise in ancient Asian artefacts has pleaded guilty to charges of conspiracy and possession of stolen property in connection with the trafficking of looted treasures from India and Southeast Asia – some of which were purchased by the National Gallery of Australia. 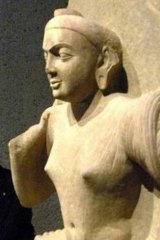 The Seated Buddha, sold to the NGA by Nancy Wiener in 2007, was among the works that were found to be stolen. Credit:

Some of the items she sold to museums and others were sold on the auction block at Christie’s and Sotheby’s, according to investigators. The items ranged in value from $US100,000 to $1.5 million ($137,000 to $2 million).

The dealer, Nancy Wiener, 66, whose mother had also been a well-known expert in the field, acknowledged Thursday that she had taken possession of items that showed possible signs of looting, such as dirt and debris encrustation, and presented them for sale with false statements of provenance.

“For decades I conducted business in a market where buying and selling antiquities with vague or even no provenance was the norm,” Wiener said during her appearance in Manhattan Supreme Court. “Obfuscation and silence were accepted responses to questions concerning the source from which an object had been obtained. In short, it was a conspiracy of the willing.”

Wiener, whose gallery was named for her, has paid $1.2 million in forfeitures and fines, according to officials of the Manhattan District Attorney’s Office, which handled the case.

Wiener had also cooperated since her arrest in 2016 in the surrender or recovery of some two-dozen pieces of ancient sculpture and statuary, many representing Buddhist and Hindu deities, officials said.

Assistant District Attorney Matthew Bogdanos, who leads a unit that prosecutes illegal trafficking in antiquities, said Wiener “can’t undo decades” of harm to nations like India and Cambodia, which were deprived or denuded of objects of major cultural significance. But he commended her for cooperating with authorities and surrendering files and documents showing a pattern of illicit trade that stretched back decades.

Wiener’s mother, Doris Wiener, is credited with jump-starting the American market in South Asian antiquities in the 1980s. She died in 2011.

“It is an understatement to say that those records have proven to be a treasure trove of investigative value to us,” said Bogdanos.

Some of the illicit items Nancy Wiener was charged with possessing included Indian antiquities smuggled into the US by Subhash Kapoor, who is jailed in India and accused of trafficking in thousands of looted items, according to court records. Some of those items, including bronze and stone sculptures, a painted scroll and photographs, were acquired by the NGA between 1989 and 2009.

Other items were obtained through Douglas A.J. Latchford, a prominent collector of Cambodian antiquities who died last year after he was indicted by federal officials on charges he sold looted items on the international art market.

Leila A. Amineddoleh, who practices and teaches art and cultural heritage law in New York, said Wiener’s statement “reveals a great deal about the antiquities market.”

“This is an amazing document because art crime analysts discuss the common practice of fabricating provenances, and so it’s helpful that Wiener went on record about doing this and provided detailed information about objects that went to major museums and auction houses,” she said. 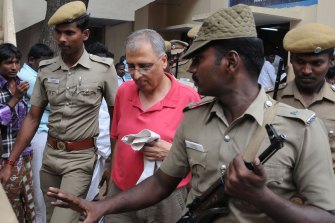 Art dealer Subhash Kapoor is brought into court in India in 2012.

Wiener described in detail how in 2012 she consigned numerous objects from her mother’s estate for sale through Christie’s. Though the items had been acquired from “known dealers of illegally exported antiquities” from Afghanistan and Pakistan, Wiener said at her sentencing that for six of the objects she had knowingly provided Christie’s with false provenances that said her mother had acquired them from a private collector.

“These false provenances were meant to facilitate the sale of these objects by obscuring the fact of their illegal export,” she said.

Clinton Howell, a New York-based antiques dealer and president of the Art and Antique Dealers League of America, said the tactics used by Wiener and others in past years “are not pardonable.” But he added that “the dealer of today is not the dealer of 40 years ago – there’s a very different attitude now.”

This article originally appeared in The New York Times.