I was a tragically pony-mad child. I can still recall the decade of birthday lists headed by the single word "Pony"; the long car drives during which I imagined the putative pony and I jumping every obstacle we passed; the endless re-readings of my favourite pony novel, by English equine-adventure-book machine Josephine Pullein-Thompson. "The worst thing in the world is to have unhorsey parents," begins Prince Among Ponies (tragically, I still remember whole pages of it by heart). "Patrick, my elder brother, says that is a sweeping statement, but I think it is a great truth." 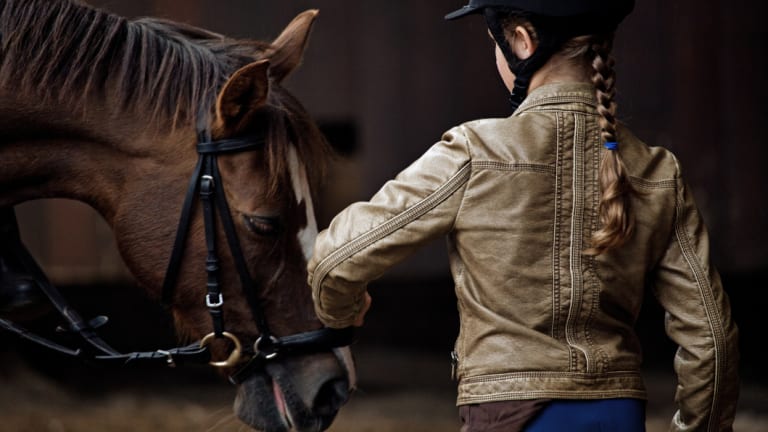 I can still recall the decade of birthday lists headed by the single word “Pony”.Credit:Getty Images

My poor parents were not unhorsey. But neither were they millionaires, so there was nothing they could do about those birthday lists. They tried their best, paying for riding lessons all through school and tolerating International Velvet being played on a continuous VHS loop. But they could never afford to buy me a pony. And later, due to my inexplicable failure to become a merchant banker, neither could I. So eventually I gave up riding, and in most ways forgot all about it for 20 years.

Then I had a child, and now she is six, and lo and behold, she is learning to ride. Was it her idea? Who can remember? And more importantly, what does it matter? That is completely beside the point. The point is that every time I take her into the dim warmth of the stables and smell that lovely smell and look into those dark, reflective eyes and stroke those velvet noses, some small thwarted part of me expands.

The potential psychological implications of all this never occurred to me until I mentioned it in the office the other day. Isn't this what having a kid is about, after all: offloading onto someone else's innocent shoulders all your own wild youthful yearnings, desperate bitterness and profound sense of cosmic injustice? Yes, yes, a thousand times yes, said my colleagues at work, leaning forward in their chairs and clasping their hands and recounting all the things they'd longed for in vain – movies! Barbies! Vegemite sandwiches! Tickets to the footy grand final! – and the way they'd grabbed every one of those childhood chimeras by the throat for their own kids.

"I even buy Gold Class!"

"Both my girls got their own Barbie!"

"He can have vegemite! Honey! JAM!"

I know exactly how these parents feel. But surprisingly, some felt exactly the reverse.

"My mum made me do tap and ballet and drama and acting. So my kids do nothing!"

"My mother cooked rich creamy gourmet food! So my kid gets steamed vegies!"

Even more bewildering, a third group had actually had their ravening desires met as children.

But were their own kids spared as a consequence? Not remotely. "My daughter was totally over ballet. But I made her keep going. I loved ballet!"

Or, even more startling: "Winning. As a child, I always loved winning. Still do. So I like my kids to win. Yep."

All of which makes me wonder if it's ever possible to escape your past. Or your parents, for that matter. My poor kid had never heard of ponies until I told her; never ridden one until I took her. And now – entirely of my own accord – I have created a monster. "Why can't I have another one tomorrow?" she asks after each fortnightly lesson. Then she adds, with the air of someone who's just discovered the simple solution to a complex problem: "I know! You can just buy me my own pony!"

Of course, I can no more buy her a pony than my parents could buy me one. In the absence of a lottery win by some member of her immediate family, all I have done is set her up for a lifetime of yearning and disappointment.

Clearly, not every parent does this to their children. But, with apologies to that great poet of parents, Philip Larkin, it seems like we all do something. Somehow we f… them up, we mums and dads. We may not mean to, but we do. Man hands on misery to man – and mum to daughter, too.

To read more from Good Weekend magazine, visit our page at The Sydney Morning Herald, The Age and Brisbane Times.

'Black Widow' killer says looking back at her crimes is 'surreal'