Australians could be able to travel to select Asian and Pacific destinations without facing lengthy stints in quarantine by August, as the Morrison government looks to open the border to more countries after establishing a safe travel zone with New Zealand.

Immigration and health authorities are exploring plans to open up to Singapore within months, followed by other nations with low COVID numbers such as Fiji, Vietnam and Thailand, as well as Japan and South Korea, although their daily case numbers are higher. 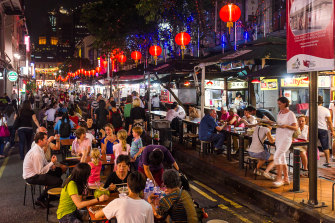 Singapore holidays could be on the cards if Australia can provide “tamper-proof” vaccination certificates.

Prime Minister Scott Morrison and New Zealand Prime Minister Jacinda Ardern announced on Tuesday that a trans-Tasman travel bubble between the two countries will be established in less than two weeks. From 11.59pm April 18 Wellington time (9.59pm AEST), Australians will be able to fly into New Zealand with no quarantine for the first time in more than a year.

The opening up of the travel bubble will complete the other side of a one-way travel bubble which was agreed to by both countries in October. Since October 16, New Zealanders have been able to travel to some Australian states without needing to quarantine in Australia, but they have still had to quarantine for a fortnight when they arrive back in New Zealand.

Mr Morrison said New Zealand’s decision to start two-way travel was “an important first step”, and that it was “tremendous” that the borders would be open before Anzac Day.

“This is the first of many more steps to come, I believe, as we get back to a more normal position, not only over the course of this year but beyond,” he said. 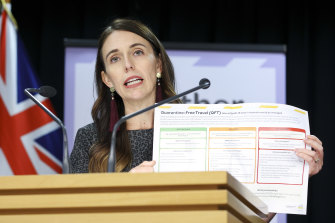 Asked which countries Australia could next open up to, Mr Morrison said “we have looked at places like Singapore and Japan and South Korea and countries like this, but at this stage we are not in a position to move forward on any of those”.

Multiple senior government sources confirmed Singapore would be the next priority for the government, but conceded Australia’s rate of vaccinations may be an issue as Singapore has indicated it will require “vaccination certificates” to resume quarantine-free travel.

“We are exploring with several countries and regions, including Australia, on the mutual recognition of vaccination certificates. The certificates can be physical or digital, and we will need them to be secure, tamper-proof and verifiable,” he said.

“However, vaccinations are only one aspect of pandemic control. Social distancing, contact tracing, quarantine and testing are also very important aspects which countries and regions have used to control the spread of COVID-19 virus even as vaccines become available.” 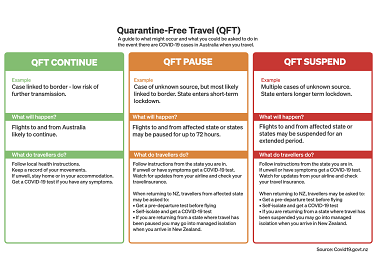 Flights would likely continue uninterrupted if a quarantine hotel worker case was diagnosed and contained quickly and all cases were linked, Ms Ardern said.

However, if there was a short lockdown in a state following a mystery case, such as the recent Brisbane outbreak, flights could be halted for up to 72 hours.

The NZ government would only suspend flights for more than 72 hours if there were multiple cases of unknown origin, Ms Ardern said.

Mr Morrison said he had a standing request that states and territories take proportionate responses to any future outbreaks in New Zealand, but any state border closures or controls were a matter for the state governments.

“From time to time, steps might have to be taken to protect both countries if there is a sizeable outbreak. I think that is just assumed as part of how we all live with COVID-19,” he said.

“We will continue to follow what I would call a proportionate response and I would encourage states to follow the same process. Increasingly, that is what we’re seeing this year.”

Unearthed footage of Diana and Adrian competing on Millionaire

From Waitrose to Marks and Spencer, supermarket Christmas sandwiches which are bad for your elf