Australia could approve a COVID-19 vaccine almost two months ahead of schedule, the head of the medical regulator says, after the UK on Wednesday became the first Western country to approve a vaccine.

The Morrison government also confirmed people will have full access to their own vaccination records but other companies would not be able to access it, in order to protect people's privacy. 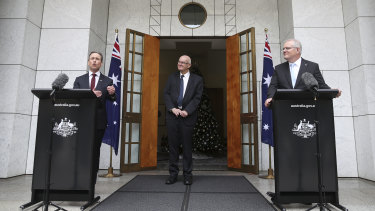 The UK is expected to begin vaccinating vulnerable people as soon as next week after giving emergency approval to a COVID-19 vaccination on Wednesday.

Health Minister Greg Hunt said Australia was "ahead of schedule" on its five-stage vaccination rollout.

"We are on track for decisions on the early vaccines by the end of January," he said on Thursday morning, adding that subject to approvals the country could then start vaccinating health workers in March.

The Pfizer vaccine approved in the UK is one of four COVID-19 vaccine purchasing agreements Australia has made, but so far no company has provided complete data because trials were still ongoing, head of the Therapeutic Goods Administration Professor John Skerritt said.

"We are still hopeful that if we receive a full submission in a week or two, by January or the beginning of February, well ahead of the March date that the government has set, we will be in a position to approve one or more [vaccines]," he said.

Prime Minister Scott Morrison said while there was an "understandable urgency" to getting the community immunised, he trusted the process of the TGA.

"I have great confidence in the Therapeutic Goods Administration to be able to critically assess those [vaccines] and to advise the minister and I, and the premiers and chief ministers about the safety of those vaccines," he said.

Opposition health spokesman Chris Bowen welcomed news of an earlier approval, but said the government was late to secure an agreement for the Pfizer vaccine.

"So there'll be a lag between January and March when the rollout starts," he said. "Our own timeline for returning to normality could have been made quicker if the government acted earlier."

On Thursday the government tabled the Australian Immunisation Register amendment, which would make it compulsory for doctors to record if patients had received a COVID-19 vaccine.

Minister Hunt said there was "no prospect" of that vaccination data going directly from government to airlines or other companies that request it.

"What we're doing is making sure that everybody will have full access to their own data. Only those people have access," he said. "It's a matter of individual control of individual records."

Royal Australian College of General Practitioners spokeswoman Associate Professor Charlotte Hespe said data from the register is uploaded to My Health Record, which patients can access through their own MyGov accounts.

"This information is also available via the Medicare application and anyone can download an immunisation statement via Medicare Online, which includes a report of a patient's immunisation history," she said.

"It is up to patients to decide what works best for them and GPs can assist with any queries."

Online sex parties are booming but are they here to stay?