The Labor senator also said it was not a matter of fixing the country’s relationship with China, but about taking a “different stance” towards the region. 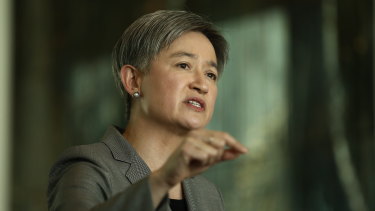 “The relationship is obviously in a very difficult and challenging place. Going forward, I think we should assume that a more assertive, at times more aggressive China, is here to stay,” she said on ABC’s Insiders on Sunday.

Senator Wong pointed out that China’s direction has not changed overnight. President Xi Jinping has been in power since 2013, and China has become much more assertive over that time, she said.

“We are the country that is most economically dependent on China,” she said.

“The government really does need to stop focusing on splashy headlines and work out, what is it doing? How is it helping our exporters, how is it helping those who have become more dependent on China for Australian jobs, what is the strategy?”

Rather than thinking about how to fix the relationship, the senator said we need a strategy on diversifying economically and on working with other countries in the region.

“We do have to work with our exporters to diversify our markets, to enable them to make sure we have more diversified opportunities instead of what has happened, which is a greater reliance on China,” Senator Wong said.

On Monday final amendments to the government’s Foreign Relations Bill were expected to be passed in Parliament with Labor's support. The new law will give the federal government sweeping powers to veto any agreements states, territories, local governments or universities make with foreign powers if they contradict Australia’s national interest.

“I think [the federal government] should try and resolve this in a way that respects engagement with the state government and that recognises you know that China will observe how this is handled carefully,” she said.

“I don't think it's been good to have the Prime Minister, and others, engaging in a public argument about this.”

On a potential boycott of China’s 2022 Winter Olympics, Senator Wong said the event would be an opportunity to focus on the country and human rights.

“I think that the Olympics, rather than boycotting, should be used as an opportunity to highlight our concerns about a range of issues, including human rights,” she said.