Australian planes and a naval supply ship are being loaded with medical and engineering equipment for the battered Pacific island nation of Tonga, but it may take until Thursday to clear the airport for landing after a volcano blanketed the ground in thick ash.

There are three reported deaths, with two locals and a UK national losing their lives in the tsunami that inundated the Tongan capital Nuku’alofa after the undersea Hunga Tonga Hunga Ha’apai volcano erupted on Saturday. 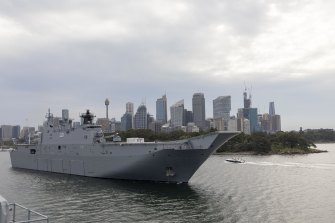 HMAS Adelaide on its way to Brisbane to be loaded with emergency supplies to take to Tonga.Credit:Defence media

Communications are still largely cut off due to the damaged undersea cable, which is expected to take weeks to repair.

Reconnaissance flights and satellite images have revealed significant damage to coastal infrastructure from a tsunami following the volcano blast and a two centimetre layer of ash.

Foreign Minister Marise Payne said Australia and New Zealand would work together to respond to the “absolutely devastating event”. She expects to receive detailed advice from the Tongan government soon, following their Cabinet meeting, which will guide aid efforts.

“We’re expecting them to set out their specific requests today,” Ms Payne said on Tuesday. Australia has committed an initial $1 million in funding for Tonga, with more available as disaster response progresses.

“Our High Commissioner, Rachael Moore, has had a very good meeting today with the Tongan Prime Minister, and he is very grateful for Australia’s assistance and assistance also of New Zealand.”

Australian C130 Hercules aircraft will leave the Amberley air base south of Brisbane, once they are cleared to land in Tonga. Australia’s HMAS Adelaide is also being loaded in Brisbane with medical and engineering equipment, as well as personnel. It will take five days to travel to Tonga.

HMAS Adelaide is a gunship that can operate in shallower waters. Ms Payne said it would act as a base for Australian helicopters that will service populations on outer islands, which are expected to have sustained significant damage.

The ash plume has polluted the water supply, which in Tonga is drawn from rainfall. Immediate aid efforts will focus on bottled water and water purification tablets, breathing masks due to the ash-laden air, shelter, clean-up equipment and fuel supply.

Telstra is sending on-ground satellite equipment to link Tonga with communications satellites. The lack of connection means aid agencies have not been able to receive reports from their staff on the ground.

Australian Red Cross is today sending emergency relief supplies despite the lack of communication with Tonga, with a particular focus on COVID protocols due to the nation’s infection-free status.

“Right now, our focus is to send supplies that we believe will bolster the Tonga Red Cross disaster response. This includes equipment to help ensure citizens have access to safe drinking water, materials to repair shelters, and mosquito nets to protect communities from the spread of dengue in Tonga,” said head of humanitarian programs Adrian Prouse.

“We know that violence against women tends to increase in the aftermath of a disaster, so there will need to be services in place to prevent and respond to this. It’s also essential that access to health services isn’t interrupted, including maternal and reproductive health,” she said.

Minister for International Development and the Pacific Zed Seselja said Australia’s planes and ship would be loaded up with items necessary for the recovery.

“What we understand is water, food, fuel and clean up equipment and obviously, telecommunications equipment,” he told 2GB.

“Those aircraft at Amberley are being loaded up as we speak with those type of things. And obviously, they’ll go as soon as possible and then for larger loads, we’ll be looking to the HMAS Adelaide in the next few days, which can obviously take significantly more equipment.

Greggs to reopen 800 branches from mid-June

Golfer Shoots And Kills Dog For Stealing His Ball: Police