The lawyer for a British greeting card company trying to stop Banksy from trademarking two of his most famous artworks in Australia says the anonymous street artist is acting in bad faith by “trying to backdoor” the country’s copyright laws.

Joel Masterson, from Brunswick legal firm By George Legal, said the legal stoush could end up being taught in law schools around Australia as a precedent that shows street artists can’t protect their work from being copied if they don’t want to reveal their identity – or perhaps, even if they do. 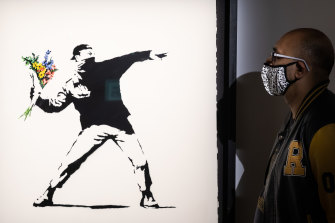 He maintained the company was doing nothing wrong – not even breaching copyright – by taking photos of Banksy street art and licensing them for sale around the world for merchandise with no proceeds returning to the artist.

Full Colour Black has lodged official opposition to two proposed Banksy trademarks: Love is In the Air, also known as Flower Bomber or Flower Thrower, his stencil of a masked man throwing a bouquet of flowers as if it were a rock in a riot and Girl with Balloon, a symbol of lost innocence that made headlines when a painting was partially shredded at Sotheby’s auction house.

Banksy’s London-based company Pest Control Office Ltd applied for trademarks on the two images in July 2019, and they were accepted at the end of April 2021. However, Full Colour Black lodged its opposition in late June just before the trademarks could be registered.

The fight will now be arbitrated by IP Australia, which oversees Australian trademarks, and could be appealed to the Federal Court.

Mr Masterson said he was brought on board By Full Colour Black last September. They are yet to finalise their legal position, but he anticipated they would pursue a “bad faith” argument to have the trademark rejected, similar to tactics that brought them victory in an EU court this year.

“We’ll be making the argument that they never had any intention to use this trademark as a trademark or a form of branding,” he said. “What they’re really trying to do is backdoor the Copyright Act. That’ s not what the trademark register is for.”

If Banksy wanted to apply copyright to his works then he would have to identify himself, Mr Masterson said, and prove he created the work in question.

Banksy had once written that copyright was “for losers”. Mr Masterson said it was actually “for winners” but only if you did the legwork to prove it.

“We live in a free market economy and as part of that copying is encouraged. Copyright is an exception to that rule. Of course, the problem for graffiti artists is that if they identify themselves they might face criminal prosecution so they’re in a bit of a bind. But that’s their problem.

“If everyone could assert copyright anonymously the whole copyright system would become very loose, and people would be flinging unwarranted demands around willy nilly.”

Mr Masterson said the trademark was “not distinctive” because the artist’s work has been copied and reproduced so much.

“It’s become such a jumble,” he said. “There have been multiple third party traders, all over the world… the horse is bolted.”

Full Colour Black considers Australia a “good potential market” for its products, he said, so they wanted to protect themselves legally from a potential Banksy trademark.

Several artworks have already been trademarked in Australia, including Andy Warhol’s famous banana which was registered in 2012 by the Andy Warhol Foundation.

And back in 1995, the foundation which administers the rights to the work of American pop and street art pioneer Keith Haring trademarked several of his most recognisable images in Australia, including his “heart with rays”, “crawling figure” and “rectangular dog”.

Mr Masterson said he had been unaware of these examples, but they “might have slipped through to the keeper, accepted by IP Australia because no-one opposed it because no-one was interested”.

He said the Banksy case could end up being taught in law schools because it was the “esoteric stuff at the margins” that got academics interested.

Pest Control Office did not respond to a request for comment, and its Australian lawyer said he “can’t comment on the matter”.