BBC Breakfast viewers blasted a doctor for coughing into her hands before reaching for hand sanitiser during a segment today about keeping the spread of viruses at bay with good hygiene.

But just before she reached for the bottle of hand sanitiser, the British GP coughed into her hand – which didn’t escape the notice of eagle-eyed viewers.

Many expressed concern as Dr Rosemary proceeded to press down on the pump after ‘contaminating’ it with her germs. 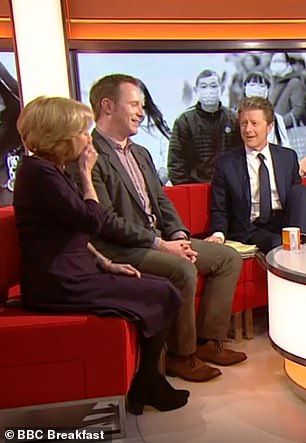 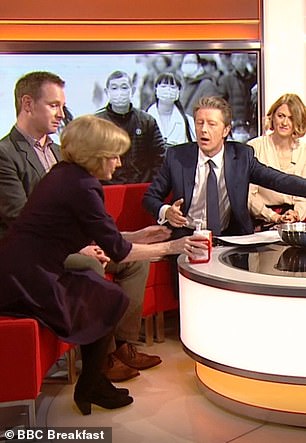 One wrote on Facebook: ‘She coughed into her hands, touched the hand sanitiser, then proceeded to clean her hands. Bit late the virus would now be on the sanitiser.’

Another tweeted: ‘GP speaking about preventing spread of #coronavirusuk Just coughed into her hands and rubbed them together. If the presenter of #BBCBreakfast hadn’t noticed she’d wouldn’t had washed her hands! No hope. We’re all doomed.’

Prior to her demonstration, Dr Rosemary told how good hand hygiene is the most important thing do in terms of stopping the transmission of the killer coronavirus.

Rachel then asked Dr Rosemary if she was going to teach Charlie how to wash his hands, as the GP coughed into her hand. 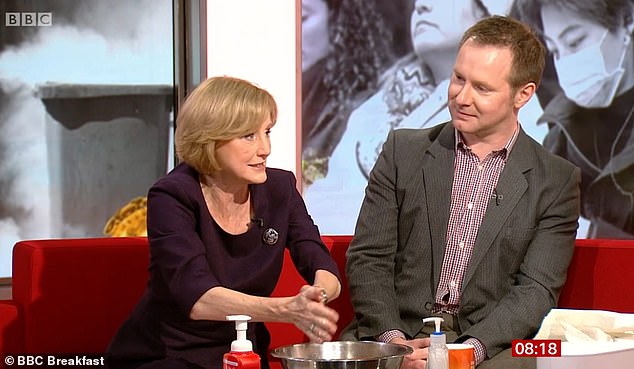 Prior to her demonstration, Dr Rosemary, pictured beside a fellow guest, told how good hand hygiene is the most important thing do in terms of stopping the transmission of the killer coronavirus

One viewer said Dr Rosemary ‘should know better’, urging her not to cough into her hand because it’s not an effective way of halting infection unless you thoroughly disinfect your hands afterwards

Charlie joked: ‘Hold on a second, you just coughed, so the correct procedure, should you now use one of these?’ before handing her a tissue.

Dr Rosemary insisted it was a tickle and she’d put her hand over her mouth before grabbing the hand sanitiser bottle without wiping her hands first.

2. Rub hands palm-to-palm before placing the right over the left and interlacing the fingers.

3. Repeat the process with the left hand over the right.

4. Rub the palms together with the fingers interlaced.

5. Rub the backs of the fingers against the opposing palms as well as covering the thumb in the sanitiser.

6. Wait for the hands to dry, at which point they are ‘safe

Charlie then pushed the bowl of soapy water towards Dr Rosemary who went on to demonstrate the best way to wash your hands.

Outraged viewers took to social media to express their concern that the GP had spread her virus to the bottle of hand sanitiser.

One wrote: ‘Whole nation now yelling that the doctor grabbed the body of the sanitiser bottle before she washed her hands…’.

Another tweeted: ‘So Charlie just picked up virus off sanitiser that doctor touched.’

And one asked: ‘Did anyone notice she touched the sanitiser before cleaning her hands after coughing?’

One viewer said Dr Rosemary ‘should know better’, urging her not to cough into her hand because it’s not an effective way of halting infection unless you thoroughly disinfect your hands afterwards.

Health campaigners recommend those with the sniffles should stem outbursts with either a tissue or the crook of their elbow.

Two more cases of the killer coronavirus have been confirmed in the UK today, both of them travellers who caught the virus in Europe – including one who is believed to have returned from a hotel in Tenerife where 160 Britons are quarantined.

Millions of us spend our days slaving over a keyboard. But lurking between the keys, hidden on the mouse and nestled in your phone lies more than 10 million bacteria – 400 times more than on the average toilet seat.

Unhygienic working conditions are a ‘key contributor’ to the 131 million working days lost each year in the UK and millions more around the world, to illnesses including colds and flu.

Bacteria and viruses can multiply on hard surfaces, remaining infectious for up to 24 hours, hygiene expert and visiting professor at the University of Salford, Dr Lisa Ackerley told MailOnline.

She said the average desk is a prime breeding ground for infections, before urging people to disinfect their desks, telephones, keyboards and computer mice.

She added that better cleaning and hygiene measures could result in ‘significantly fewer sick days’.

Now, a new infographic lays bare the stark reality of how important it is to detox your desk.

It shows one in five workers fail to clean their workspace before eating, while two in three eat lunch at their desk.

Twenty per cent of people never clean their computer mouse, while around 80 per cent of common infections are transmitted by touch.

A new infographic reveals the typical office worker comes into contact with 10 million bacteria at their desks each day, with the average keyboard harbouring 7,500 bacteria and 20 per cent of all workers never cleaning their computer mouse

The Truth About Priyanka Chopra and Meghan Markle’s Friendship

From sheets to pillows, here’s how I turned my bedroom into a hotel-like oasis