Billie Eilish made her ‘SNL’ hosting debut! The 19-year-old pulled double duty on the Dec. 11 episode and had the audience laughing-out-loud with this sketch.

Billie Eilish, 19, showed off her acting chops on Saturday Night Live! The “bad guy” singer hosted the Dec. 11 episode and showed her comedy skills off in a slew of sketches — including one with Heidi Gardner where they directed rehearsals for a hip-hop inspired musical. The show was set to be a dramatic shift from the old Christmas show for this group, as per Billie, that was “too Boomer — this year we’re switching it up.”

Heidi then explained that the ladies “took it upon ourselves to learn all of hip-hop.” An unconvinced Chris Redd appeared confused: “You learned all of hiphop?” he questioned, as Billie and Heidi got right into it. First move? The pimp walk. “Ya’ll are up here,” Billie began, motioning to her upper body. She then dropped her stance to demonstrate what she meant. “But hip hop is down here. The streets are in the knees,” she said, nearly cracking up. “Are they?” Chris pondered. 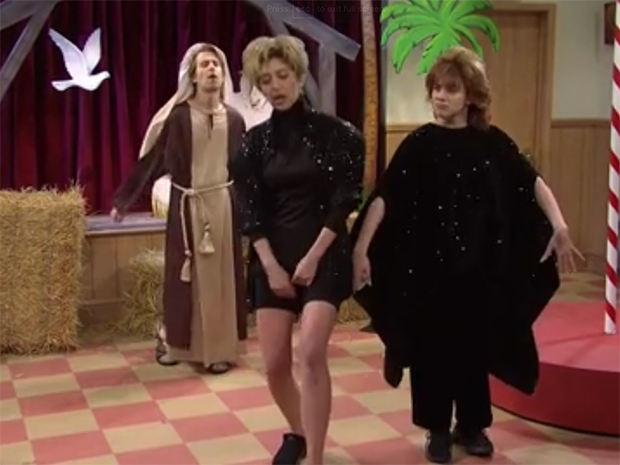 Next up? Twerking! “When you land I want booty booty… watch me pop my butt! Can everyone see my butt?” Billie asked the actors as she showed off her take on the move, wearing a black sequin t-shirt and ’80s inspired curls. “It’s a hip pop!” Heidi dramatically added, calling over an actor dressed as Jesus Christ. “Are you in your diaper? Honey, do you not have a butt? We gotta make you a butt quick? Listen baby Jesus can do anything,” Heidi said as she stuffed his behind. “Twerk son! Wow, he can actually twerk! Shake it like a rattle!” Billie hilariously added as he showed off his moves.

The California native was excited to share news of her double duty host and musical performance gig on Instagram several weeks ahead. Sharing a screenshot of SNL‘s post-it not image used to announce weekly talent, Billie wrote, “AHHHHHH!!! I’M HOSTING AND PERFORMING ON SNL!!! CRAAAAZY I COULD SCREAM!” She added, “@nbcsnl on december 11th!! see you then!!”

Kate McKinnon appeared in several promos with the GRAMMY winner ahead of the show, including one where she asked, “Don’t you have a birthday coming up?” Billie indeed does, as she turns 20 on Dec. 18. “20?! Wow! Okay, you’re so about to hear the big secret about the world that’s been passed down from generation to generation,” Kate shared. Billie, unwilling to wait, straight up asked if she could “hear it now” as Kate leaned over to whisper in her years.

Wile this is Billie’s first-ever hosting gig, she made her musical guest on the 45th season premiere back in 2019. Then just 17-years-old, the singer slayed with an epic performance of “bad guy” that had her literally walking on the ceiling. She reflected on the iconic live moment during a video shared to SNL‘s social media accounts ahead of the Dec. 11 episode, revealing how she and her creative team pulled off the visual stunt.

“Basically, it was inspired by a scene in Royal Wedding where Fred Astaire walks on the walls,” she explained. She also revealed she choreographed the entire thing using a tissue box, Russian dolls and her finger. “We had more rehearsal time then I’ve ever done. We did a bunch of run throughs of me walking down the side. The camera was attached to a moving room and was exactly in sync,” she also said.

Is This The Real Reason Trump Keeps Talking About A 2024 Presidential Run?