George Floyd, a 46-year-old African American man, died on Monday 25 May after Derek Chauvin, a white police officer, knelt on his neck for almost nine minutes. Chauvin has since been charged with third-degree murder and second-degree manslaughter. Floyd’s death has sparked a resurgence of the Black Lives Matter movement, with protests erupting across the globe.

Social media is filled with regular people and celebrities alike speaking up and demanding justice for Floyd and other black people.

Black workers are also paid up to 20 percent less than their white counterparts.

In the UK, a new report has also revealed black communities have been hit harder by the coronavirus pandemic.

The Public Health England report said black people are dying at up to four times the rate of their white counterparts.

Express.co.uk has compiled a list of anti-racism organisations and charities to donate to and reveals other ways you can support the movement financially. 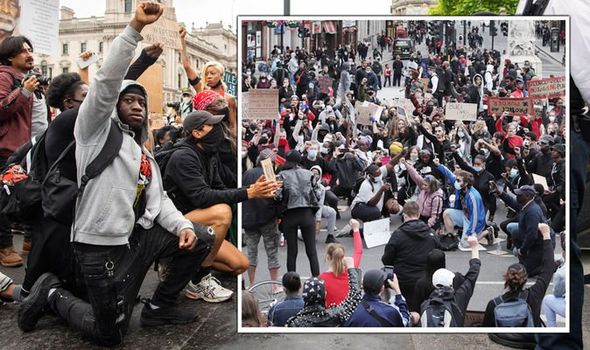 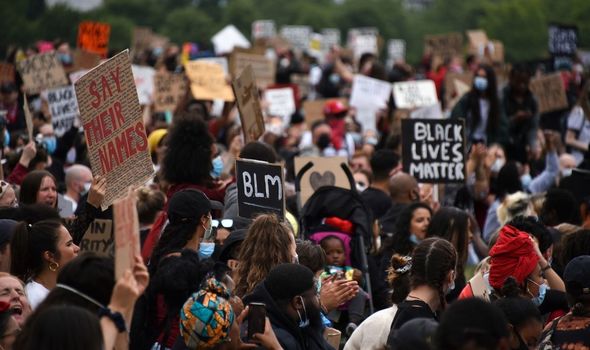 Their mission is to “eradicate white supremacy and build local power to intervene in violence inflicted on Black communities by the state and vigilantes”.

To stand by this belief and support the movement, you can donate via the GoFundMe page.

Donating will fund the following: 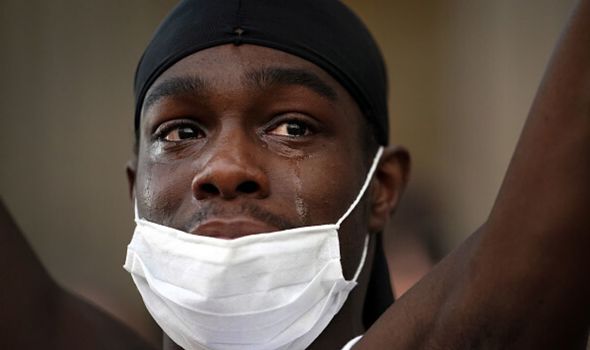 Black Minds Matter UK is a non-profit organisation that aims to empower communities to take charge of the change and improvement they want to see.

The organisation created a Go Fund me page two days ago in order to raise money to pay for therapy sessions for black people in the UK.

The site says: “We understand more than ever the effects of racial discrimination across this country, for many black people the cases of violence against individuals such as George Floyd in the USA and the many historic incidents in the UK are deeply triggering.

“Treating mental health must be a priority in the fight for equality and welfare of black people in the UK.

“We also understand that the NHS is currently in crisis and therapy is not always readily available.

“Our aim is to link as many black individuals and families in the UK with certified, professional, black practitioners for sessions as soon as possible.”

Philonise Floyd, George Floyd’s brother, has set up a Go Fund me page to raise money for Floyd’s funeral and burial expenses.

It will also cover mental and grief counselling for the family, and lodging and travel for the court proceedings.

A portion of the funds will go to the Estate of George Floyd, meaning Floyd’s children will be taken care of financially, and their education will be subsidised.

You can donate here, or find the details you need to send a cheque here.

Stand Up To Racism

Stand Up To Racism is an anti-racism campaign group who asked Brits to #TakeTheKnee on their doorsteps on Wednesday, June 3 at 6pm.

The idea is to show your solidarity with George Floyd and the BLM movement.

You can subscribe to support the campaign monthly, or make a one off donation here.

By donating you can provide the group with a regular income, allowing them to plan ahead for the year.

Financial support could pay for resources, leaflets, placards, and stages at demonstrations.

The Southall Black Sisters is a not-for-profit human rights group in the UK.

Founded by a group of black and minority women in the UK in 1979, the Southall Black Sisters aims to provided a safe environment for women trapped in abusive relationships or at risk of violence and abuse.

This applies especially to abused black and minority women, who are one of the most marginalised groups in our society.

To support their work, you can donate monthly or pay a single amount here. 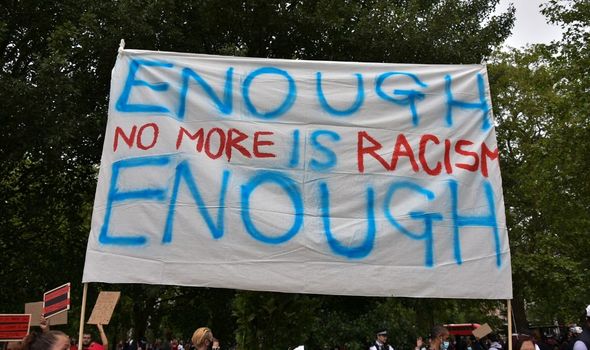 Since it is independent, it relies on donations to survive.

If you would like to support Runnymede’s work tackling racism in the UK, donate here.

Click ‘Donate to a Charity’, and type in Runnymede’s Charity Number 1063609 in the search box.

The full amount you donate will reach the charity.

Kick It Out is an English football’s equality and inclusion organisation.

The organisation works throughout the football, education and community sectors to challenge racism.

Kick It Out is fighting for inclusive practises and an end to discrimination for everyone who plays, watches, or works in football.

Donate to the cause here.

Stephen Lawrence was murdered in an unprovoked racial attack in April 1993.

The Stephen Lawrence Charitable Trust aims to be a fitting legacy to Stephen’s memory and to make a real impact by:

Continuing to campaign for fairness and justice, ensuring the lessons learnt from Stephen’s murder are acted upon

You can donate here.

If you can spare £25, you are funding the training of a volunteer in safeguarding and working with young people.

They put on an annual celebration during pride month, as well as a variety of activities throughout the year. The events take place in and around the UK.

They promote and advocate for the spiritual, emotional, and intellectual health and wellbeing of the communities they represent.

Donate to the cause here.

Exactly 100 percent of all donations go towards organising the UK Black Pride events throughout the year.

She was working at Victoria station when she was spat at by a man claiming to have coronavirus.

While police inquiries have concluded that her death was not linked to the attack, the fundraiser will ensure Mujinga’s family will be supported.

You can donate here.

The Black Curriculum is a social enterprise founded in 2019 by young people with the aim of incorporating Black British history into the UK Curriculum.

At present, British children are not taught about Black British History consistently as part of the curriculum.

The Macpherson Report, which was produced 20 years ago, showed that that cultural diversity within the curriculum is one of the ways to prevent racism. So why hasn’t it been changed?

The Windrush Review recommended that colonial and migration history should be taught, but it isn’t widely taught.

The group seeks to provide a sense of belong and identity to young people across the UK, and to teach an accessible educational Black British history curriculum that raises attainment for young people.

If you want to help ‘remedy a wider systemic issue’ and educate Brits on Black British history, you can donate here.

The money will go to developing packages of support for teachers and buy books around black history for young people.

A donation of a larger amount, like £50 or £100, will go towards materials and supporting freelancers who are teaching the syllabus.

It will also support teacher-training, and the creation of new materials for young people.

How to financially support Black Lives Matter with no money

Being short on cash is no excuse not to support the BLM movement.

You can financially help the movement with no money at all.

By continuously streaming this video on Youtube, you are helping the cause.

The video caption explains: “This video project was created to offer people a way to donate and financially contribute to #blacklivesmatter without having any actual money or going out to protest themselves.

“Investing in our future can be difficult for young people, so 100% of the advertisement revenue this video makes through AdSense will be donated to the associations that offer protester bail funds, help pay for family funerals, and advocacy listed in the beginning of the video.

“PLEASE share this video, make sure to leave the ads running, repeat the video, and let people know about this easy way to help.”

Demi Lovato Is Signing Off of Social Media

You Can Buy Oreo & Chips Ahoy Cakes For One At Walmart