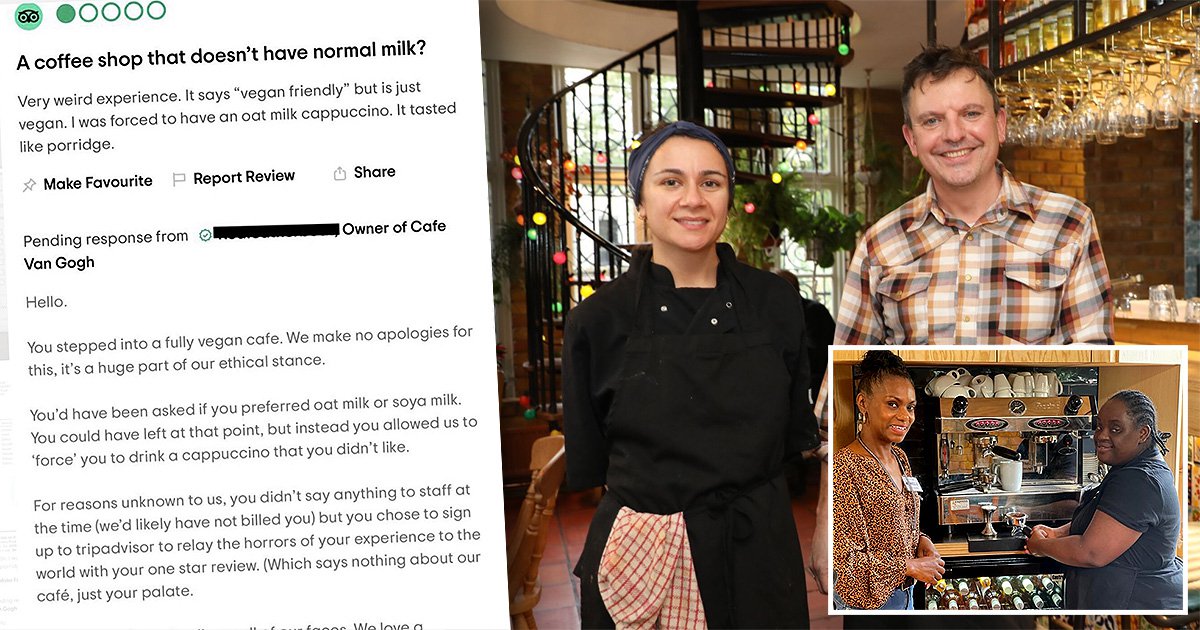 Either you’re a diehard oat milk devotee, or you prefer your cream from other means (whether almonds or cows).

One customer at Café Van Gogh, a 100% vegan restaurant in Brixton, clearly fell into the latter camp.

After visiting the establishment, they left a – since-deleted – one-star review, accusing the cafe of ‘forcing’ them to drink oat milk.

‘It says “vegan friendly” but is just vegan.

‘I was forced to have an oat milk cappuccino. It tasted like porridge.’

Rather than just sitting back and accepting the usual anti-vegan vibes, Steve Clarke, 47, who runs the non-profit business with head chef and co-owner Bonita de Silva, decided to fire back.

Steve accused the anonymous customer of ‘vegan baiting’, then called them a ‘poor sausage’ (one made of tempeh, we’d imagine).

Steve replied: ‘You stepped into a fully vegan cafe. We make no apologies for this, it’s a huge part of our ethical stance.

‘You’d have been asked if you preferred oat milk or soya milk. You could have left at that point, but instead you allowed us to “force” you to drink a cappuccino that you didn’t like.

‘For reasons unknown to us, you didn’t say anything to staff at the time (we’d likely not have billed you) but you chose to sign up to Tripadvisor to relay the horrors of your experience to the world with your one-star review. (Which says nothing about our café, just your palate.)

‘You’ve put a broad smile on all of our faces. We love a keyboard warrior, and we hope we didn’t hurt you when we forced that coffee down your brass neck.’

The cafe is a non-profit social enterprise that trains and employs adults with learning disabilities, and ‘runs on kindness’ – operating a pay-it-forward scheme where customers can buy coffee for those who can’t afford it.

Steve reckons that the reviewer was having a bad day, and notes that while he wouldn’t normally respond, he was a bit fed up of these kind of messages.

‘Poor sausage,’ he said. ‘I think it was just vegan baiting. I think the guy came in, a bit of a keyboard warrior, and didn’t say anything to any of the team about his dissatisfaction.

‘We don’t know who it was, it’s just quite disappointing. We try to run on kindness.

“My response to the review wasn’t as kind as it could have been, I’m aware, but it did my head in.

‘We’re a non-profit social enterprise, some of our team have learning disabilities, we work really hard to try and get things right.

‘We tend to do really well with our reviews, and I prefer if people give personal feedback.

‘We’re not vegan evangelists, this is how we run our business, we try to stick to really high ethical standards and I don’t think that we could honestly do that and serve anything but plant milk.

‘But we’re not anarchists, we’re not radicals, we’re not trying to change people’s minds about things. People come with their own expectations and that’s fine too.’

While some other one-star reviews popped up in the deleted one’s place, overall, Steve’s response seems to have won some potential customers over – so it’s all worked out in the end, oat milk and all.

Steve added: “I don’t want a customer to leave disappointed. So you know if he had the balls on the bottle to say “Oh, I’m not dead keen on this”, he wouldn’t have been charged.

‘I’m not going to jump on the bandwagon of saying you weren’t forced to have oat milk, but cows are forced.

‘It would take a lot for me to try and damage somebody’s credentials with a one-star review.’

Mechanic transforms a rusty old Volkswagen into a retro vehicle