From humble homes to massive mansions: Viral TikTok video reveals where stars such as Rihanna lived before they found fame

A viral TikTok video is highlighting the incredible difference between the homes celebrities lived in before and after they found fame.

The upgrades made by the starlets are remarkable, from swapping modest homes to enormous modern mansions with stunning pools and even a private airport.

The video has since racked up more than 1.3 million views, as she looked the former properties of Eminem, Rihanna, Beyoncé, Ariana Grande and John Travolta. 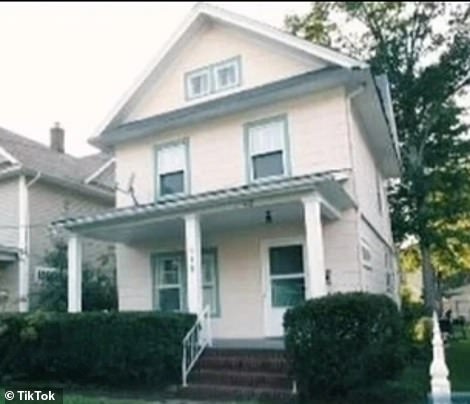 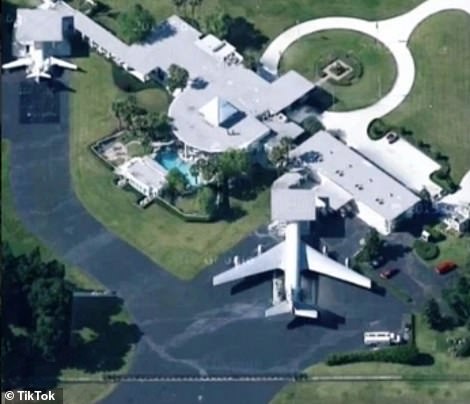 A viral TikTok video shared by user @CatherineTheGreat is highlighting the incredible difference between the homes celebrities lived in before and after they found fame (pictured, John Travolta’s home in New Jersey (left), and his current mansion (right) 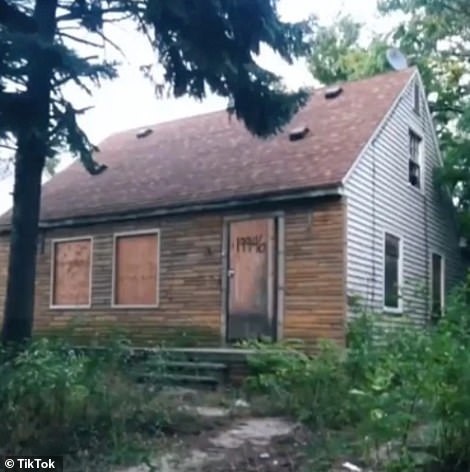 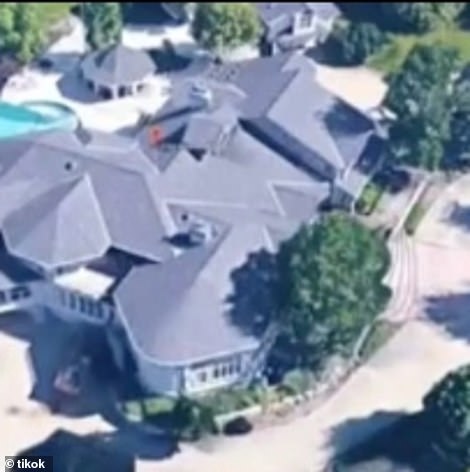 One of the most incredible transformations from childhood home to adult mansion comes from Eminem, who swapped his one-bathroom Detroit house (left) for a mega-home in Rochester Hills, which he sold in 2017 (right) 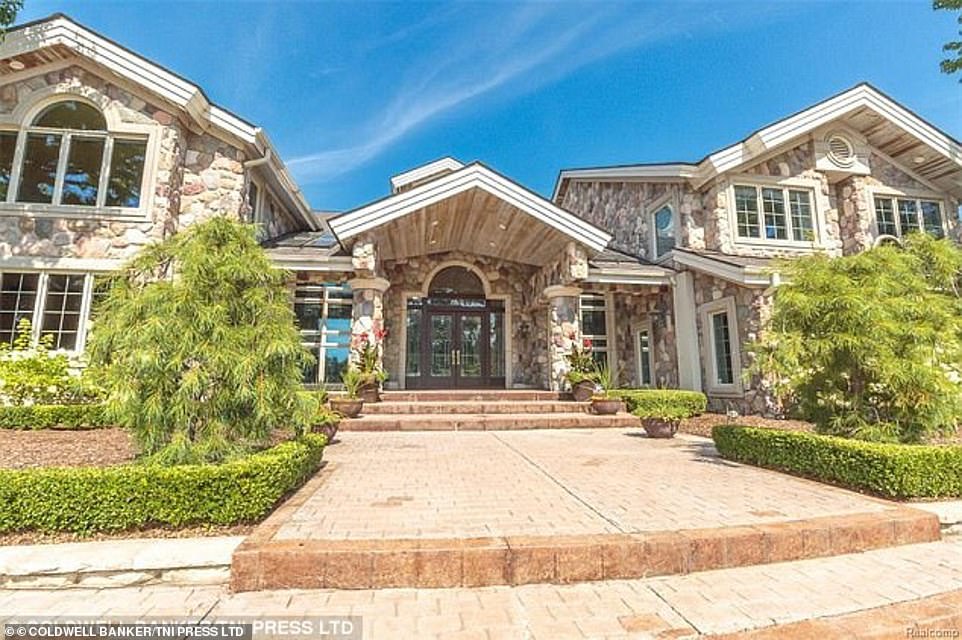 The 44-year-old rapper put the six-acre home up for sale for $1.9million several years ago – despite originally buying it for $4.8million 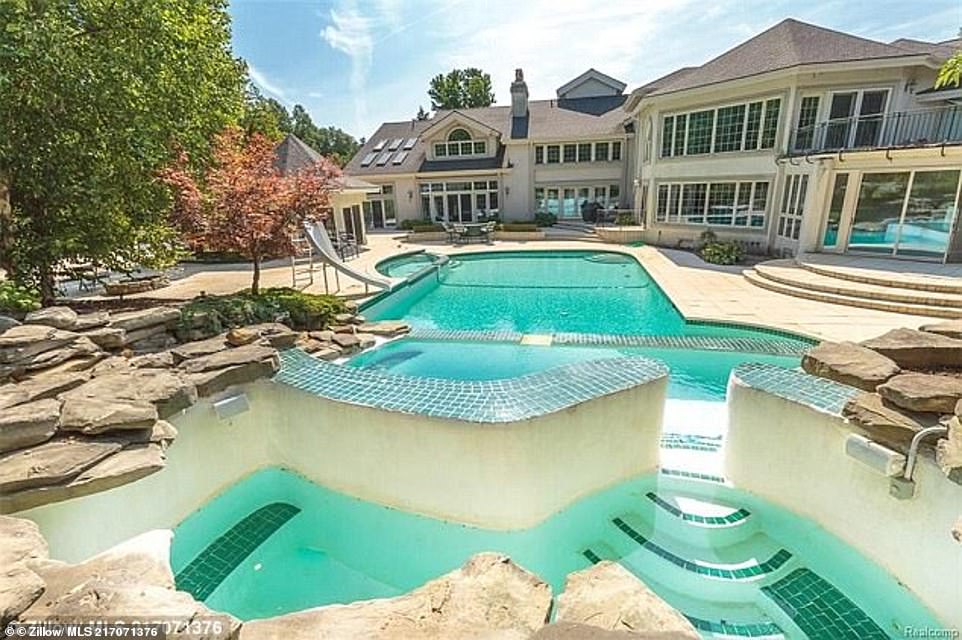 Impressive: The Cleaning Out My Closet hitmaker’s stunning five-bedroom property boasted a waterfall pool with a twisting slide and spa and an ‘entertainment cabana’ 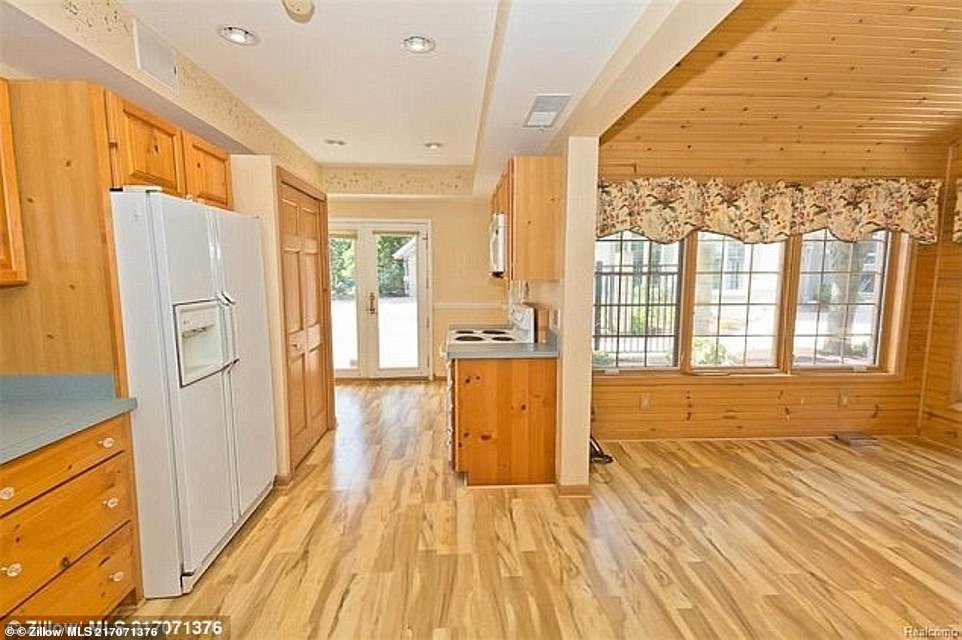 Sprawling: Other highlights of the home built in 1986 include two-story, 1,500-square-foot entertainment room, eight bathrooms and a three-car garage

Singer Rihanna’s transformation is one of the most striking, after the singer and designer swapped her small bungalow with a huge $6.8 million mansion in Los Angeles, which boasts six bedrooms and eight bathrooms over 7,130sq ft.

The singer who has been spending less time at the jaw-dropping Los Angeles three-storey property after revealing she has been living in London for a couple of years is now keen on showing the abode some TLC by leasing it.

The new residents will certainly get a taste for the Barbadian’s taste for luxury with its six bedrooms and eight bathrooms over a spacious 7,130 square feet of living space.

Meanwhile another of the most striking differences was that of Eminem, who traded a humble one-bathroom home in Detroit for a 15,129 square foot mansion he bought in Rochester Hills, with the 5.7 acre estate boasting six bedrooms, nine bathrooms, a tennis court, lake, pool and a five-car garage. 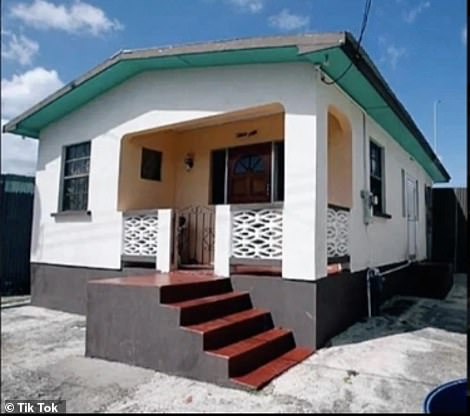 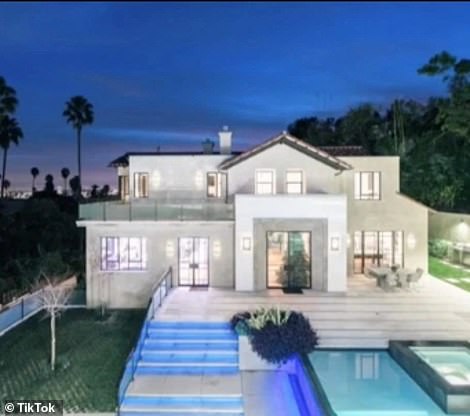 Singer Rihanna’s transformation is one of the most striking, after the singer and designer swapped her small bungalow (left) with a huge $6.8 million mansion in Los Angeles, which boasts six bedrooms and eight bathrooms over 7,130sq ft (right) 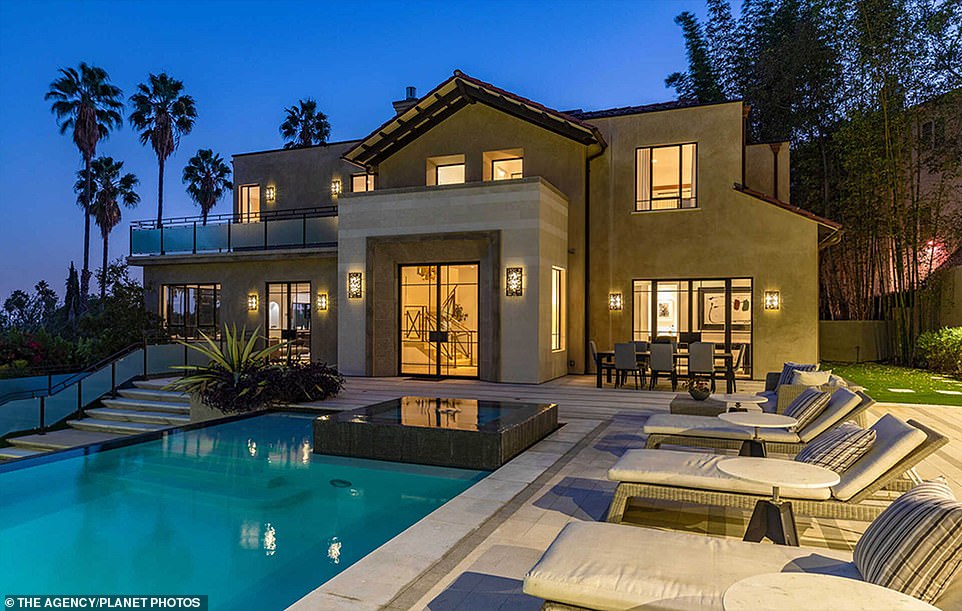 Last year Rihanna rented out her incredible Los Angeles mansion for a staggering $35,000 per month after failing to sell it for $7.5million 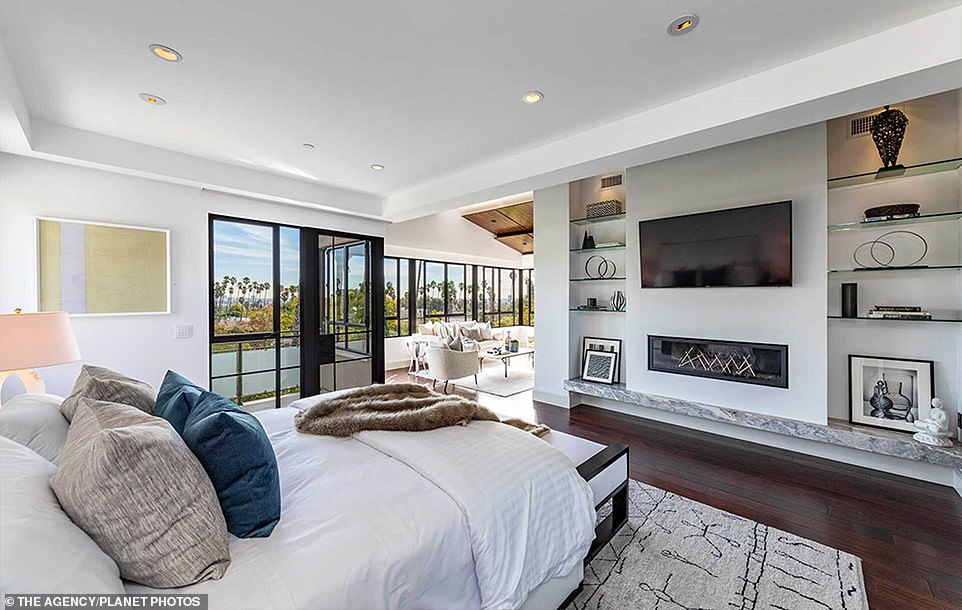 The Barbadian had a taste for luxury on show in its six bedrooms and eight bathrooms over a spacious 7,130 square feet of living space 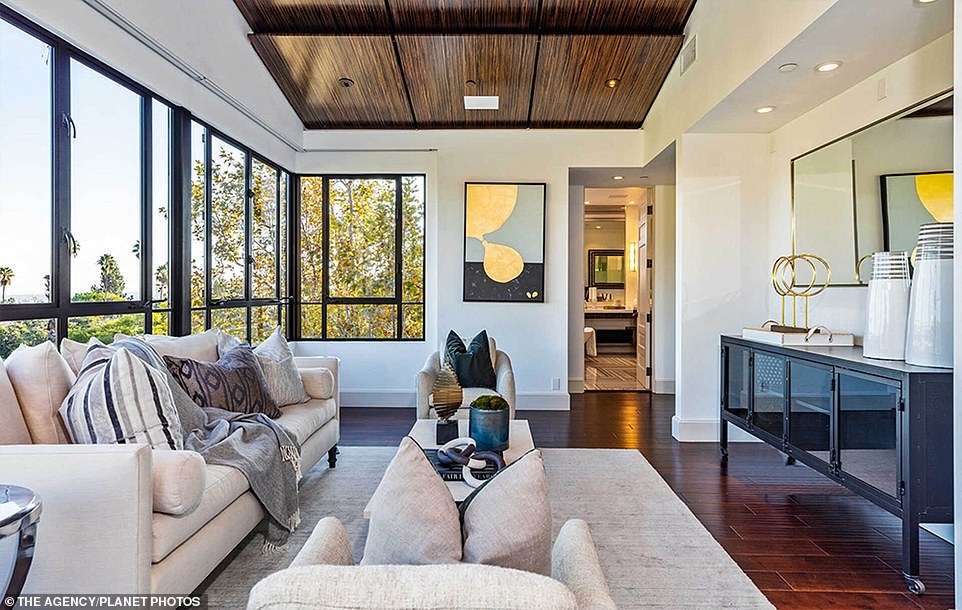 Stylish: Rihanna has shown off her flair for interiors with a neutral white colour scheme throughout, complete with floor to ceiling windows 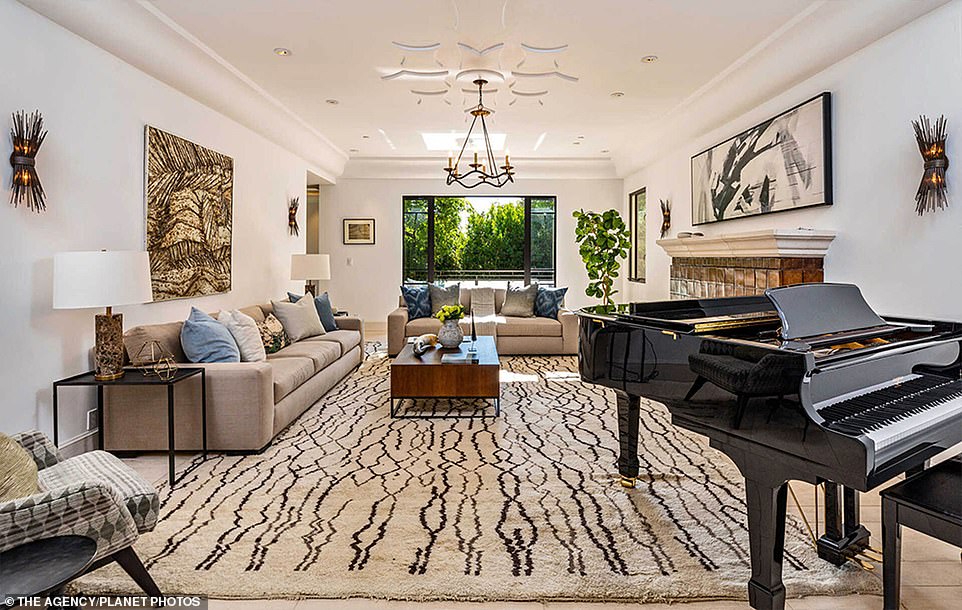 Chic: The living room definitely appears to be a place for the songstress to unwind after a long day at work, with a luxurious rug, plush couches, a fireplace, as well as a piano to entertain any of her musical needs

The house, which has now become part of hip-hop history, was even featured on the cover of 2000’s Marshall Mathers LP.

Back in 2010, Eminem talked to Spin about how he’s visited his old home on Dresden Street as it’s changed over the years, and said: ‘It may sound corny, but I’ll go by and try to remember how things were when I was in those houses.

‘I’ll go back and remember, like, f***, man, how life was back then. How much of a struggle it was. As time goes by, you might get content and forget things.’

Meanwhile Grease star John Travolta spent his childhood in New Jersey, with snaps from a property listing claiming to be his former home showing a modest two-storey house with three bedrooms and two bathrooms. 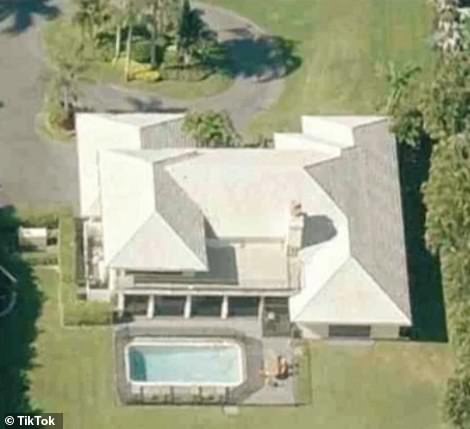 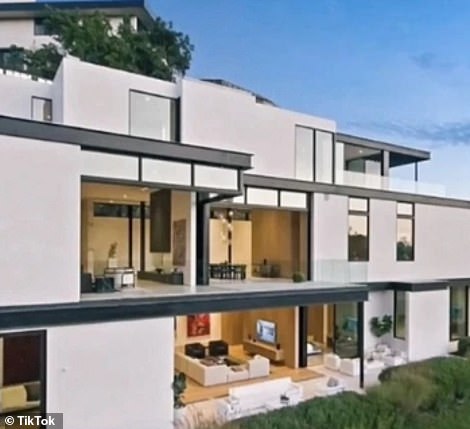 A before and after fame comparison was also shared for Singer Ariana Grande, whose childhood home boasted a pool (left) 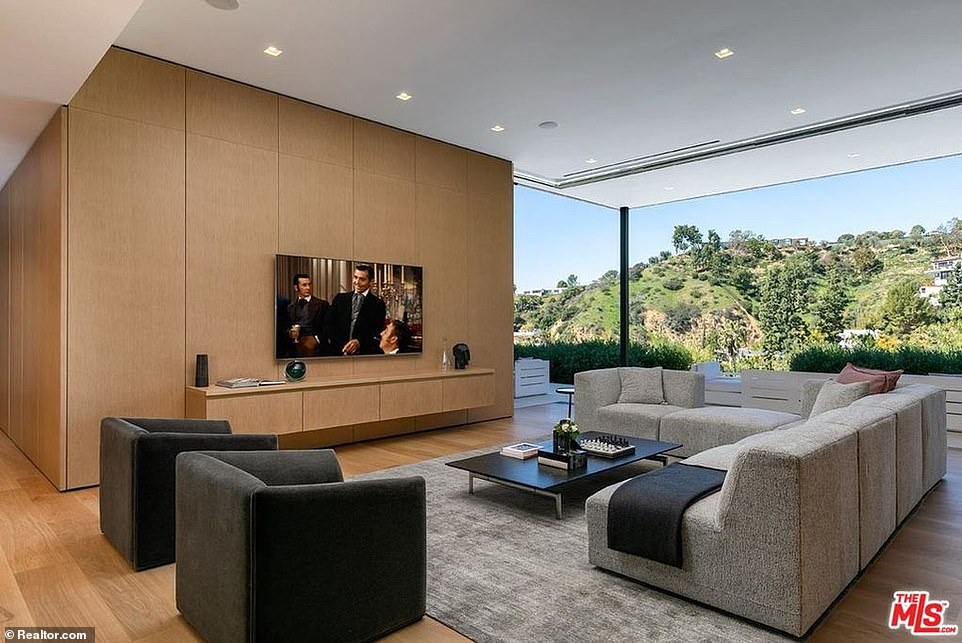 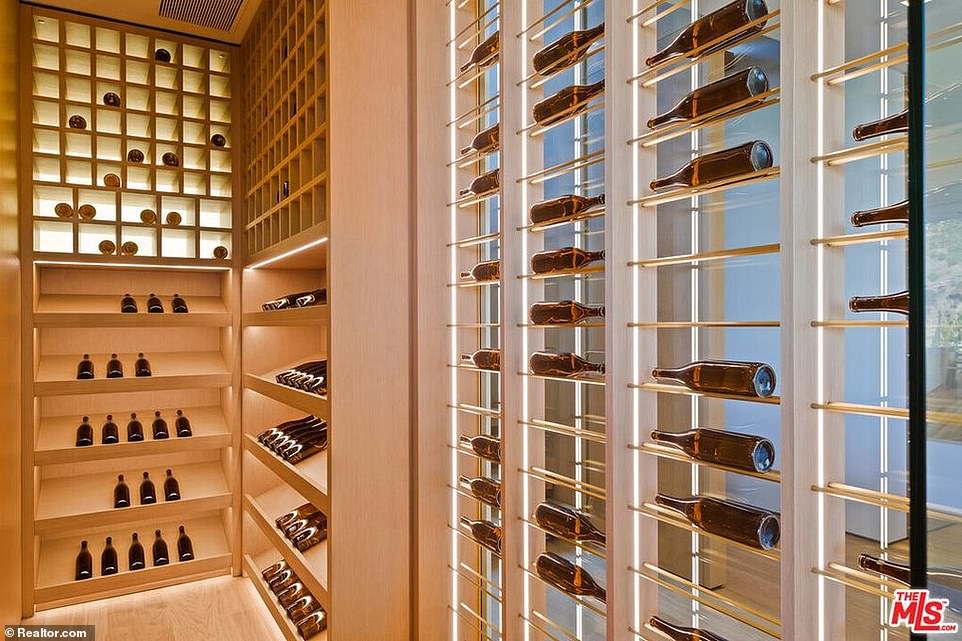 Wine o’clock! It also boasts a wellness room, a 300 bottle wine cellar and a fitness studio 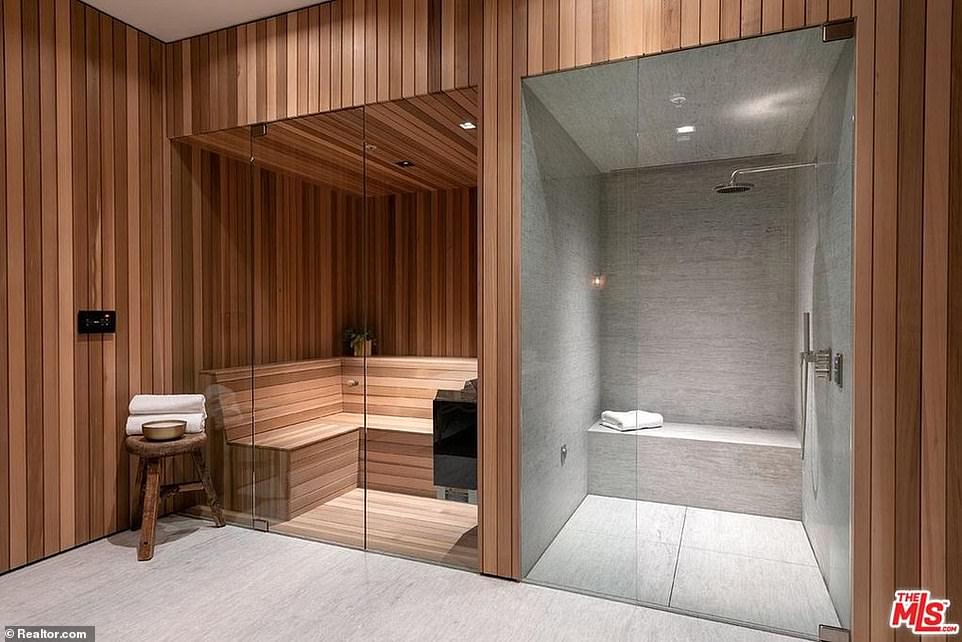 Be well: Seen here is the property’s cedar-lined wellness center 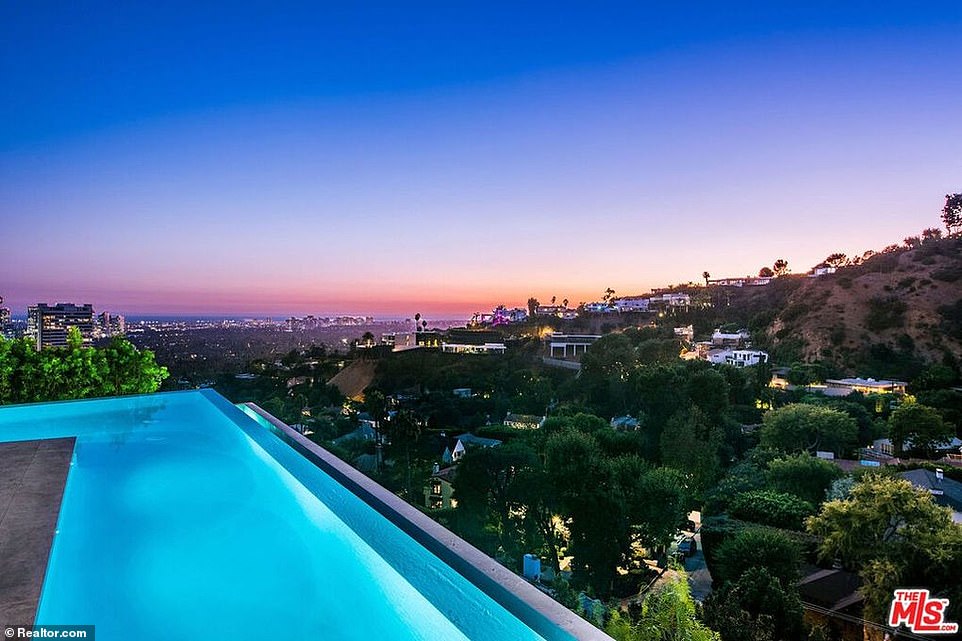 To infinity and beyond: Seen here is the view from the home’s infinity-edge swimming pool out back

He now lives in an airport he has built in Florida which features two runways for his collection of private jets.

Singer Ariana Grande grew up in a five-bedroom mansion in Florida, which also has a stunning outdoors pool.

Despite her childhood home being seriously impressive, the star has traded the property for a Hollywood Hills home in 2017.

While the home only has four bedrooms, it also boasts a fitness studio, 300-bottle wine cellar and an infinity pool. 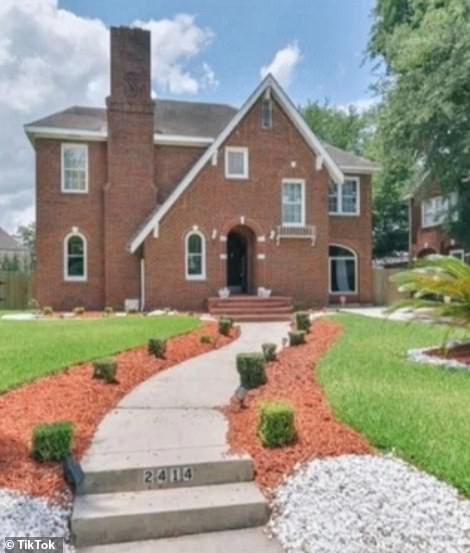 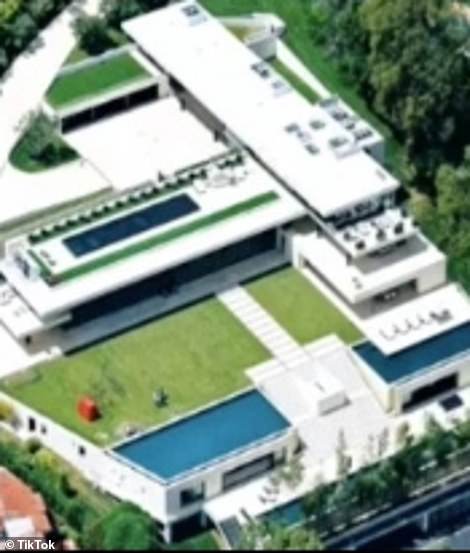 Meanwhile Beyoncé’s old home in Houston was also featured in the video, with the music mogul swapping the quaint three-bedroom property for a mega mansion.

She bought a $81 million mansion with eight bedrooms and a home cinema in Bel Air with Jay Z in 2017. 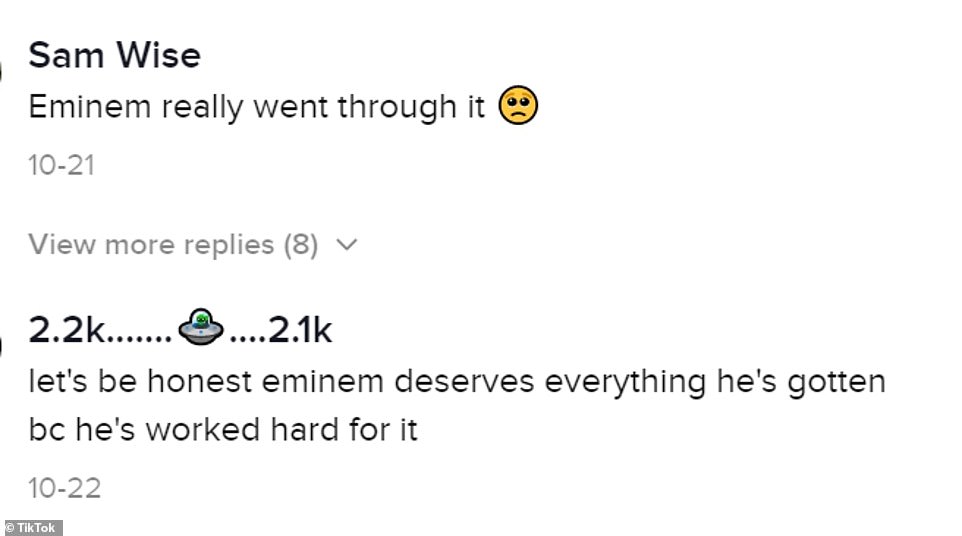 The TikTok video quickly went viral, with many viewers commenting that they hoped to ‘strive’ like the celebrities in order to transform their lives

Many users were stunned by the transformations shared in the video, with one commenting: ‘Who else strives to be like this someday?’

Another wrote: ‘John Travolta casually has a plane in front of his house, no biggie.’

A third added: ‘Let’s be honest, Eminem deserves everything he’s gotten because he’s worked hard for it.’

The Beginner's Guide to Talking Dirty in Bed

Yankees’ verdict on Gary Sanchez will tell us everything