A Victorian company is facing dozens of charges over allegations it illegally stockpiled and handled hazardous chemicals at warehouses across Melbourne.

Melbourne-based firm Bradbury Industrial Services is accused of stockpiling the waste at Campbellfield and Craigieburn warehouses in March last year. 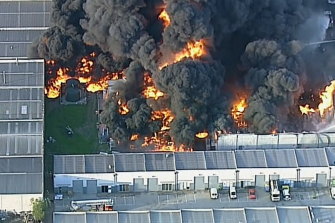 The toxic blaze in Campbellfield in April last year.Credit:Nine News

A fire at the company's Campbellfield chemical recycling facility burned for days in April last year, spreading plumes of toxic smoke across the northern suburbs, which forced residents indoors, and schools and businesses to be closed. Several workers were injured from burns and chemical exposure.

Bradbury Industrial Services has been charged by WorkCover with 28 charges relating to the warehouses, according to court documents released on Friday.

Seven charges relate to the Campbellfield property and another 21 were listed for the property at Craigieburn.

A hand-up brief for the charges must be provided next month, if not earlier, and the next court date will be in June.

Bradbury Industrial Services and its director, Paul Anthony Bristow, have separately been charged by the Environment Protection Authority over the work practices that allegedly sparked the fire.