Shoppers have emerged from one of the worst economic hits in Australian history by celebrating with a spending spree for new clothes and restaurant meals in a further sign the worst of the pandemic recession is behind the country.

Retail sales jumped by 4.9 per cent in October with NSW and the ACT leading the revival, the Australian Bureau of Statistics reported. This follows a 1.3 per cent increase the month before. But the re-opening of major cities was too late to stop a major hit to the national economy in the September quarter. 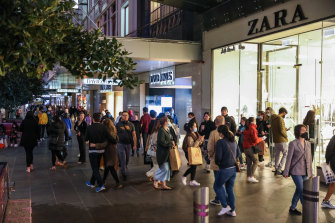 Shoppers emerged out of lockdown ready to spend with the rest of the year likely to see retail spending elevated. Credit:Getty

Clothing, footwear and accessory retail sales were up 28 per cent in October and cafes, restaurants and takeaway sales were up 12 per cent. Department store turnover jumped 22 per cent. Household goods increased 4.5 per cent.

Retail sales fell in July and August as large swathes of the country faced coronavirus restrictions to limit the spread of the Delta variant, but in October there was a 20 per cent jump in turnover at shops in the ACT and a 13 per cent increase in NSW, followed by a 3 per cent rise in Victoria. The NSW lockdown ended on October 11.

The only category to experience a fall in turnover was food retailing, down 0.5 per cent, reflecting a shift back to eating out after lockdown rather than buying products for home cooking.

While there are clear signs of the economy’s recovery since the end of lockdowns in NSW, the ACT and Victoria, the financial hit of those lockdowns will become apparent on Wednesday with the release of the September quarter national accounts.

NAB chief economist Alan Oster said the economy may have contracted by 3.8 per cent in the quarter. That would make it the second-worst quarter on record, only surpassed by the 7 per cent hit delivered in the June quarter last year when the entire economy was shut down to stop the spread of COVID-19.

Mr Oster said total retail trade fell by 4.4 per cent through the quarter with even larger hits likely in household services.

“While the GDP release will provide confirmation of the depth of the impact of lockdowns, these data are dated. Higher frequency data suggests a strong rebound in activity is under way,” he said.

NAB is tipping the current December quarter to show economic growth of 3 per cent.

The head of Australian economics at the Commonwealth Bank, Gareth Aird, forecasts the September quarter to show a 3.5 per cent hit to the economy.

He said there would be a massive fall in household consumption, largely based out of NSW and Victoria, while business investment, public spending and inventories were also likely to drag on growth.

Ahead, the focus remained on how the jobs market responded to the reopening of the economy.

“What matters most for financial markets from here is the speed at which the labour market tightens, what that means for wages growth and of course the inflation data,” he said.

Spending over the rest of the year could be heightened. BIS Oxford Economics senior economist Sean Langcake said there would be more signs of recovery in Victoria and ACT as they emerge from lockdowns and spend more at the till.

“However, momentum will fade in early 2022 as households rebalance their spending toward services as travel and trading restrictions ease further,” he said.

EY chief economist Jo Masters said the economy is “roaring back” with spending, businesses and jobs.

“Pent up demand, combined with dollars in the bank and the wealth effect of higher house prices, suggests this spending boom will continue through the festive period,” Ms Masters said. From Black Friday to Cyber Monday inclusive, the Australian Retailers Association expects $5.4 billion to be spent.