Devastating toll of adulterous parents: Novelist STEPHANIE CALMAN only realised infidelity was not normal when she started dating

Even at quite a young age, some of us are confronted with the fact that one or both of our parents aren’t the faithful paragons we’d imagined.

We don’t want to think of them having sex at all, including with each other. To find out they’ve been doing it with other people can be shattering.

I was aware of another man in the background of my parents’ marriage from quite early on. But I didn’t connect him with the frequent rows, or even with my father moving out, which he did when I was five and my sister Claire was two. 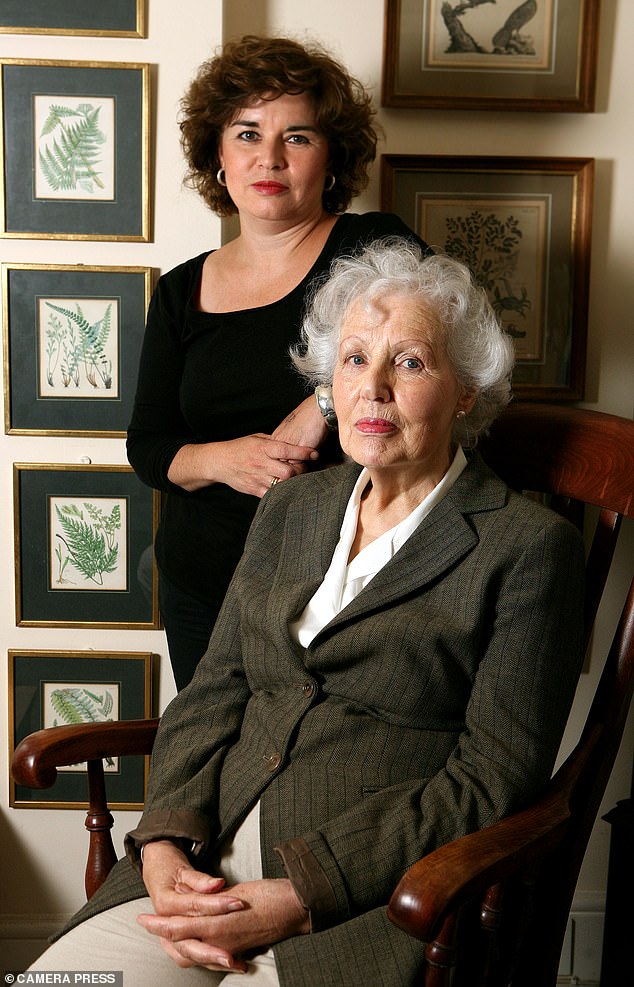 In films and plays, people are caught kissing or running out of bedrooms. Here were just adults, apparently behaving quite normally. Of the rage and pain, I had no idea. I thought the shouting, and even the breaking of things, was normal. There was no peaceful idyll to be wrecked, or no illusion of one.

The man was Dr T, my mother’s psychiatrist, who was treating her for depression and anxiety. When my father, the cartoonist Mel Calman, began an affair with Carol, whom he met through work, my mother sought reassurance she was desirable. Unfortunately, she turned to the other man whose opinion she valued, Dr T, who responded not by analysing the flirting, but by falling for her.

Meanwhile, Carol got pregnant, and ‘they all agreed’ on an abortion. Whether it was what Carol really wanted, I don’t know, but to have a baby unmarried in the Sixties was very challenging. Mum said Dad would never have abandoned Carol, nor would she have let him. A colleague who’d emigrated to Australia found Carol a job there, but again, whether it was her wish I don’t know.

It took me years to understand that my parents weren’t unfaithful for the hell of it, but were damaged by the kind of tragedies common to that generation.

Mum’s brother died before she was born, causing her parents to shut down emotionally. And during the war, Dad was evacuated, aged eight, to the home of a man who tried to abuse him.

His own father began losing his memory, but dementia was regarded as madness and he was taken to an asylum. I do wonder whether, had my parents gone for therapy together, things might have ended differently.

It’s a popular myth that children are better off so long as their parents stay together, no matter what. For me, being in the care of adults unable to manage conflict was what did the damage. I wound up in therapy myself at 18, and I believe their splitting up (their divorce was finalised when I was around nine) prevented things from getting even worse.

My mother later said dryly: ‘Your father somehow managed to know less about women, not more, as he went through life.’

She was right. When I was nine, and my sister about six, he fell for the woman who became our stepmother, an artist who was beautiful and gifted, but also damaged. 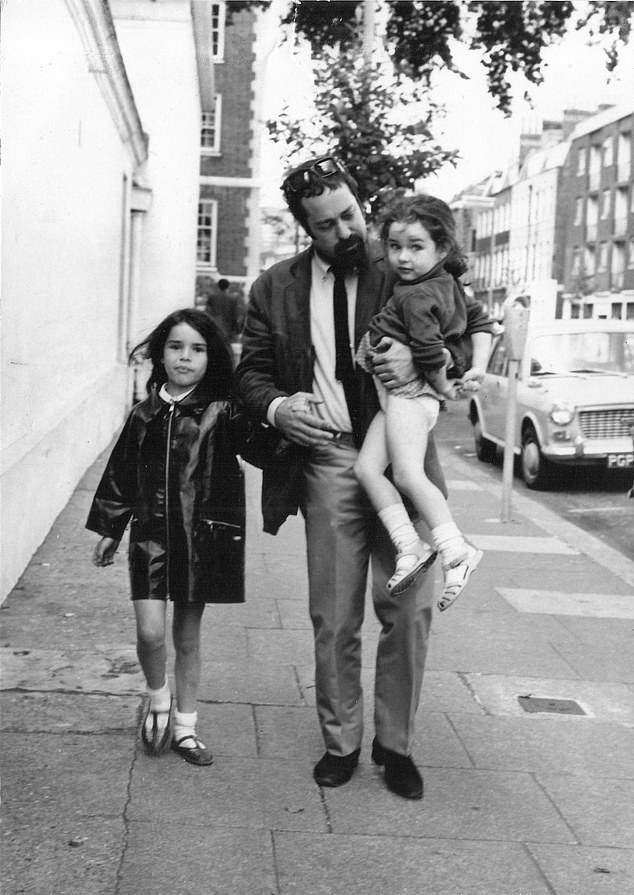 Stephanie Calman with her father, cartoonist Mel Calman (pictured), and her sister Claire

He was besotted. He took her on expensive holidays — once to Martinique — but she never seemed happy. To be fair, he had a temper and was also impossible.

I dreaded the end of the week. My sister and I had to spend weekends with them at their place, where the four of us kids — she had two — bonded over how badly our parents behaved. One Friday night, they threw a whole set of plates at each other, huge terracotta ones from Morocco.

So it was a shock when I saw her ring, and realised they were married. And, far worse, they’d done it without our even knowing. Any trust I had in men ended then.

It certainly didn’t improve their relationship, as they must have hoped it would. In fact, they both had affairs — this time repeatedly. He’d take us to visit women I later realised were girlfriends.

I don’t remember being told not to mention them, but then my stepmother would be away doing the same thing. They failed to deal with the issues they had, and none of it made them any happier. Any wisdom my father did have went into the cartoons for which he became known. ‘But it’s my turn to leave you’ was a line pretty much from life, as was the cartoon of a couple guiltily having dinner (below), implying marriage kills fun and even love itself.

Somehow he was able to translate personal disaster into humour and even insight. But it remained on the page. He and I argued frequently, and I gave my stepmother as good as I got, too.

At 15, I’d had enough. One Friday, I went to their place as usual and the shouting started — so I turned around and went home. My mother was away, and the peace and quiet was a relief.

In the meantime, my mother had met a kind but chaotic man who really loved her, and they bought a house in the West Country. Sadly, the summer we moved in he died of a stroke, leaving the wife he had left but not yet divorced, and five children. He was 46, I was 11, my sister eight. We came back home to London.

Mum was working hard to support herself as an illustrator and had few treats in her life. Sometimes rather solemn men would appear to take her out for a decent meal in a nice, tidy restaurant, away from our squabbling — and with no washing up. Some of them must have been married. They only materialised at dusk, like vampires — albeit generous ones — and never at weekends.

We liked Geoff best, who always seemed thrilled to see us and let us rifle through his pockets for sweets. ‘Marry him!’ we urged. ‘But he’s already got a wife,’ she said.

My father, meanwhile, tried to leave my stepmother many times. Eventually they too divorced, and he met someone else. Life calmed down for everyone. Except me.

Having learned the worst possible lessons about trust and commitment, I blundered on miserably before accepting I was choosing men who would let me down. Ironically, it was Dad who convinced me to get help. ‘Even if it turns out to be my fault,’ he said, ‘I’d rather anything than see you this unhappy.’ Maybe he had learned a thing or two after all.

I was still in therapy when a friend introduced me to Peter, who was bright, funny, and very patient. As I still wasn’t ready for the enormity of lifelong commitment, we took things slowly.

It was two years before we fell in love, and when he first asked me to marry him I panicked. Luckily for me, he sensed my argument against the idea — that he would get me pregnant and abandon me — was a defence mechanism, not what I really believed.

Once I realised I was properly in love, I decided I would declare my commitment to him in front of witnesses. There are no guarantees, but 30 years since our first date, I’m coming round to the idea of monogamy, and even happiness.

Having children was more terrifying, and I’m proud, if slightly amazed, to have made a happy home for them. Lawrence is now 22 and Lydia 21, and they show every sign of being normal.

In 1994, aged 62, Dad died, and I began going through his papers. I found a dozen or so letters from Carol, saying she missed him terribly, but was getting on with her new life. There was no mention of the pregnancy. I hope it all worked out for her. Given the way things went back here, perhaps she was better off in the end.

There were also letters to him from numerous other women, and his jottings about the impossibility of finding the right one.

Three years ago, Mum died at 88, and I started on her letters. There were several from Dr T, urging her to marry him, and — to my great surprise — two from my father, suggesting they try again.

As for Peter and me, it’s not all plain sailing. But when we hit the skids, instead of running away — or having an affair — I communicate. And if that doesn’t do the trick, we go to Relate. Together.

Influencer almost quit Instagram as trolls told her to kill herself

Farrah Abraham moving out of California following arrest: ‘I was really suicidal’