Legendary producer and NWA rap star, Dr. Dre (real name Andre Romelle Young) is in hospital following a brain aneurysm. He is reportedly recovering and recently shared a message to his fans on Instagram, letting them know he appreciates all of their well wishes while he rests up.

The NHS website describes an aneurysm as a “a bulge in a blood vessel caused by a weakness in the blood vessel wall, usually where it branches” — the brain is one of the most common places where it can occur. It also adds: “As blood passes through the weakened blood vessel, the blood pressure causes a small area to bulge outwards like a balloon.” The NHS notes that brain aneurysms only cause noticeable symptoms if they rupture.

Writing to his 5.2 million followers online, Dre said, “Thanks to my family, friends and fans for their interest and well wishes. I’m doing great and getting excellent care from my medical team. I will be out of the hospital and back home soon. Shout out to all the great medical professionals at Cedars. One Love!!”

The hospital that Dre is currently staying in, Cedars-Sinai Medical Center, is a popular choice with A-listers, including Kim Kardashian (who gave birth to her daughter North in the maternity ward there).

During his 35-year-strong career, Dre has worked with some of the biggest names in rap and hip hop including Jay-Z (who apparently penned Dre’s world famous track ‘Still D.R.E.’ in under an hour), Snoop Dogg, Tupac Shakur, Kendrick Lamar, Gwen Stefani. and Mary J Blige.

Back in 2015, following the acquisition of his headphone line, Beats by Dre, to Apple, Forbes named Dr. Dre “the world’s richest musical performer” of the year. 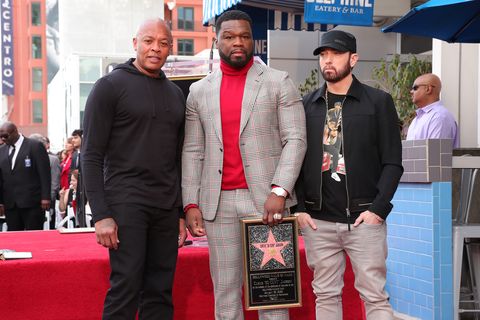 Dre was pictured last January alongside his famous protege, Eminem (real name Marshall Bruce Mathers III) and 50 Cent, when the latter received the honor of having a star attributed to him on the Hollywood Walk of Fame. The three have collaborated together multiple times.

n 1936, This ‘Vogue’ Editor Changed The Way The World Thought About Single Women