As many of Pete Evans' lucrative media and sponsorship deals evaporated within the space of 24 hours this week, it was easy to imagine it might be the last we would see of a man who has morphed from mainstream television star to polarising diet, health and lifestyle prophet before our eyes.

"I don't think he has a place in public life in Australia," said Jennie Hill, founder of feminist activist group Mad F—ing Witches, and one of the instigators of a swift and successful campaign against the former My Kitchen Rules host this week. "I think that disqualifies you from having a voice." 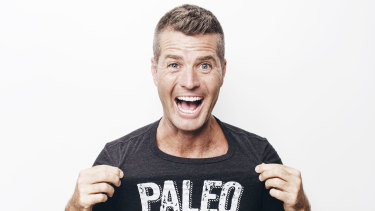 Despite his increasingly controversial views, Evans was still a highly bankable brand until on Monday he shared a cartoon image of a butterfly whose wing pattern was in the form of a "sonnenrad" (black sun), an ancient Norse symbol that has been appropriated by neo-Nazis in recent years.

As criticism flooded in, Evans deleted the post, apologised and said he was ignorant of the significance of the symbol, which also adorned the backpack of the Australian terrorist who killed 51 people in the Christchurch mass shootings last year. However, screenshots captured by others and shared on social media show him responding to someone asking if it was a black sun by saying, "I was waiting for someone to see that".

Evans did not respond to requests for comment. Late on Tuesday, Evans posted a video on Facebook in response to media reports: "The fact that I had to actually Google what neo-Nazi meant is pretty telling so I just want to tell you this once, and one time only, it is completely untrue, unfactual and a load of garbage."

"Anybody that knows me knows I stand for long-term sustainable health for all humanity. I don't think there is anything else I need to say, except for peace," he said.

By then, though, the damage was done. First to distance themselves was Pan Macmillan, the publisher of Evans' cookbooks, which announced it was "finalising its contractual relationship" with him. Retailers were invited to contact the publisher if they wished to return any of his books.

Then Ten dumped him from I'm a Celebrity… Get me Out of Here! Though the network would not confirm Evans' casting, or his dumping, a source close to the Byron Bay-based chef said he had only emerged from quarantine this week, and had been due to start shooting on Tuesday. Ten is believed to still be liable for Evans' fee, which is rumoured to be in the $100,000 to $200,000 range.

Then came the sponsors, and the retailers who carry Evans-associated product lines: Big W, Dymocks, Woolworths, House, Coles. Cookware brand Baccarat panned Evans, and coconut water brand Raw C – which was "both horrified and saddened by the religious and anti-Semitic undertones" of the post – revealed it had already decided it would no longer shell out to be associated with Evans.

As boycott campaigns go it was, in the words of Jennie Hill, "short and sharp, and successful".

"I think it was just a step too far," she said. "There was all this stuff that people knew was horrible and weird and not right before, but then the Nazi thing, it just went bang."

But just as with Donald Trump breaking free of his relationship with Fox News, Evans being dumped by the "mainstream" may allow him to emerge in a different form.

"It's a new world for Pete Evans, and he's had a tough 24 hours," said celebrity agent Max Markson, who knows Evans but does not have a professional relationship with him. "But on the other side, he now has the opportunity to build his own media empire, where he could be more powerful than he’s ever been."

Markson points to Evans' evolvenetwork.tv, the multimedia platform where, for $10 a month or $100 a year, subscribers get lifestyle advice and recipes. He also points to his social media following of "over two million".

"As we've seen with Trump, there's a whole new world and he is at the beginning of it, it will be his crusade," said Markson. "He no longer needs mainstream media – he can do all this on his own, doing what he loves, what he believes in.

"The people he talks to are not mainstream, they're in their own world. It's almost like there's a parallel world, an alternative reality."

In Evans' world, vaccination is to be avoided, COVID-19 is a conspiracy, and bone broth is a good substitute for breast milk for babies. He has worn MAGA hats, reposted QAnon posts, and hinted at conspiracies in high places.

In April he was fined $25,000 by the Therapeutic Goods Administration after claiming a $14,000 "BioCharger" device could help protect people against coronavirus. The following month Seven cut him loose from his $800,000 My Kitchen Rules contract due to cost-cutting and the show's ratings decline. In September, he hosted conspiracy theorist David Icke for a two-hour chat on his podcast.

New Zealand journalist David Farrier has been tracking the rise of conspiracy theories in the wake of coronavirus, and the grip they have on sections of the so-called wellness community. He believes it can be explained in part by a combination of open-mindedness to alternative views and suspicion of the mainstream, which goes well beyond health and diet to much broader concerns.

And while Evans' time in the mainstream may be over – for now at least – Farrier doesn't think it's the last we'll see of Evans, by a long shot.

"He's incredibly self-aware and I think he's seen that the more outrageous the things he posts, the more attention he gets, the more followers he gets. Being deplatformed just turns him into a martyr.

"I'd say it's a fork in the road for him," Farrier adds. "His mainstream days are over but I don't think it's the end of him in any way."