President George H.W. Bush died on Friday, November 30, at the age of 94. His passing has prompted reflection and respect from veteran journalist and author Evan Thomas:

George Bush’s mother taught him not to brag. “Don’t use ‘The Great I Am,'” she said. He learned the lesson almost too well. Politicians are supposed to boast – that’s how they get elected. But Bush came across, on the stump, as kind of uncomfortable with himself.

At the same time, he could seem too eager to please. His mother told him, “You should always share with others.” Bush was so determined to share that his nickname as a boy was “Have half.”

When he was Ronald Reagan’s vice president, he seemed to be so willing to accommodate the more conservative president that he came across, to some, as a kind of a “yes man.”

I was the Washington Bureau Chief at Newsweek at the time, and we did a cover story on Bush called “Fighting the Wimp Factor.”  We made him look manly on the cover, and talked about his wartime bravery, but by using the word, the overall impression was that, maybe, Bush was sort of a wimp. 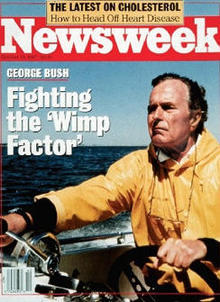 Boy, were we wrong.

As president, Bush showed a quiet kind of courage – to do the right thing, even if it cost him politically. Running for president in 1988, he had promised “No new taxes.” But when it became clear that the only way to cut the out-of-control federal deficit was to raise taxes, he did it.

That took guts. It probably cost him re-election in 1992.

At the same time, at the end of the Cold War, he put out the word: no gloating, no boasting. The Berlin Wall had come down, the Soviet Union was collapsing, but Bush had the great wisdom to know that it was a mistake to taunt.

George Bush was ambitious, yes, he was. And he could be politically expedient. But he was also humble. Bush believed, really believed, in country first. He was the last of his kind.

How much we miss him today.

A look at the life of the 41st President of the United States, Ambassador, Congressman, World War II veteran, and patriarch of a political dynast…

Your March 2020 Full Moon Horoscope Is All About Getting Situated