With the flick of a switch, or more likely a tweak of an algorithm, Facebook has followed through on its earlier threat to stop publishers and users in Australia from sharing or viewing any news articles on its platform.

After months of negotiations over the Morrison government’s proposed media bargaining laws, forcing tech giants Google and Facebook to hand over payments to news outlets (including The Age) for using their content, Facebook – without warning – pulled the plug. 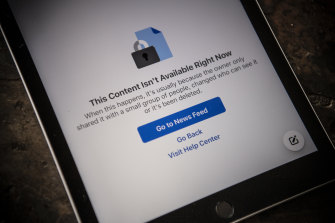 Despite Google agreeing to make annual payments to most major media outlets, Facebook is holding out, claiming that publishers derive more value from news sharing than it does.

If the social media giant was hoping its provocative move would garner attention, it succeeded – if not for the right reasons. In deactivating the ability to share news stories, it also managed to shut down dozens of major health, corporate, sporting and charity Facebook pages. For a tech company in the information business, it was an embarrassing mistake with possibly dire health consequences.

The backlash was swift. The federal government demanded that the social media giant immediately reinstate those pages unwittingly caught up in the dispute, and Prime Minister Scott Morrison was adamant that Facebook’s “bullying” actions would not pressure the government into backing down on its legislation.

But Facebook also has its reasons for holding firm. It knows that other nations are watching carefully what is going on in Australia. If it were to relent and pay up, as Google has, it fears it will create a ripple effect across the world, with media groups lining up to ask for funding.

Facebook is also having to respond to growing angst about its role in fostering an increasingly hostile and polarised political environment. In response, it has been dialling back how much news its users view for some time. Its modification that began earlier this month will even further reduce political content in users’ news feeds in Canada, Brazil and Indonesia. If successful, that plan will be rolled out further.

But its bid to limit news content is a double-edged sword. It may save users from some heated debate, but it also leaves the platform wide open to those who wish to spread false information while restricting fact-checked news content.

As Liberal MP Craig Kelly showed before being banned from Facebook for a week, he was able to freely promote his views on treatments for COVID-19 and mask wearing that were at odds with official government and medical advice. He is hardly alone.

The proliferation of conspiratorial information on social media platforms like Facebook is well documented. Despite directing huge amounts of resources into limiting its spread, it is struggling to turn off the tap, as it has done with news in Australia.

Facebook’s mission statement sets out its goal of wanting “to build community and bring the world closer together…to discover what’s going on in the world, and to share and express what matters to them”. In reality, that is far from true. While for many it certainly is still a popular forum for swapping family photos and sharing personal stories and interests, it has also become a powerful driver of falsehoods and inciting division.

Shutting down access to Australia’s diverse range of media outlets is hardly a step forward in combating the dark forces of the digital world. It’s time Facebook matched its platform’s high principles of good intent with its actions.

Taylor Swift’s back catalogue may have been sold for a second time, but her fight isn’t over

Greg Evigan says ‘70s sitcom ‘B.J. and the Bear’ wouldn’t be made today