“Maybe you didn’t mean it/ Maybe blonde was the only rhyme,” Carpenter sings on the track.

Sabrina Carpenter seems to have entered herself into the “Driver’s License” conversation, according to fans. 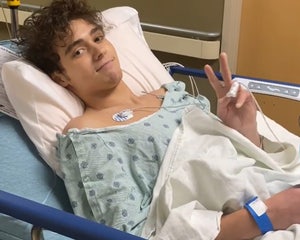 While Rodrigo has stated that it’s “not important” who the song is about, fans have speculated that her song is about her “High School Musical: The Musical: The Series” co-star and rumored ex, Joshua Bassett, as well as Carpenter, who Bassett is reportedly dating. And Carpenter now seems to have offered her own response.

“Maybe we could’ve been friends/ If I met you in another life,” Carpenter says in the first two lines of “Skin.”

“Maybe then we could pretend/ There’s no gravity in the words we write,” she continues. “Maybe you didn’t mean it/ Maybe blonde was the only rhyme.”

At another point, Carpenter talks about her getting close to a man, who fans believe is Bassett.

During the bridge, Carpenter sings, “Don’t drive yourself insane.”‘

Due to those specific “Skin” lyrics, fans have speculated that Carpenter is referring to Rodrigo, with one line standing out in particular.

In Rodrigo’s single — which hit No.1 on Apple Music, Spotify and the Billboard Hot 100 chart — the young actress, 17, referred to a “blonde girl” who is “much older” than she is while singing about heartbreak.

“And you’re probably with that blonde girl/ Who always made me doubt,” Rodrigo sings in the track. “She’s so much older than me/ She’s everything I’m insecure about.”

And, as previously mentioned, in “Skin,” Carpenter, 21, sings that “maybe blonde was the only rhyme.”

While neither Carpenter nor Rodrigo mentioned one another by name, it was recently revealed that Rodrigo’s original lyrics referred to a “brunette” and she had later changed the lyric to “blonde.”

That said, in an interview with Billboard earlier this week, Rodrigo said who the song is actually about is what’s “least important” to her.

“I totally understand people’s curiosity with the specifics of who the song’s about and what it’s about, but to me, that’s really the least important part of the song,” she said. “It’s resonating with people because of how emotional it is, and I think everything else is not important.”

Meanwhile, as for Bassett, he — like Carpenter — recently released a song that fans also believe is about the drama.

In the track — which he said he wrote after he found out a friend “had been lying” about him behind his back — he sings, “I know what you say about me / I hope that it makes you happy / You can’t seem to get me off your mind (Get me off your mind) / Oh, I know you’re lying through your teeth / You told them the lies that you told me / I’ve had enough of it this time (Had enough this time).”

In addition, at one point in the “Lie, Lie, Lie” music video, Bassett can be seen driving in a car alone, which fans think could be a reference to Rodrigo’s “Driver’s License.”

Major British Broadcasters Draw Up Coronavirus Plans, Shows Like ‘Celebrity Race Across The World’ At Risk