As Stylist’s digital writer, Lauren Geall writes on topics including mental health, wellbeing and work. She’s also a big fan of houseplants and likes to dabble in film and TV from time-to-time.

Looking to make progress in your career in 2022? Check out these top tips from career expert Sarah Ellis about how to overcome a career standstill and move forwards.

As a time of year that’s all about new beginnings and setting goals for the year ahead, January is often a period when many of us reflect on our careers and what we want from the next 12 months at work.

However, after living through almost two years of a pandemic – and dealing with the disruption of working from home and the day-to-day stress of coronavirus restrictions – many people have been left feeling stuck when it comes to their career.

You only need to look at the number of people who quit their jobs during last year’s ‘great resignation’ to get a sense of how many people have been feeling in need of a change; research conducted by Glassdoor revealed that 30% of women surveyed said they had changed jobs since the start of the pandemic.

But what about those people who didn’t quit their jobs? If you’ve been searching for progression to no avail, how can you go about ‘unsticking’ yourself from your career standstill and securing your next big move?

According to Sarah Ellis, co-founder of the career development platform Amazing If and co-author of the new book You Coach You: How To Overcome Challenges And Take Control Of Your Career, the first thing we all need to do is reframe the way we view ‘progression’.

“We like to talk about this idea that all of our careers are now squiggly – rather than having ladder-like careers which are all about steps, and where progression means promotion, we feel like careers now are full of change, uncertainty, possibility and opportunity, all at the same time.”

You Coach You is a practical guide to self-coaching.

With this in mind, Ellis says we have the opportunity to figure out “what we want our careers to look like for ourselves” and take control of our progression – something she and her co-author Helen Tupper were keen to explore in their new book.

“One of the main reasons why we wrote You Coach You is because we want to democratise career development – we want everyone to have access to really good quality ideas, tools and techniques, so they can help themselves and those around them,” she explains.

“We know that coaching works – it can help to unlock your thinking, get unstuck and uncover new ideas. But for the vast majority of people, it’s inaccessible – either because organisations can’t afford to fund it or because we can’t afford it for ourselves.”

Ellis continues: “However, we think it’s time to let go of this idea that a coach has to be a person, and see coaching as an approach that we can all learn and practise. It’s a skill like any other skill – which we can improve for ourselves – so the reason why we wrote You Coach You is to give everybody a chance to practise.”

While coaching can help you at any point in your career, it’s particularly useful when you’re feeling stuck – something which, as we’ve already mentioned, many people are feeling right now.

So, how can you tell when you’re at a ‘career standstill’, and what can you do to overcome it? To give you the tools you need to get started, we asked Ellis to share some of her expert insight. Here’s what she had to say.

How can you tell when you’re at a career standstill? 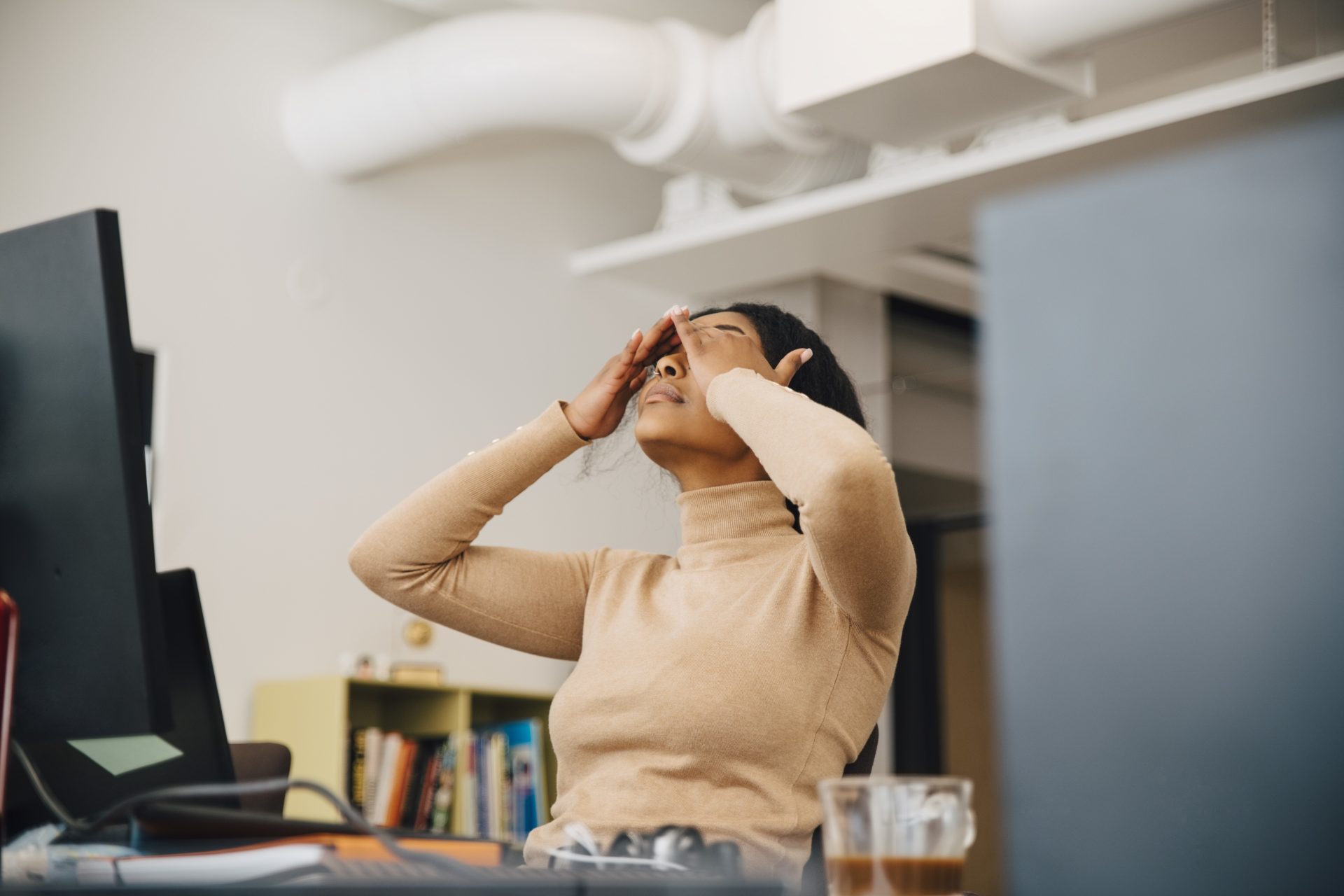 If your work leaves you feeling drained, you could be at a standstill.

If you’re not sure whether you’re at a career standstill or just feeling a bit ‘meh’ in general, Ellis recommends taking some time to think about exactly how you’re feeling.

“I think for people it can be almost like a feeling of being drained – you just don’t have the motivation or energy to deal with work you’re doing,” she explains.

“One of the questions I always ask someone is: what have you got to look forward to at work this week? If your answer to that is nothing, or you really struggle to answer and can’t think of any moments where you’re thinking, ‘Oh, I’m excited about that,’ then you’re probably at a standstill, because you’re no longer learning and growing.”

She continues: “We all like to feel like we’re doing that – our brains are wired that way – so if we don’t feel like we’re learning and growing, then it sort of dulls our enthusiasm and affects our optimism. And that just means that you don’t have that sense of something to look forward to when you get up every morning, or you’re not able to identify something you’ve achieved at the end of the week.”

While some people might be able to identify a moment that made them feel stuck, such as losing out on a big promotion, Ellis is keen to stress that many people find themselves reaching that point over a course of weeks or months.

“There can be really tough times in our career when it can feel hard to stay optimistic, and those periods can be quite incremental – they can creep in,” she adds. “Very rarely do we go from, ‘Oh, it’s going really well’ to ‘It’s going really badly’. Sometimes we don’t even notice it.”

How to coach yourself out of a career standstill

Coaching yourself out of a career standstill starts with three simple steps.

If you’re feeling stuck and want to get your career moving once again, Ellis recommends giving the following three steps a go.

“The first thing you can do is ask yourself some good Coach Yourself questions,” Ellis says. “Coach Yourself questions have three key elements: they’re open questions (so they start with who, what, why, where, when or how), they’re asked one at a time (because if you bunch them together you lose insight and don’t gain the self-awareness) and they’re ‘I’ questions (instead of asking, ‘Why won’t my manager promote me?’ you ask, ‘What can I do to continue to progress?’).

“While we supply some Coach Yourself questions in the book, everyone can write their own ones. But a couple that are good to get people started if they’re feeling a bit stuck are:

“The other thing I would encourage people to explore when they’re in the questioning phase is to move away from career plans. You’re much better off thinking about possibilities – what possibilities you’d like to explore – rather than being fixed to a plan.”

“Often when we feel stuck it’s because the promotion we want isn’t available to us, or because we want to move to a different department but we’re not sure how your talents will transfer to that area. But if we think about what we want our progression to be in those terms, it can feel quite binary – it either happens, or it doesn’t. And that can lead to feeling stuck.

“Next, you need to think about at least six ways that you can get closer to your ‘why’ – in this case, spending more time developing people. That could be a promotion, but it could also be mentoring, or volunteering, or supporting people who are just starting out in your organisation. So suddenly, you’ve got lots of options, so you can feel like you’re starting to make some positive progress.

“If you do these things, you’ll be so ready for the ultimate goal that you have in mind – in this case, being a manager – by the time it happens, and often bigger opportunities come along too.

“I think the difference is between waiting versus creating. When you’re feeling stuck, rather than waiting for something to happen – as that feels quite passive – think about how you can change your mindset to create opportunities that you can control, such as developing your skills, learning new ones or building relationships.”

Write down your small successes

“In moments where you feel like you’re going around in circles or stuck, you can feel more pessimistic than optimistic. And that’s really understandable, so you shouldn’t beat yourself up for that – I don’t believe in relentless positivity.

“But I do think that when we are more optimistic, we’re better at spotting opportunities, solving problems and asking for help. And I feel like all of those three things are really important when we are stuck, so we need to create an optimistic environment for ourselves because that’s going to help us unlock our thinking and get unstuck.

“One way to do that is by spending some time at the end of the day writing down one very small success from your professional or personal life. It’s really important that you write them down as that helps your brain to process and understand your success. And the more you spend time with that the more you give yourself credit for that success.

“And if you write them down in the same space every day, you build up a bank of very small successes, and that helps us to feel more optimistic and build our resilience reserves. And when we have a tough day or week, it reminds us that there is always something good we have done that day, even if it’s something like taking a half-hour walk.

“It also forces you to press pause for five minutes and just go, ‘I know I’ve been really busy doing stuff, but what’s like one very small success that I’ve had today’. And that just helps us to feel like we are getting unstuck and making progress, because we feel like we’re moving forward and getting started.”

You Coach You: How To Overcome Challenges And Take Control Of Your Career is out now

Dad Gets Tattoo to Match Son's Life-Saving Heart Surgery Scar: 'He Should Be Proud'

What Lockdown Taught Me About The Beauty Of Online Friendship