Australia’s university sector is in an unprecedented crisis as it faces a series of immediate and longer-term challenges brought sharply into focus by the pandemic.

The most urgent concern is the continuing absence from local campuses of hundreds of thousands of international students who pay course fees at higher rates than domestic students. Australia’s international border closure, in place now for more than a year, has locked out these students and severely interrupted their education plans. 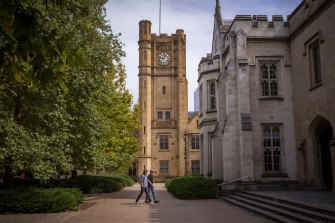 Some 17,300 jobs in higher education have been lost in the past year.Credit:Wayne Taylor

The impacts have been profound. The golden torrent of fees paid by students from China, India, South Korea, Malaysia and elsewhere, which helped make some universities seriously wealthy in recent years, has diminished. The financial stability universities might have hoped would last forever has been seriously undermined.

Some 17,300 jobs in higher education have been lost in the past year as universities cut costs and deleted hundreds of subjects and several courses. Students who endured the difficult studying conditions in 2020 reported a considerable decline in satisfaction from their university experience.

The financial crunch goes well beyond the university gate: the absence of international students over the past year is estimated to have cost the broader economy as much as $18 billion. Throughout the pandemic, though, the government declined to give universities access to JobKeeper support – a strategy that ultimately led to the loss of thousands of jobs. In turn, morale among remaining staff slumped amid pressure to create online learning modules and teach from home.

The shock of the pandemic-related disruptions coincides with efforts by universities to adjust their business models and course structures following the federal government’s move in 2017 to back away from demand-based funding support. In many cases they did not move fast enough. It’s important to remember student satisfaction was an issue before COVID-19 struck as some universities at times sacrificed quality teaching in the race to attract greater numbers of Chinese students. The weight of Chinese money has also raised, in some instances, legitimate questions about academic freedom and the theft of intellectual property under so-called Chinese government talent recruitment schemes.

The federal government wants universities to develop more courses that are specifically designed to meet the future demand for jobs. Its so-called Jobs-ready Graduates funding system for universities is designed to entice more students into teaching, nursing, science, technology, engineering, maths and languages courses by offering lower fees while increasing the cost of broad-based arts and humanities degrees.

The federal government also wants universities to diversify their foreign student base, and thus their geographical source of revenue, meaning there must be far less marketing of courses to students from China, for example. To that end, the government has released a consultation paper outlining the considerable range of issues that will underpin a 10-year strategy for tertiary education. The balance and regional sourcing of international students is already shaping up as a critical issue in that strategy.

While entry into Australia stays restricted during the pandemic, and no mass quarantine facilities have yet emerged, the predicament faced by universities will remain. International students, soured by being turned away from Australian opportunities, may well find more accessible education facilities elsewhere in the world, such as Canada, the US and the UK.

Our universities are vital cultural and public institutions. They should be cornerstones of sophisticated liberal nations, providing free-ranging, vibrant and relevant education. They should foster critical thinking while generating valuable research. They should advance the nation’s intellectual output, provide the bulk of our leaders across many fields and reach out across borders and benefit the broader community.

But they are at a profound juncture. Amid financial, health and philosophical challenges and facing an uncertain relationship with their main funder, the federal government, they have lost confidence and a clear idea of their own futures. Between them the government and the universities must find that confidence again, for all our sakes.

The best IT Cosmetics gifts you can buy at Ulta

The 2020 Olympics in Tokyo Will Be Postponed Due to Coronavirus