NASHVILLE — Fred Foster, the record producer and song publisher who championed the emerging careers of Roy Orbison, Kris Kristofferson and Dolly Parton, died here on Wednesday. He was 87.

His publicist, Martha Moore, said the cause was complications of a stroke.

Mr. Foster’s most enduring early success came as the producer of Roy Orbison’s No. 1 singles “Running Scared” and “Oh, Pretty Woman” in the early 1960s. Along with the likes of “Crying” and “Only the Lonely (Know How I Feel),” all of Mr. Orbison’s hits from this period were issued by Monument Records, the label Mr. Foster established in Washington in 1958 (it took its name from the Washington Monument) and moved to Nashville two years later.

Before Mr. Foster became involved with his career, Mr. Orbison had released only two minor singles on Sun Records, neither one a big hit.

Mr. Foster also provided a boost to the fortunes of the 19-year-old Ms. Parton, whom he signed to Monument in 1965. She recorded her first two Top 40 country hits, “Dumb Blonde” and “Something Fishy,” for the label before going on to become a star on “The Porter Wagoner Show” on television and with RCA Records.

“You saw things in me that nobody else did,” Ms. Parton said, referring to Mr. Foster’s willingness to take a chance on her, at the 2016 ceremony at which he was inducted into the Country Music Hall of Fame.

“Sometimes you just know — sometimes,” Mr. Foster explained, alluding to his instincts about Ms. Parton in a comment published by the Hall of Fame. “And that makes up for all the times you had to guess.”

Maybe even more prescient than his patronage of Mr. Orbison and Ms. Parton was Mr. Foster’s signing of Kris Kristofferson to a songwriting contract with Combine Music, his fledgling publishing company, and later — despite Mr. Kristofferson’s commercially questionable singing voice — to Monument as a recording artist.

Mr. Kristofferson’s 1973 single “Why Me” was his only recording for the label to reach the pop Top 40, but “Me and Bobby McGee,” on which he and Mr. Foster share the writing credit, became a posthumous No.1 pop hit for Janis Joplin in 1971.

Combine also published Mr. Kristofferson’s “Sunday Morning Coming Down” and “Help Me Make It Through the Night,” a pair of mystical, existential ballads that became enduring crossover hits, “Sunday Morning” for Johnny Cash and “Help Me” for Sammi Smith. They were subsequently recorded by scores of others. 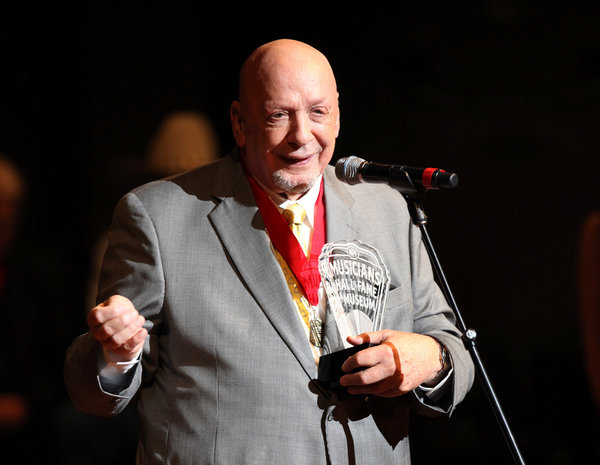 Tony Joe White’s compositions “Polk Salad Annie,” a Top 10 hit for him, and “Rainy Night in Georgia,” a Top 10 hit for the soul singer Brook Benton, were also Combine titles, as was the Elvis Presley hit “Burning Love,” written by Dennis Linde.

Fred Luther Foster, the youngest of eight children, was born on July 26, 1931, on a farm in Rutherford County, N.C. His father, Vance Hampton Foster, raised cotton and sorghum and played the harmonica. His mother, Clara Marcella (Weaste) Foster, was a homemaker.

Enthralled by music at a young age, Mr. Foster moved to Washington when he was 18 to pursue a career in the record business. He worked in various capacities there, including as the supervisor of the country singer Jimmy Dean’s first recording session, a 1953 date that yielded the Top 10 country single “Bumming Around.”

Mr. Foster worked as a talent scout for Mercury Records. He later recalled that he had urged his superiors there to bid aggressively for the talents of Elvis Presley, then largely unknown. But his effort was to no avail: Presley signed a contract with RCA instead.

In 1963, Mr. Foster established Sound Stage 7, an R&B-oriented subsidiary of Monument. The soul singer Joe Simon’s 1969 recording of “The Chokin’ Kind” for the label became a million-selling pop and R&B hit.

Monument also released several influential instrumental recordings in the 1960s, including the saxophonist Boot Randolph’s “Yakety Sax,” a Top 40 pop hit in 1963. Another recorded version of the song served as the opening theme for the long-running British comedy series “The Benny Hill Show.”

Mr. Foster sold Monument and Combine in the 1980s but continued to work as a producer, most notably on “Last of the Breed,” a 2007 album that teamed Willie Nelson, Merle Haggard and Ray Price. The project earned Mr. Price and Mr. Nelson a Grammy Award for best country collaboration with vocals for their performance of the Hank Williams staple “Lost Highway.”

In 2016, the Recording Academy presented Mr. Foster with a Trustees Award for lifetime achievement.

“I tried to do something time would not be critical of,” Mr. Foster said that year in an interview with The Tennessean, reflecting on his contributions to the music industry.

“It’s like Orbison said to me one time, ‘What’s the most important thing we’re going to do?’ I said, ‘We’re going to eliminate every gimmick you come up with. They don’t endure.’ ”

Nutrition coach, 35, who hasn't drank water in a YEAR