The curtain goes up slowly. Very slowly. So slowly that you have time to take in the details – beige furniture, patterned socks, clean surfaces – and start to build the scenario in your mind. As you see the silent dance of two retirees, wordlessly going through their dinner ritual, as they have done for 50 years, you notice the neat sidestepping of intimacy, the deafening absence of communication. It’s a masterful build-up to the first line of Grand Horizons, American playwright Bess Wohl’s Broadway debut, here receiving its Australian premiere.

Nancy French wants a divorce. That’s it. That’s the line. Her husband, Bill, grunts in response. And with that we’re off on a hilarious but gripping deep dive into intergenerational family life. 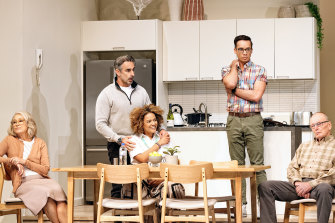 On the surface it is a textbook sitcom, from Renee Mulder’s versatile but undemonstrative kitchen sink set and understated costumes, to the instantly recognisable characters – the grumpy old man, the put upon wife, the grown-up kids who aren’t sure who’s meant to be the grown-up. The revelations, such as they are, are not shocking – at least, not to the audience – and the reactions almost comfortingly predictable. But the power of minute observations builds as the play unfolds.

There is a beautiful clarity at the heart of Grand Horizons. A big part of this is Wohl’s story, which transforms an everyday family saga into a deftly constructed story arc paced with show-stopping sidetracks and dramatic punchlines. Just as important is the direction, by Jessica Arthur, and the performances she draws from the top-shelf cast.

As Nancy, Linda Cropper revels as the woman who, after a lifetime of being defined by others, dares to claim space for herself. Her gracious resolve, almost entirely free of bitterness, at first makes a monster of her husband Bill, a stony-faced John Bell. His transformation, first into comic lothario, and then into vulnerable human being, is miraculous.

Anti-Plastic Author Not Happy When Book Is Wrapped In Plastic