Ugly House to Lovely House couple are left with an unfinished home despite spending £100,000 MORE than their £150,000 budget because they can’t afford renovations drawn up by the show’s architect

Wendy and Alan, from Colchester, Essex, said they wanted to renovate the dated exterior and impractical interior of their £650,000 property in November 2016.

The couple, who lived in the home with their two daughters  Sophie, 13, and Olivia, 16, had a generous £150,000 budget to complete the transformation and recruited Chris Dyson to help with their plans.

But after the architect’s first proposal proved too expensive for the couple, they were left ‘frustrated’ as they ditched almost all of their plans to renovate their home and focused solely on building his bold extension.

And many viewers were shocked after Wendy and Alan revealed they had actually spent £250,000 on the extension, centralised porch and new windows for the home.

It was later revealed the couple were only able to afford renovations to the lounge, music room and top floor rooms, including their master bedroom, two years later. 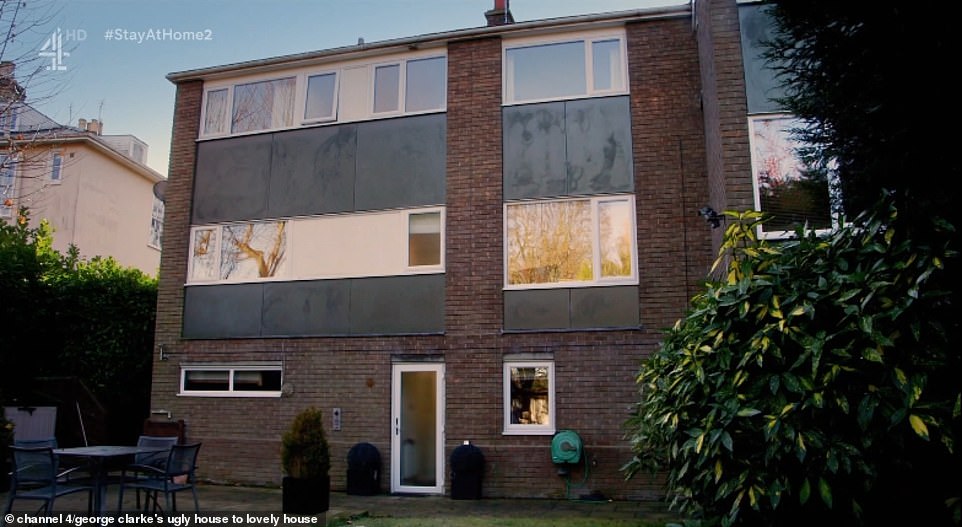 George Clarke’s Ugly House to Lovely House viewers slammed an architect advising a couple last night after they spent over £100,000 more than initial budget but still couldn’t finish his ambitious renovations (pictured, the back of the property before)

Wendy and Alan, from Essex, wanted to spend £150,000 transforming their entire home but ended up splashing out £250,000 on a huge extension and new windows after seeing architect Chris Dyson’s ambitious plans  (pictured, their enormous extension at the back of their home)

George first visited the home in Colchester in November 2016, with Wendy explaining the couple felt uninspired by the home.

The part time school finance assistant said: ‘It looks like a block of flats really. Even the windows, to me they’re really ugly.

Meanwhile  finance professional Alan added: ‘From the outside, it looks like a large house but the rooms are just not practical.’

From the boxy porch, the first floor opened onto a kitchen diner with a living room which dog legs into a 1980s extension. 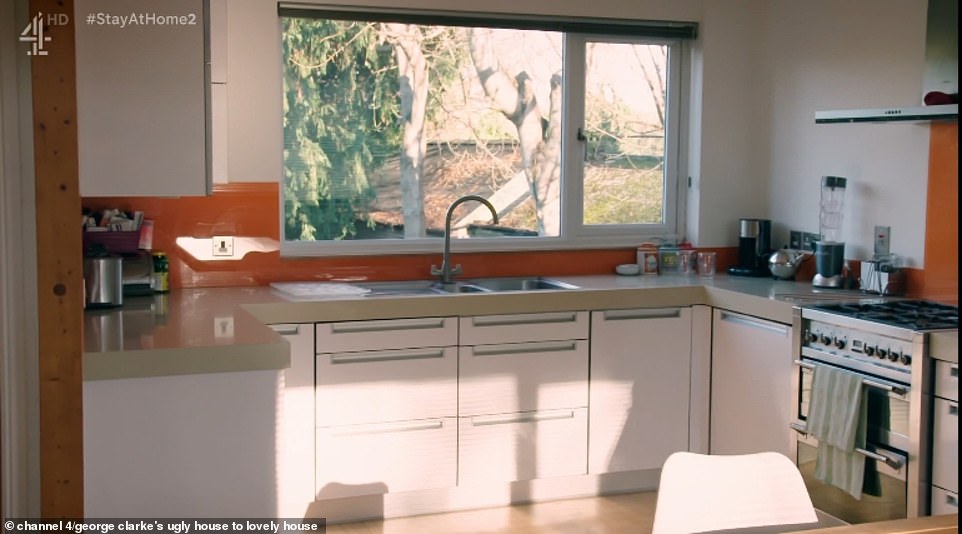 The couple said they were keen to stick to their £150,000 to mend the impractical layout and ‘rabbit warren’ of rooms within their home (pictured, the kitchen) 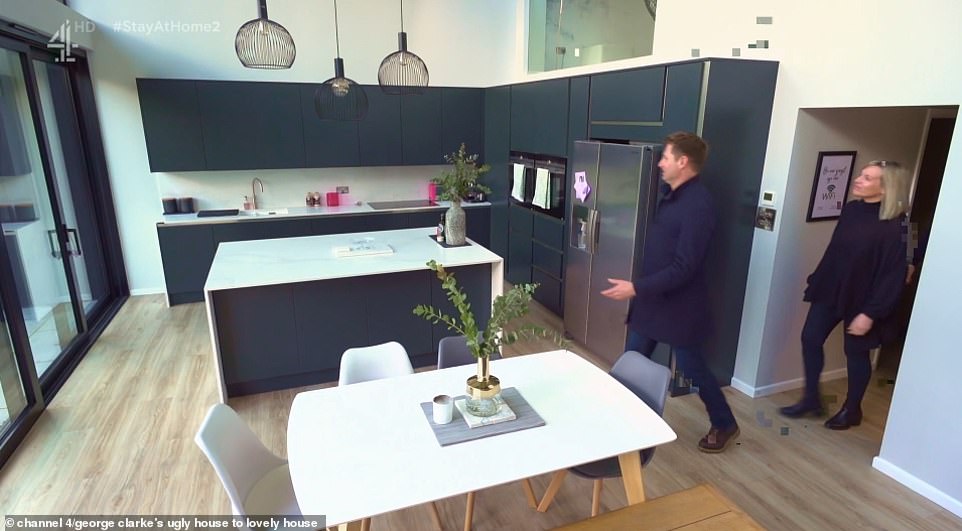 Instead of focusing on the main house, they built a huge extension at the back of the property, providing them with a new living area (their new kitchen)

Meanwhile the ground floor was a rabbit warren with a tucked away utility room, with a double garage, and elder daughter Olivia using the rooms at the front.

Meanwhile, there was also a dilapidated conservatory that the family used as a gym.

Upstairs, there was a bedroom for younger daughter Sophie, a study, a guest room and a tiny bedroom that Wendy and Alan used as their master suite.

George said it was ‘amazing’ that the family had ‘loads of room’ in the garden which offered a large amount of potential on an extension. 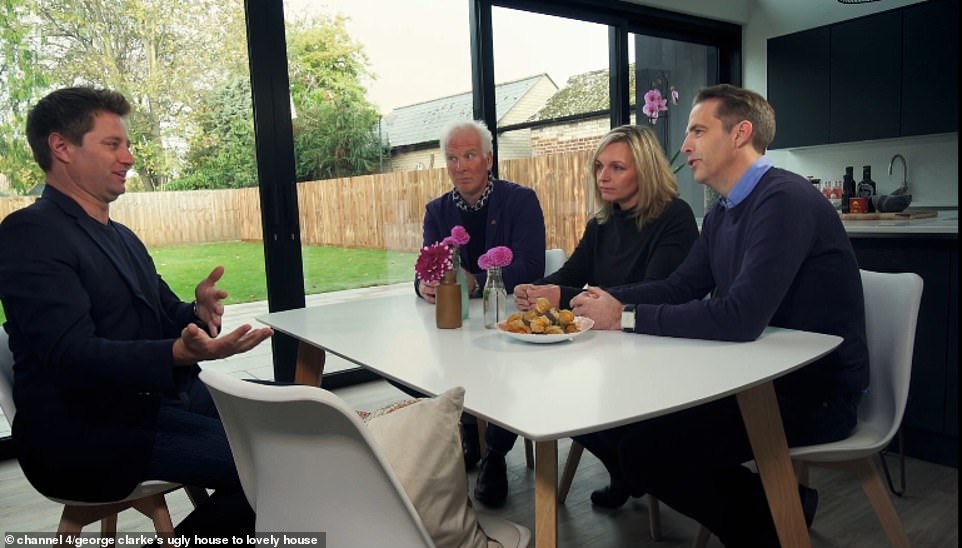 Viewers were highly critical of the architect Chris Dyson (left), and slammed him for presenting the couple with ambitious plans that they were unable to afford

The couple said they had a budget of around £150,000 to renovate the home, because they had ‘a lot of work’ to do.

But Alan added: ‘We have some contingency there. If we get the house we really want, then I’m happy to dip into that contingency.’

George recruits architect Chris to breathe new life into Wendy and Alan’s outdated period piece, who revealed he wanted to ‘positively connect the garden with an extension’.

Upon seeing a model of the re-figured property, the couple were blown away, calling Chris’ plan ‘gorgeous’. 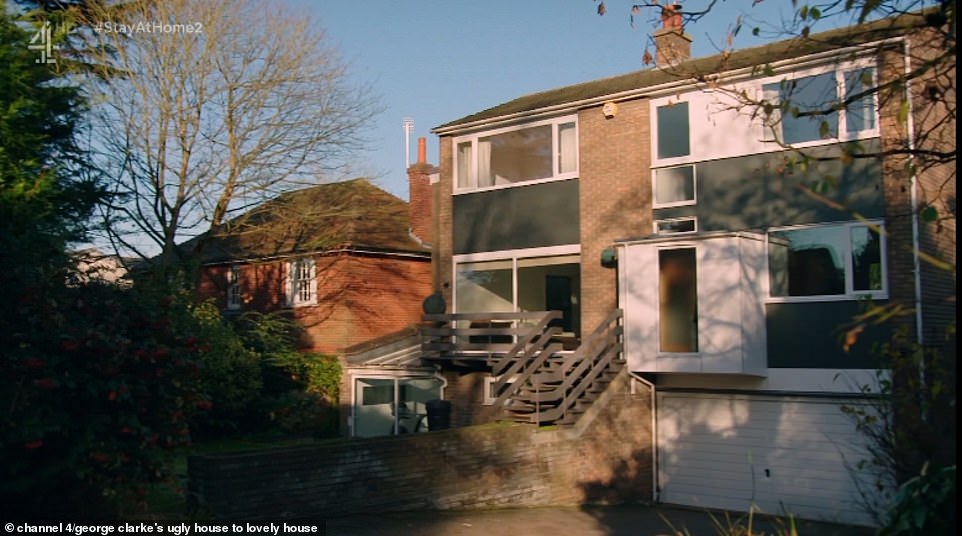 Wendy called the front of their £650,000 property in Colchester ‘ugly’ and said the couple were focused on changing the exterior appearance of their home

His big plan would be to dramatically change the look of the front of the house by adding a large centralised staircase and porch, replacing the tired windows.

Meanwhile at the back, he would disguise the ugly rear with a large double height extension with floor to ceiling glazing and huge sliding doors giving them a greater connection to the garden.

But when Chris unveiled his plans to remodel the garden, George questioned how affordable it would be.

Chris confessed: ‘It is stretching the budget, but in a way it’s an architect’s job to consider how things sit around a house.’ 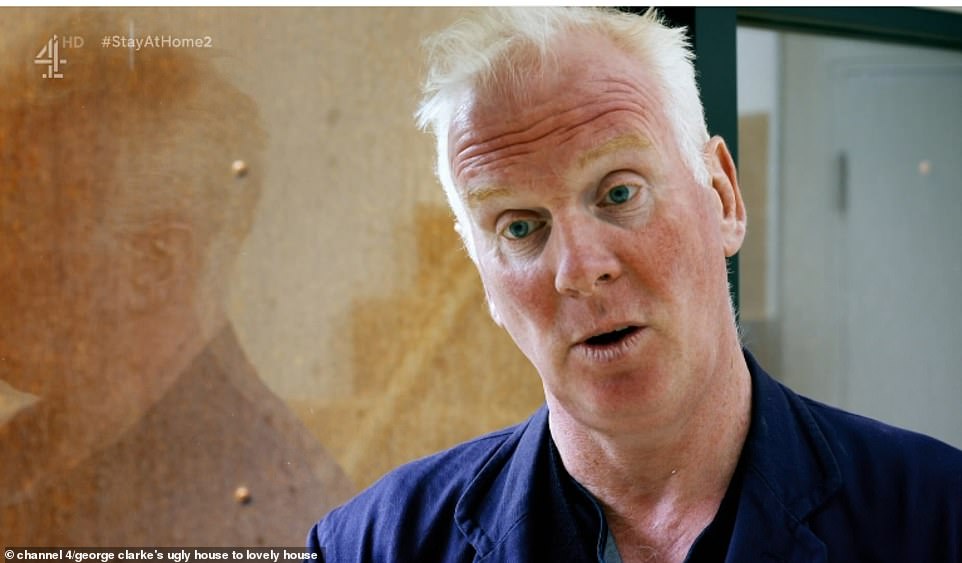 After unveiling his initial plans for the couple’s home, the architect admitted the plans were ‘stretching the budget’ but defended it as ‘an architect’s job’ to consider the entirety of the plot

By February 2017, there was a set back for the couple after they priced up Chris’ design and it came back hugely over budget.

Wendy confessed: ‘We’re a bit upset because we gave the budget, he’s created this amazing project and we can’t afford it.

‘We don’t want to spend £150,000 on just the rear extension and then we’ve got no money to do anything else on the house and then we’re left with something that’s not finished.’

Meeting with Chris for an emergency chat, he offered him their advice, saying: ‘I would try to leave the main house as is, but I would spend all the rest of the house on the new extension which is adding value to the property. That’s the real wow this house would have.’ 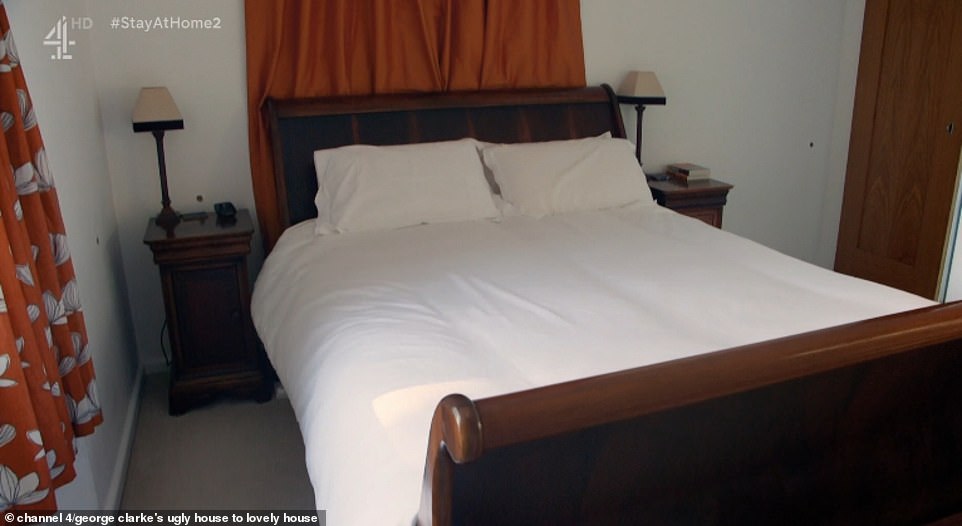 After spending £250,000 on  the renovations, the couple were forced to ditch plans to transform the top floor of their home, including their bedroom (pictured) 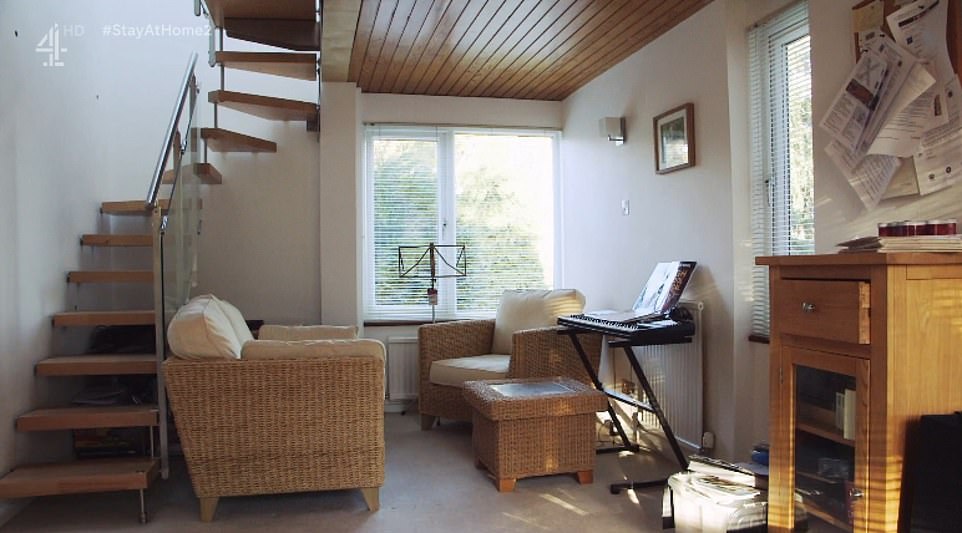 After the extension was built at the back of the house, Wendy and Alan’s  home was left half-finished, with rooms including their lounge and music room still to be complete

Eventually they all agree that the front and the back of the property will be transformed while they forgo their reconfigured master suite or any changes to the whole of the top floor.

Three months after reconfiguring their plans and with planning permission agreed, work in Colhester is underway.

Alan admitted that they’d been stunned by how much it had cost, revealing: The budget has just been blown out of the water really.’ 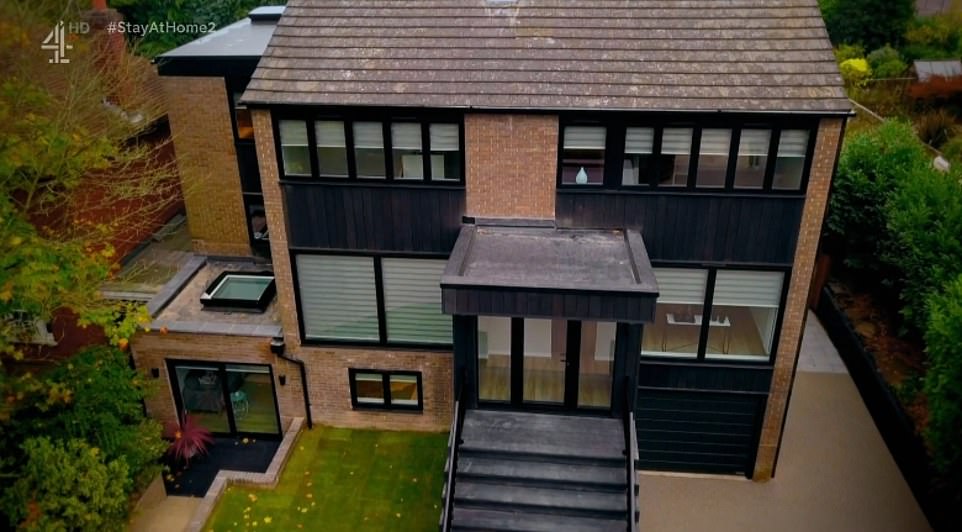 Instead of finishing the transformation in the front of the home, the couple spent their £250,000 budget on the exteriors, including a new centralised porch and new £30,000 windows

Alan said it was ‘frustrating and disappointing’, while Wendy called it ‘a learning curve.’

But as a novice project manager Wendy confessed the excitement was wearing thin and, six months into the project, she said: ‘I thought it would be much easier.

‘But it is such a big project and so many things to think about, it’s taking over my life. I’m not really finding it enjoyable.’ 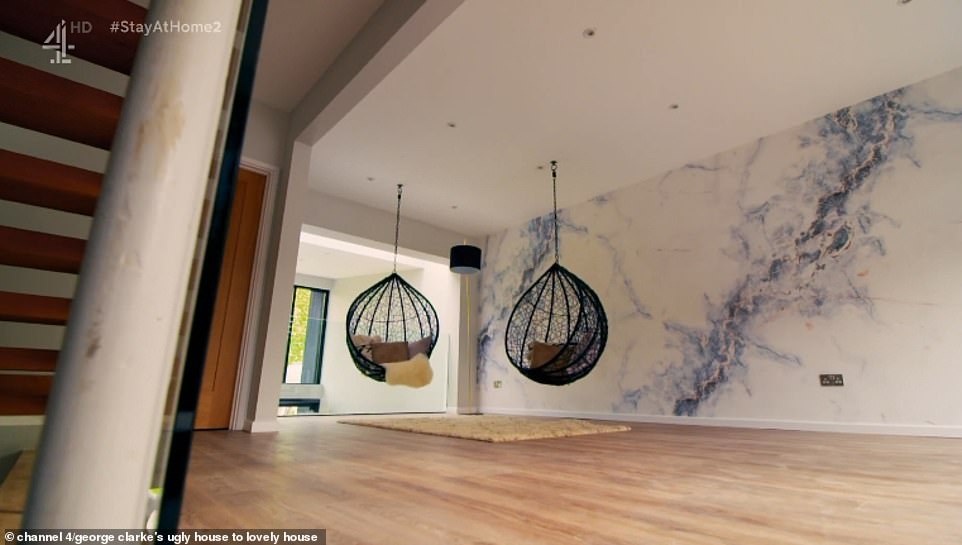 In the space where their kitchen had once been, they were left with an open-plan reception area where they placed two hanging chairs

The family installed the new centralised front porch before spending £30,000 on new windows for the home.

In October 2017,  George revisited the couple to see how the home was transformed, with presenter calling the front of the house ‘brilliant.’

Wendy called it a ‘total transformation’ and said it was ‘unrecognisable’, while Alan said: ‘Exceeded my expectations.’

Meanwhile George compared their enormous extension into their back garden to ‘an art gallery’. 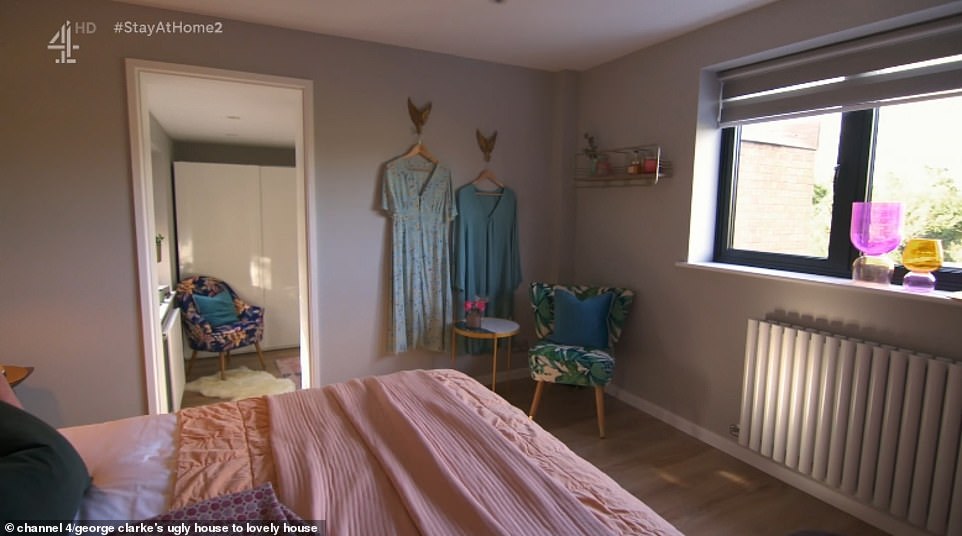 Two years after their initial renovations, the couple finished their home with tweaks to the upstairs rooms, including changing the room in which they had their master bedroom and painting the walls

But the changes came with a massive cost, with Alan admitting: ‘We went for the increased budget for £250,000 and that was the ceiling for us. We have managed to get it done for that number.

Chris defended showing the couple the more expensive scheme, saying: ‘As architects it’s important to have a dream and it’s based on their brief but you’re allowing the client to dream a little.’

‘Then you can pare it back. You can find the essential qualities of the dream.’ 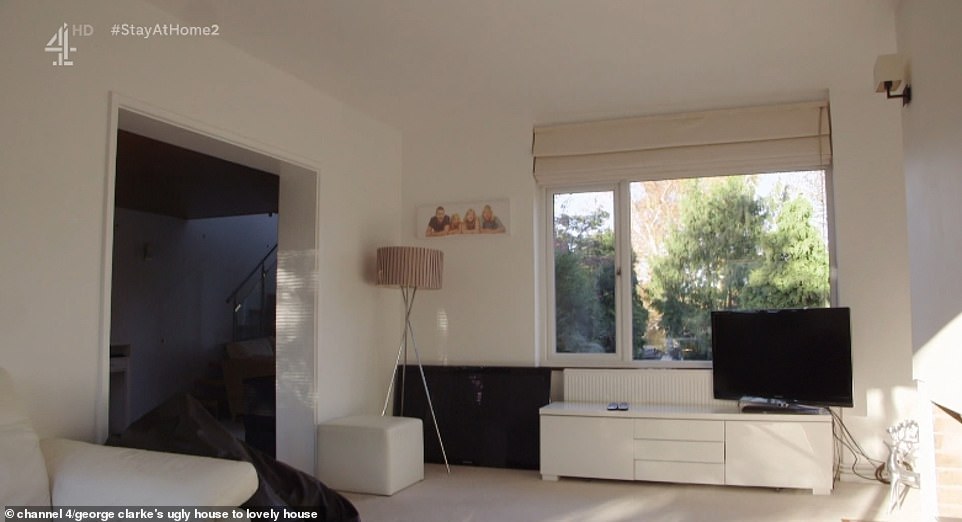 After completing the extension, the couple lived with their dated and drab lounge for two years in order to save up for further renovations (pictured) 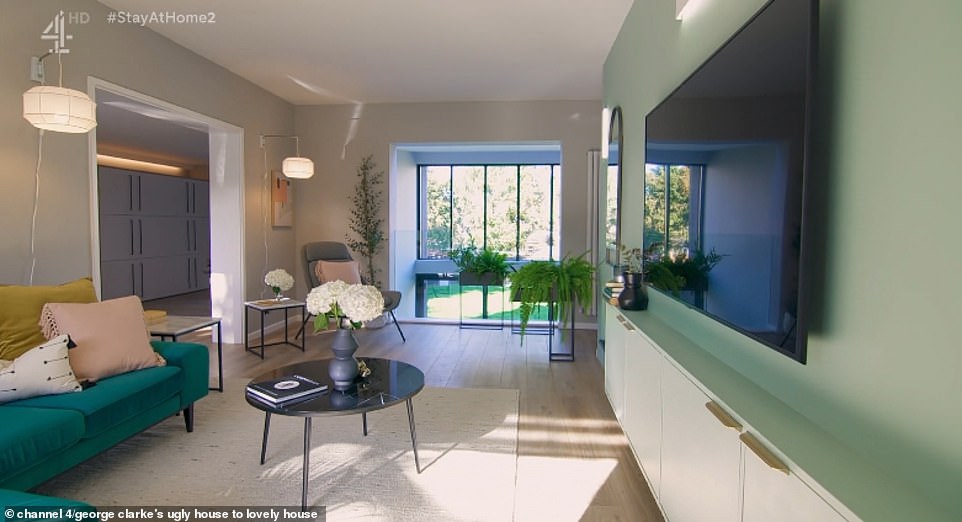 Wendy and Alan revealed the stunning upstairs lounge to George, adding that they often spent time in the room during winter months

Alan said it had ‘absolutely’ been worth ‘every penny’, while Penny said: ‘What we’ve got is totally amazing.’

Yet they were unable to finish their home, with no budget left to change their lounge, music room or the top floor of the property.

After living in a half finished house for two years, they finally bought back the builder to finish the job.

Wendy confessed: ‘It was quite frustrating  not to have it completed, when we’ve spent so much money and to not have finished the whole thing…to not quite be there was a bit disappointing.

‘It’s taken a couple of years but we’re finally going to have a complete house.’

Many viewers were dismayed by the overambitious plans set about by the architect, with one some questioning why he had shown them a project they would never have been able to afford

Earlier this year, George revisited to see their second phase of renovations, with the couple changing the lounge into a warm and modern room inkeeping with the rest of the house.

George called it ‘fantastic’, while Wendy added: ‘It’s nice for it to finally be finished.’

The couple said it was ‘less grand’ than Chris’ original vision, but added: ‘To increase the living space downstairs was much more important.’

Yet viewers were dismayed by the overambitious plans set about by the architect, with one saying: ‘Can’t believe they gave the architect a budget of £150k and he comes up with plans costing £250k.’

Another wrote: ‘£100k over the revised value engineered budget! This guy not doing architects any favours.’

The ‘Joe Exotic: Tiger King’ Podcast Is Available To Stream Now, So Get To It