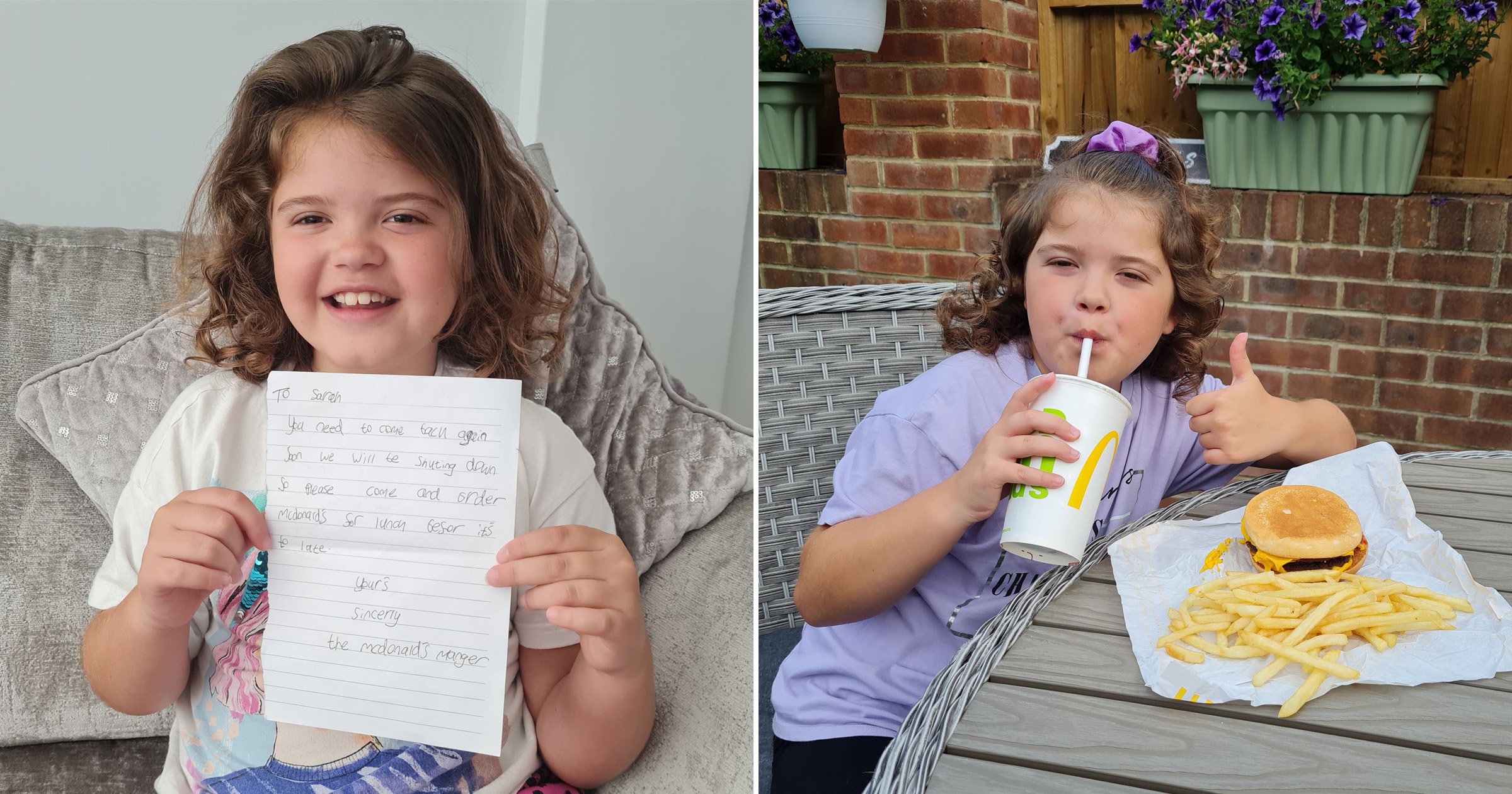 When you’re a kid, having a McDonald’s is one of those little things that means the absolute world.

One little girl was so desperate for a trip to her favourite fast food eatery, she tried to pull a fast one on her mum with a letter from the ‘manager’ of their local McDonald’s.

Crafty India Grant handed mum Sarah Grant a hand-written note that informed her that the nearby branch was shutting down, so she needed to order from them ‘before it’s too late’.

The eight-year-old wasn’t quite able to trick her mum, but Sarah played along, asking how the letter could have arrived with so little postal information.

Committed to the con, India said stoically that it had arrived by ‘magic post’.

The letter read: ‘To Sarah. You need to come back again soon.

‘We will be shutting down so please come and order McDonald’s for lunch before it’s too late.

‘Yours sincerely, the McDonald’s manager.’

Sarah, a maxillofacial nurse, kept playing along and did indeed take India to the Larchwood Avenue branch of McDonald’s, but she had her own trick up her sleeve.

Instead of simply ordering and leaving, Sarah, 41, told her daughter they’d have a chat with the manager too.

That’s when a wide-eyed India admitted to the manager that she was the one who wrote the note.

Sarah, from Havant, Hampshire, said: ‘India loves McDonald’s. We don’t have it that often, she likes to have it as a treat, once every couple of weeks.

‘She’ll have a Happy Meal occasionally, but she’s started to stick with a double cheeseburger at the moment with fries and coca-cola as a treat.

‘I received the note while I was doing some housework.

‘She said it had come through the “magic post” through the window, the same way we had a letter from Father Christmas a few years ago.

‘I’ve had some letters before that say “mummy I love you” or “you’re my best friend” so I thought it would be one of those.

‘She hadn’t asked me to spell anything, she’d just gone off on her own and done it. She was quite quiet for a while, but she takes herself off and reads, and clearly writes letters.

‘She’s a bit of a character, and she comes out with things that make us laugh.

‘She’s very quick-witted, so she’ll have a punchline before we’ve even thought through what we might say.

‘She blows me away sometimes with the stuff she comes out with, but this is probably one of her most ingenious ones.

‘I’ve never had anything like this from her before – and signed “from the McDonald’s manager”.

‘When I read it I was laughing inside, but I said seriously “oh my goodness India, where did it come from? Did you write this?”

‘She said no “it was definitely the McDonald’s manager, it wasn’t me”.

‘I pulled a face, and then she laughed a little bit. I don’t think we ever got to the point where she admitted it was her.

‘I think it was just a mutual understanding that perhaps we both knew it wasn’t the manager.’

In a way, the ploy worked because India did indeed get her McDonald’s order in – a double cheeseburger meal with a Coca-Cola, while Sarah opted for a Chicken Legend meal with an Oasis.

But her scheme fell apart when Sarah, who is married to 41-year-old concrete cutter Dave, said they needed to call in on the manager who ‘wrote’ the letter first.

Sarah, who’s also mum to 13-year-old Alfie, said: ‘She hadn’t been laying the groundwork before the letter arrived, it came out of nowhere, which is what made me laugh even more.

‘But then I mentioned we were going to go in and speak to the manager [because of the letter] instead of going through the drive-through.

‘When we got there I asked to speak to the shift manager and said that I’d received a letter from her.

‘She looked a bit confused at first and said she hadn’t written it. She then turned to India and said “did you write it?” and India nodded her head a bit timidly.’

Since India’s crafty con attempt, Sarah says she’s not asked for another McDonald’s, which is ‘unusual’ for her.

She added: ‘Though I’ve reminded her since that they are “closing down” so we can’t go as often – as that’s what the letter said.’

India said: ‘I love McDonald’s, the food is really nice. The double cheeseburger is my favourite, with a Coca-Cola, it’s a really nice treat.

‘I just really wanted McDonald’s, so I wrote the letter. I really enjoyed my meal, I was very pleased to have it for my lunch.

‘It would be great to have it again over the summer holidays.’

Sarah has since shared India’s note on Facebook, where it racked up nearly 4,000 likes, shares and comments.

Commenters heaped praise on the creative ploy, with one writing: ‘Deserves one for that inspirational idea.’

Another commented: ‘This kid’s going places.’

Priyanka Chopra’s Secret to A Clean Complexion is This Gentle Cleanser That “Leaves Skin Soft, Clear, and Calm’