The coronavirus recession will leave state and federal governments with more than $1.4 trillion in net debt by by 2024 and budgets that will struggle to get back into surplus without higher tax collections and unprecedented levels of economic growth.

As Reserve Bank deputy governor Guy Debelle warned against the early end of public spending to support the economy, the Andrews government unveiled plans on Tuesday to lift its net debt levels by 250 per cent to keep Victorians in work. 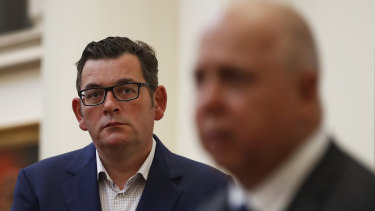 Combined, the states and territories carried $125.5 billion in net debt in the 2019-20 financial year. NSW was in the strongest position with negative net debt of $10.4 billion.

But the response to the pandemic recession has forced the states, territories and federal governments into the biggest increase in public spending since World War II.

Victoria's net debt, which reached $44.3 billion last financial year, is now on track to hit $154.8 billion in 2023-24. It expects to run a $23.3 billion budget deficit this financial year, only second in size to the Morrison government's shortfall of $213.7 billion.

By 2023-24, net debt across all levels of government is forecast to reach more than $1.4 trillion, of which $966 billion will be held at the federal level.

Queensland and the ACT are yet to release their 2020-21 budgets but they are expected to reveal an increase in debt over the next four years. Only one state, Western Australia, is forecasting to peak and then start reducing its debt level but that won't occur until 2023-24.

WA is also the only state or federal administration not to forecast a deficit over the period, due to high iron ore prices and a guaranteed share of national GST revenues.

The weakest budget continues to be that of the Northern Territory where net debt as a proportion of gross state product will surpass 40 per cent by 2022-23.

Victoria's budget is also struggling. Net debt as a share of gross state product will reach 19.5 per cent this financial year and is forecast to hit almost 29 per cent by 2023-24.

Ratings agency S&P Global said Victoria had been hit by the largest economic shock in its post-war history, surpassing the damage caused by the 1990-91 recession.

It said the decision to roll out extra stimulus to help the economy would weigh on the state's finances.

"Victoria's fiscal and economic shock could take many more years than its peers to recover," it said.

The Victorian Treasury is expecting the state economy to contract by 4 per cent this financial year before rebounding by 7.75 per cent in 2021-22, partly due to its increased spending.

Every government is hoping for a recovery in the economy to swell their coffers. Both NSW and Tasmania are tipping a lift in revenues of at least 6 per cent in 2021-22 while the federal budget is banking on a $30 billion jump in cash the following year.

While extra stimulus will weigh on the Victorian budget for years, the Reserve Bank believes it would be dangerous to withdraw support too early.

Dr Debelle, who spoke to the Australian Business Economists organisation two years ago about the lessons from the global financial crisis, told the same group on Tuesday the coronavirus pandemic had required an even larger and deeper response.

He said one of the most important lessons from the global financial crisis was when to reduce support.

"There was one lesson from the crisis I didn't talk about two years ago that is relevant to today: be careful of removing the stimulus too early," he said. "A number of European countries learned this lesson to their cost after the global financial crisis."