Give it up for Gwen Stefani! She teamed up with Saweetie for a remix of ‘Slow Clap,’ and the video felt like it could’ve been aired on MTV in the early 2000’s.

It’s time for another round of applause. Nearly a month after dropping the original “Slow Clap,” Gwen Stefani returned for the remix – and she’s brought Saweetie with her! While this may be a new version of Gwen’s song, which dropped out on Apr. 9, the music video is a homage to Gwen’s Y2K roots in the early days of her solo career. Think the aesthetic of “Luxurious” visuals, but reinvented.

The setting of the video itself is very Y2K: a gym, much like the one in the 2000 film Bring It On. Throughout the video, Gwen rocks spunky gym outfits that could’ve fit right in among the costumes in the early aughts cheerleader movie: varsity number tops, tiny gym shorts, tube socks and fish net tights. She also wears big gold hoop earrings, which were her signature in her “Luxurious” era — that song came out in 2004, FYI. Gwen’s backup dancers even sport cropped tees that say “Anaheim,” another way the video winks at Gwen’s roots (Gwen grew up in the Orange County city).

Saweetie joins the gym wear theme, stunning in outfits like a cropped pink tee and hot shorts covered in glittery neon pink stars. But the video isn’t entirely just one nostalgic throwback, which Saweetie makes clear by singing, “I ain’t no Hollaback Girl.” They later change out of their gym clothes to leap into the air in couture gowns as they sing about going from “underdog” status to being at “the top of the world.”

“Slow Clap” was released on March 11, roughly four months after Gwen kicked off her return to music with “Let Me Reintroduce Myself.” The latter was her first non-Holiday, solo original music since 2016. The song was accompanied by a video featuring a gaggle of Gwens, each dressed from a different era in her expansive career. There was a No Doubt “Just A Girl” video Gwen, a “Hollaback Girl” Gwen, a “Don’t Speak” Gwen, and a fashionista (aka 1998 MTV VMAs red carpet) version of her, all vying for the spotlight. Both “Let Me Reintroduce Myself” and “Slow Clap” received generally positive reviews, with Sam Damshenas of Gay Times calling the latter Gwen “at her absolute best.”

Gwen told Apple Music’s Zane Lowe that the song was inspired by “all those movies from the eighties where you get clapped back to life. Like yes, ‘you’re not the underdog. You’re an awesome person.’ And I feel like it’s that thing that happens to us through our life. It starts in high school where you feel like you don’t fit in, and then sometimes your weirdness actually is what makes you so special, and so the song is kind of about that.” Gwen also spoke about her upcoming album, saying she does have an idea of what the title is going to be, and the she “did actually shoot he artwork for it.” 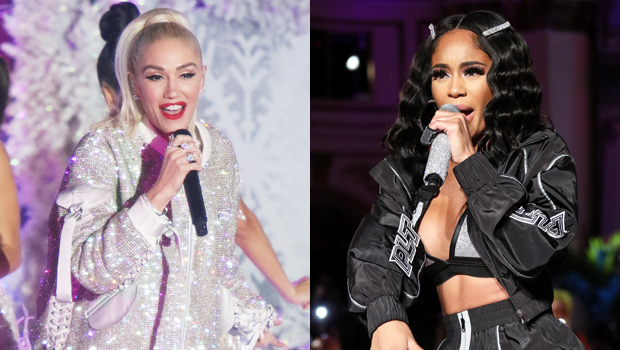 “It feels like we’re at the edge of maybe, a little bit of a relief of what we were in before,” she said when discussing creating in the time of COVID. “It feels like we’re kind of in a new place, so basically all I have to do is just try to write new music every day. That’s kind of the zone I’m in right now, but what’s so great about now is you can put music out and write at the same time, that’s just like, that’s the new school, and we didn’t have that before so it’s kind of exciting. It’s not such a big deal anymore. It’s a big deal, but it’s like you can share it faster and not worry about it as much. It’s fun.”

For Saweetie, this “Slow Clap” remix heralds what might be her year. After breaking through in 2018 with “Icy Girl,” which landed her a deal with Warner Records, she’s been building buzz with hits like “My Type,” “Tap In,” and her collab with Doja Cat, “Best Friend.” 2021 will see Saweetie drop her debut studio album, Pretty Bitch Music. It was initially set for 2020, but the COVID-19 pandemic pushed it back. The album focuses on “exponential growth and producing artistry,” she told Gal-dem, adding that she “wants people to have fun, to feel sexy [and] confident,” but also thinks it’s important to show an example of women “being about your business.” This teaming with Gwen will likely introduce Saweetie to a new audience, right in time for Pretty Bitch Music’s release.

Jeannie Mai is ‘getting stronger’ two weeks after hospitalization