WASHINGTON — Like many wartime pilots, Lt. j.g. George H.W. Bush named his airplane after a girl back home. But he had to call it “Barbara III,” since he lost his first two planes — one during training and one to enemy fire.

That’s how dangerous flying was in World War II. There were 16 pilots in George H.W. Bush’s squadron, according to retired Adm. Samuel Cox, director of Naval History and Heritage Command.

“Half of them were killed or captured before the end of the war,” Cox said.

Mr. Bush’s service records show he was “average” in flight school. One instructor described him as “somewhat eccentric.” 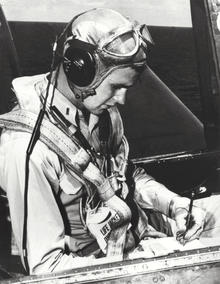 George Herbert Walker Bush is pictured in the cockpit of his TBM Avenger during the World War II.

He flew the Avenger, which had a three-man crew. It was the heaviest plane the Navy dared to fly off an aircraft carrier. His target on Sept. 2, 1944, was a Japanese radio transmitter on the island of Chichijima.

A Navy animation shows his plane was hit as he began his run into the target. But he stayed with it until he dropped his bombs, before trying to get back over water.

Cox explained fliers who parachuted down onto the island were executed. So out over the water, Mr. Bush told his crew to bail out.

“Two parachutes came out of the aircraft. One opened, which was presumably Lt. j.g. Bush. The other, what’s called a streamer — the parachute didn’t open,” Cox said.

Neither of the other two crewmen were seen again. Mr. Bush landed in the water and swam to a life raft.

“The Japanese came out after him. Some fighters from the flight were able to strafe the Japanese boats and keep them away during the four hours that Bush was actually in the water,” Cox said.

A U.S. submarine got to him before the Japanese could.

“Bush was actually surprised when out of nowhere this submarine surfaces right next to him,” Cox said.

A 20-year-old George H.W. Bush spent 30 days on that submarine thinking, as he later told the author James Bradley, “Why had I been spared and what did God have in store for me?” 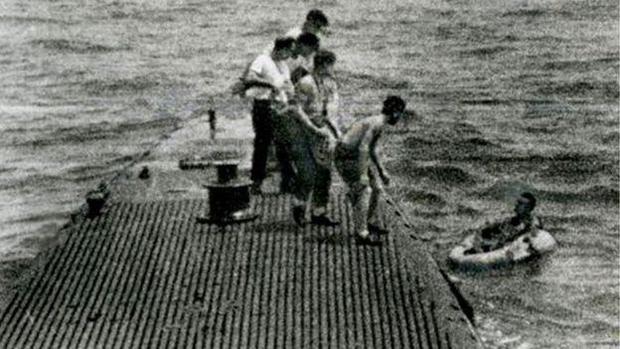 George H.W. Bush is pulled from the water after being shot down in 1944.

Americans spend this much money on fried chicken