T-HAT’S quite a collection! Queen Maxima of the Netherlands showcases her love of extravagant millinery on her state visit to Germany… but it’s just a taste of the showstoppers she has at home

There is a hat for every occasion, or at least that seems to be the style mantra of Queen Maxima of Netherlands.

The 50-year-old Dutch royal rarely appears in public without some show-stealing statement headwear over her blonde locks – and a three-day visit to Germany this week has offered a veritable millinery masterclass.

In Berlin this morning, the fashion-conscious European royal debuted yet another piece from her diverse collection of hats – her third piece of headwear so far on the three-day visit – as she joined her husband King Willem-Alexander at the Technical University of Berlin.

This time, it was a caramel-hued woven straw hat, worn in her favoured wide-brim style, and tilted slightly down to her right shoulder to keep her face firmly on view at the public event. 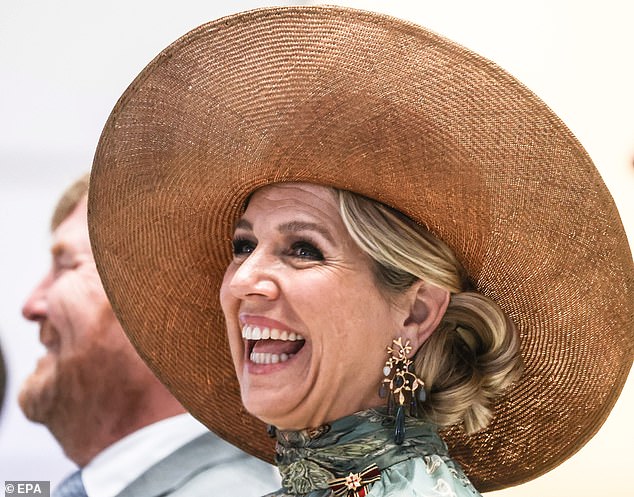 Royal fashionista Queen Maxima of the  Netherlands is known for choosing striking headwear for public events; and this morning, while accompanying husband King Willem-Alexander on a visit to the Technical University of Berlin, she sported a woven straw hat, worn in her favoured wide-brim style

The stylish queen chose the wide-brimmed hat in earthy tones, which she matched with a floral, floaty dress with floral detail in teal. She first wore the hat back in 2018, when the Dutch royals hosted the Jordanian royals in the Netherlands 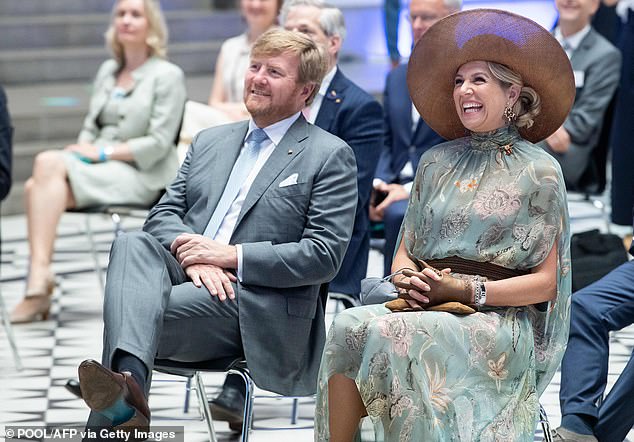 Sitting alongside husband King Willem-Alexander at the University visit, part of the couple’s three day tour of Germany this week, Maxima cut a striking figure among the attendees at the open day 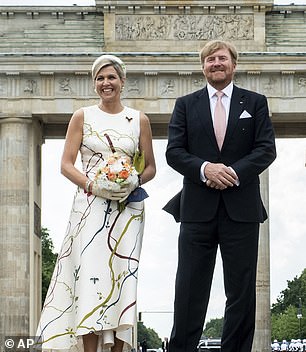 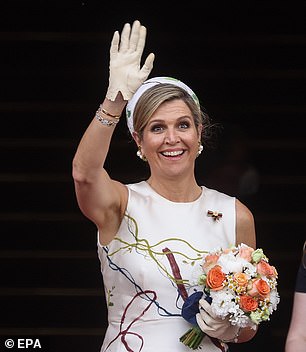 Queen Maxima and King Willem-Alexander and on Pariser Platz in front of the Brandenburg Gate in Berlin on Monday. Maxima chose a white headband with multi-coloured floral branches – and wore a dress in a similar fabric by Maison Natan 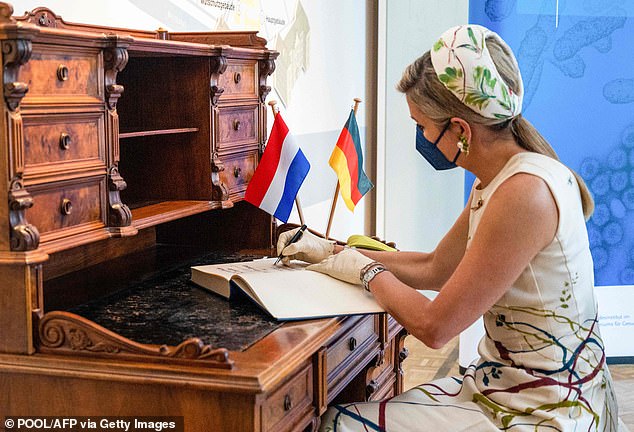 The white headpiece, which sat neatly over Maxima’s blonde hair, which was tied back in a ponytail, featured a green leaf design. Maxima is pictured signing the Golden Book during a visit to German national agency and research institute for disease control and prevention the Robert Koch Institute

The stylish queen, who frequently co-ordinates the colours of her hats with her outfits, donned a floral, floaty high-necked dress in teal and complemented the earthy tones of her hat with a pair of dramatic gold and stone drop earrings.

Maxima’s love affair with millinery arches right back to her first public appearances after marrying King Willem-Alexander in February 2002 and appears to carry on European royalty’s tradition of wearing eye-catching millinery at public events.

The mother of daughters Amalia, 17, Alexia, 15, and Ariane, 14, manages to offer a 21st take on the royal trend, and while tiaras do feature, Maxima seems much more comfortable with hats that appear straight out of the pages of fashion magazines.

More dramatic headwear has followed in recent years, including a side-worn fascinator the shape of a leaf, which she wore on a visit to a factory opening in Holland in 2016, and the luminous yellow headband, and matching suit dress, that she wore to meet Barack Obama in 2014. 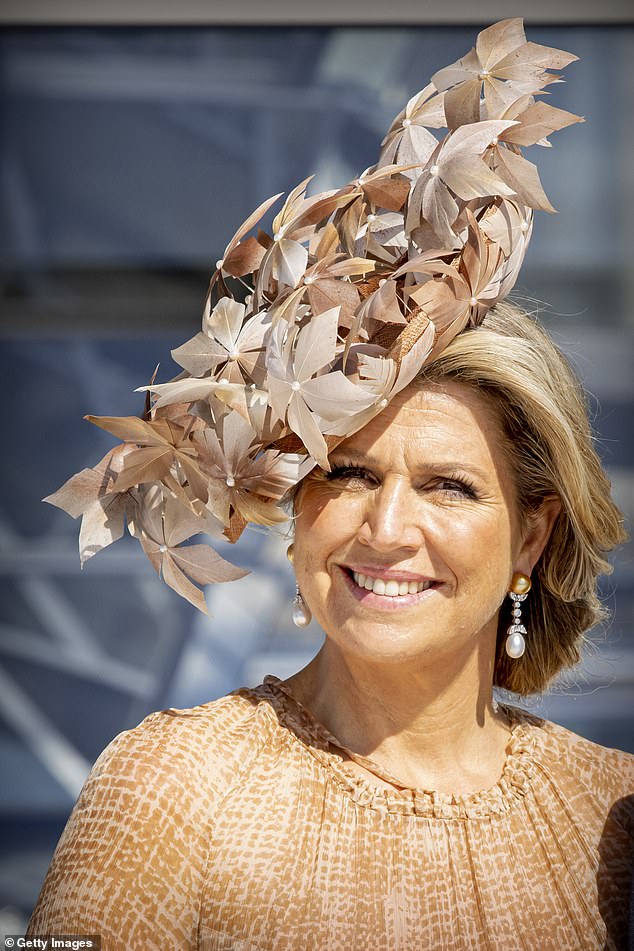 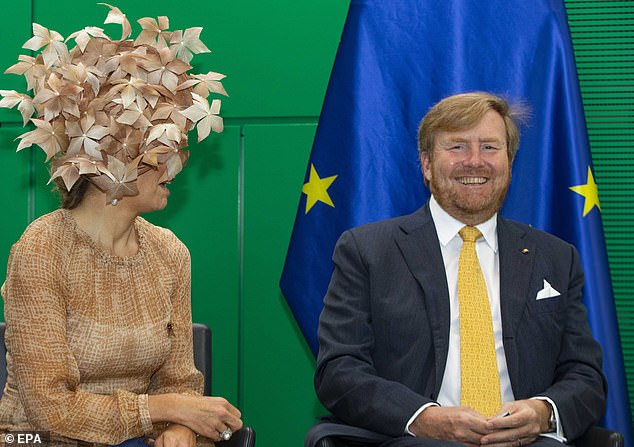 The dramatic headpiece included dozens of delicate flowers, in varying tones of brown and cream, which was perfectly matched with the shades in Maxima’s dress. She previously wore the hat to Royal Ascot in 2019 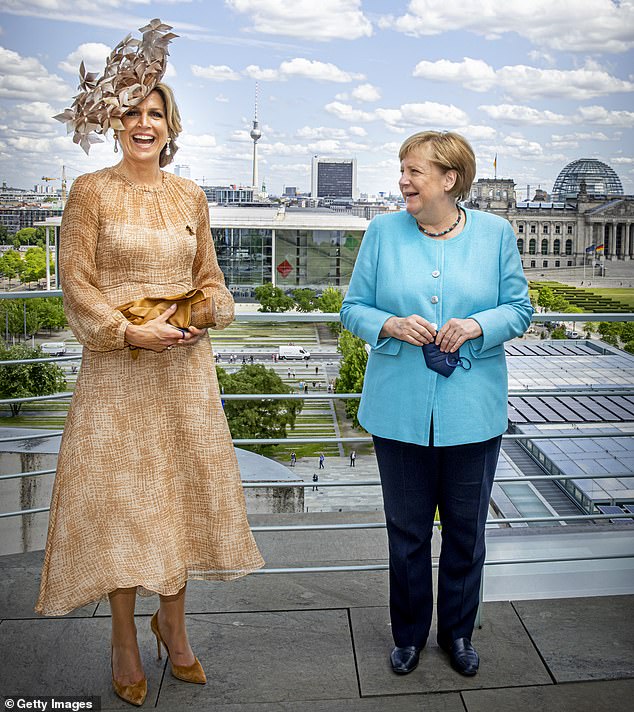 Caramel hues: Maxima pictured alongside Chancellor of Germany Angela Merkel at the Bundeskanzleramt in Berlin

Earlier this week, after the couple touched down in Germany, Maxima chose a white headband with multi-coloured floral branches – and wore a dress in a similar fabric by Maison Natan.

On day two, Her Royal Highness opted for a stunning floral fascinator that looked almost like a work of art and certainly caught the eye of German Chancellor Angela Merkel.

Showcasing Dutch talent, the creation is the handiwork of Netherlands designer Berry Rutjes Jr and Maxima previously wore the hat to Royal Ascot in 2019.

The dramatic headpiece included dozens of delicate flowers, in varying tones of brown and cream, which was perfectly matched with the shades in Maxima’s dress 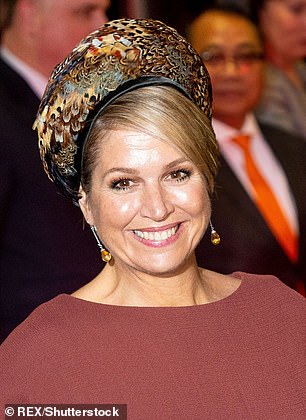 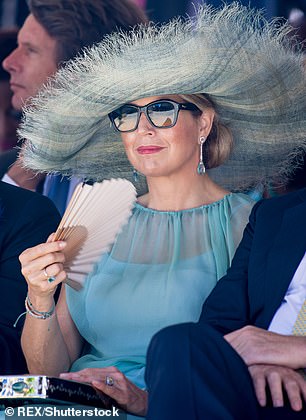 Maxima is a huge fan of natural materials, something that’s reflected in her headwear, including this feathered bonnet (worn in Holland in 2020), left, and a hessian-style blue beach hat on a visit to the Caribbean in 2018 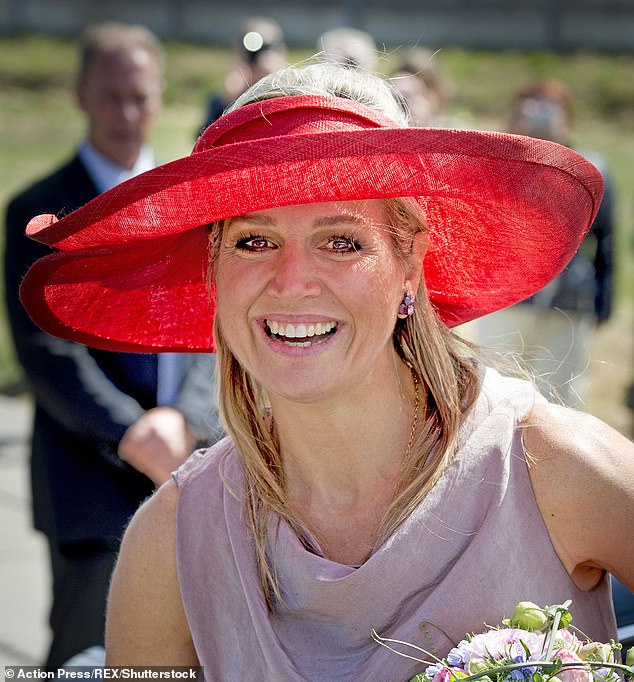 Her hats are carefully chosen; the wide-brimmed hats always lift away from the face so Maxima can still be seen, says milliner Laura Cathcart 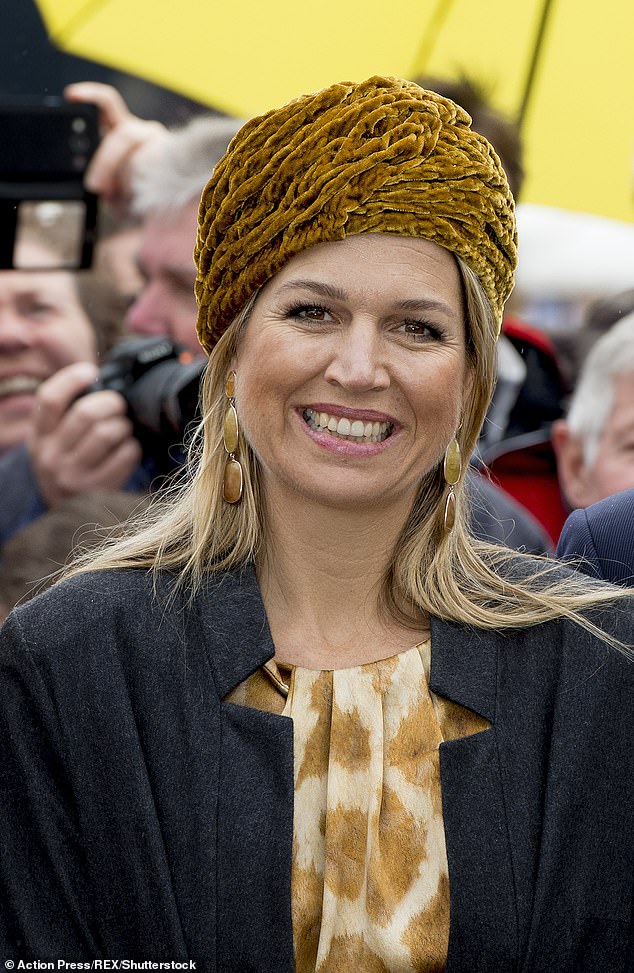 A love affair with extravagant headwear stretche back over the course of Maxima’s marriage to King Willem-Alexander, who she wed in 2002. Here, pictured in 2015, at the Long Live Club festival in Zwolle, in the Netherlands, is a velour bonnet in gold 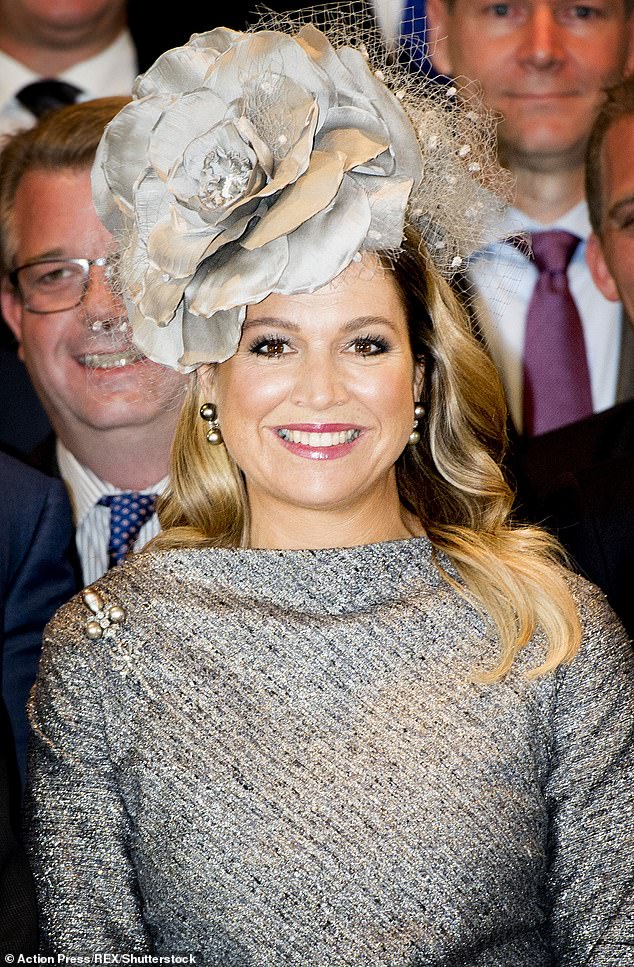 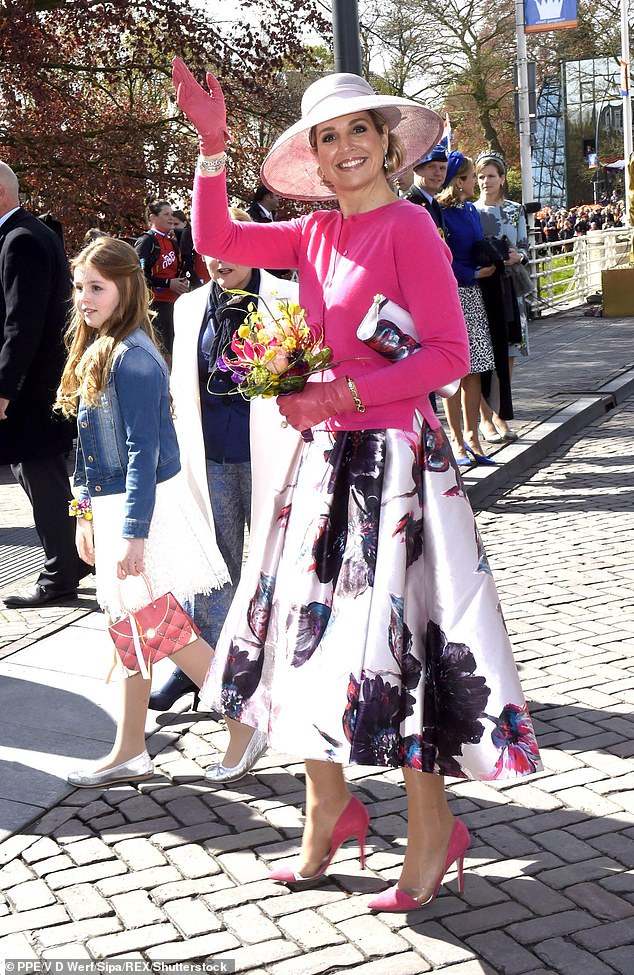 In the pink: a wide-brimmed cloche style hat was just the sartorial ticket on King’s Day in 2016 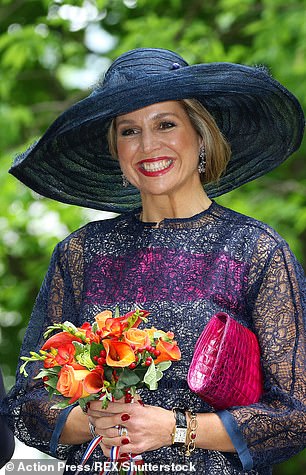 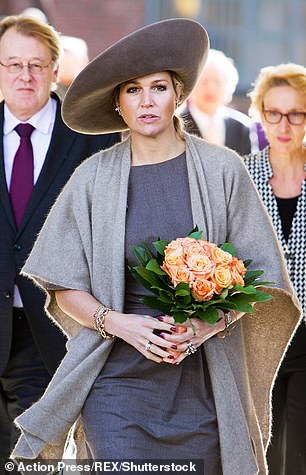 Hats can help prevent hair disasters at outdoor public events, of which Maxima does many, says milliner Laura Cathcart. A clever choice can offer a regal air but still let the queen feel accessible by showing her face

Maxima is a huge fan of natural materials, a feathered bonnet worn in Holland in 2020 is one of her most arresting looks, and a trip to the Caribbean in 2018 saw her wear a hessian-style blue beach hat, with an oversized pair of sunglasses.

Another firm favourite is the felt hat. A classic wide fedora in green by Belgian designer Maison Fabienne Delvigne was worn by Maxima in May this year during a visit to a Dutch leather factory, teamed with a hound’s tooth dress and matching cloak.

Milliner Laura Cathcart told FEMAIL that while Maxima is lucky in that she looks good in almost every style of hat, the royal has the perfect face shape for the wide brimmed hat.

‘She does carry a wide-brimmed hat very well. It really suits her and ‘halos’ her face perfectly. She’s quite tall and it makes her look very elegant. The look today in Berlin was very chic, as was the delicate floral headwear that she wore earlier this week.

‘Likewise, she looks great in a pillbox hat and wears felt hats very well. They exude country chic and fabulous in the winter – and they’re warm too.’ 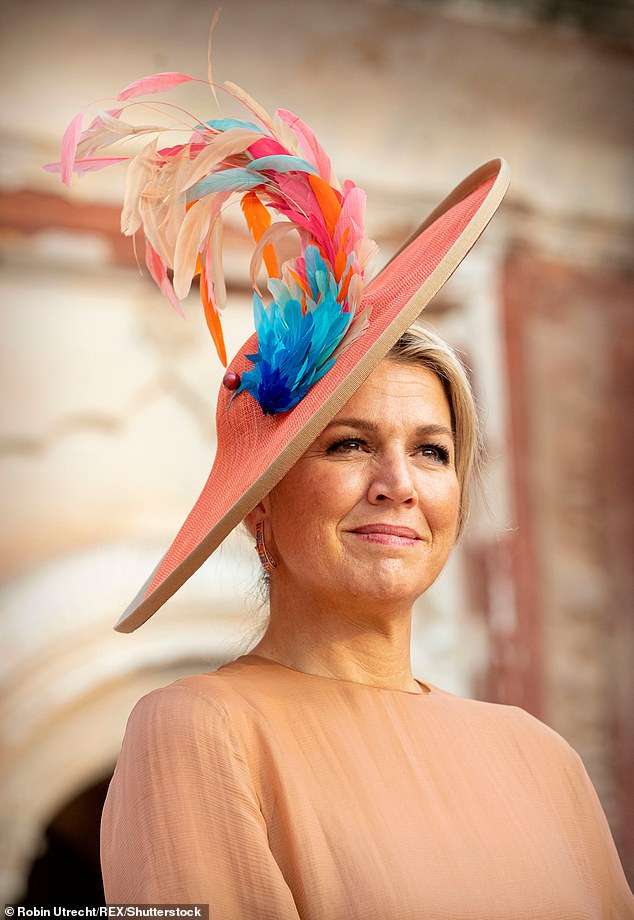 A flash of colour: In 2019, Maxima wore a salmon pink hat with a tilt that was as dramatic as the coloured blue, pink, orange and cream feathers that adorned it 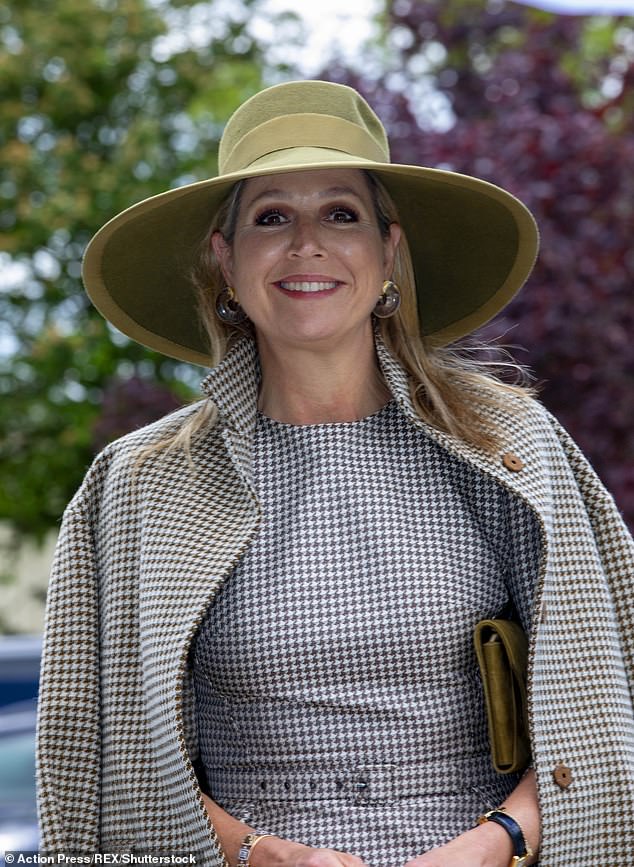 A classic wide fedora in green by Belgian designer Maison Fabienne Delvigne, worn by Maxima in May this year during a visit to a Dutch leather factory, offered classic country chic. The royal teamed the look with a hound’s tooth dress and matching cloak

‘Note too that she always has hats that show her face because she’s aware of her role as a public figure – the brim is an upward brim, rather than a downward brim. It lets people see who she is – she needs a hat that is lifted off her face.’

There are practical reasons to having an extensive hat collection, adds Cathcart. ‘A hat pins up your hair and stops gusts of wind from blowing in your face, which is important at events that are often outdoors. A hat can be a useful way of keeping your hair off the face.’

If you’re looking to capture the perfect photograph of yourself wearing a hat, Cathcart advises against over fussy designs but says you don’t need to spend a fortune to create a Maxima-style hat wardrobe.

‘A good hat collection could include some that are expensive but there are also good finds on the high street.’ 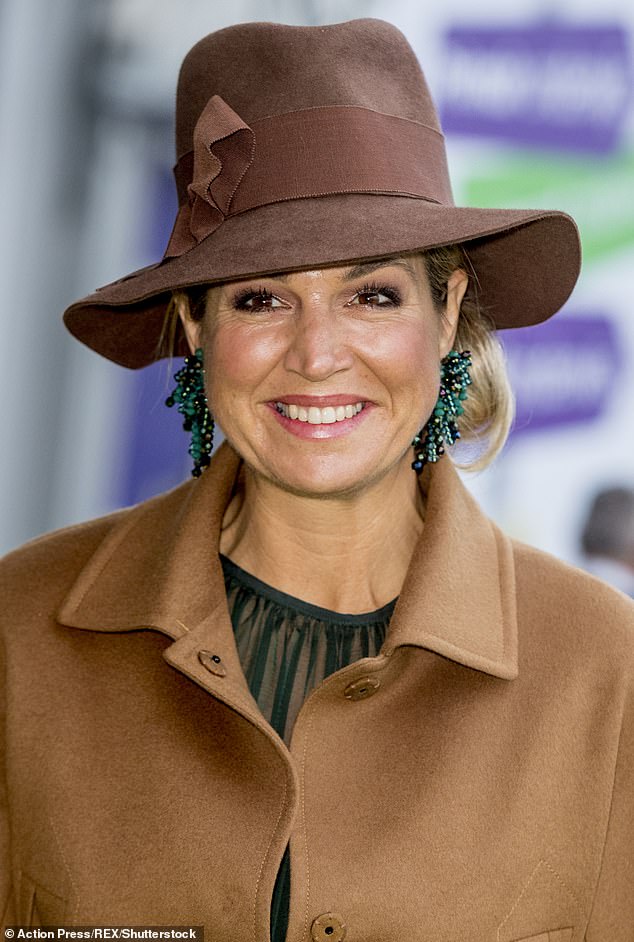 More rural chic, this time in 2017, when Maxima donned this suede number, and matching coat, to open the National Education Exhibition in Utrecht 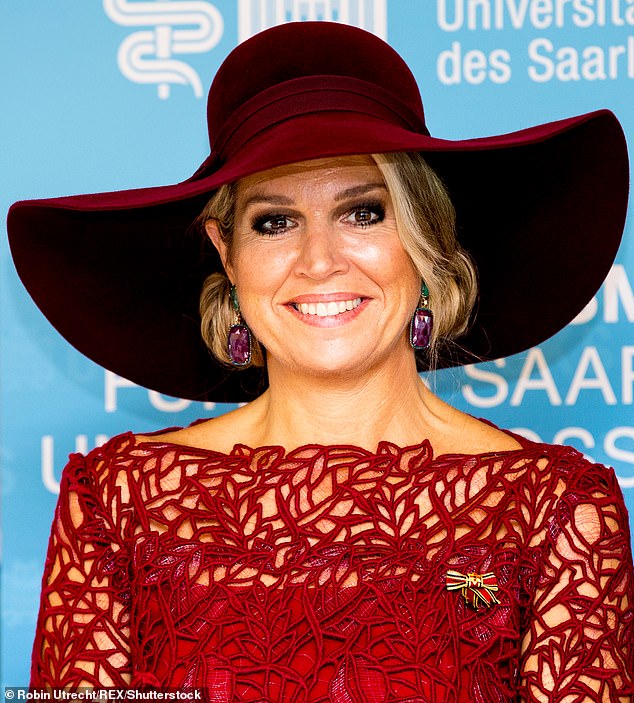 A velour favourite: This luxuriant hat has made several appearances including during the Queen’s previous visit to Germany back in 2018 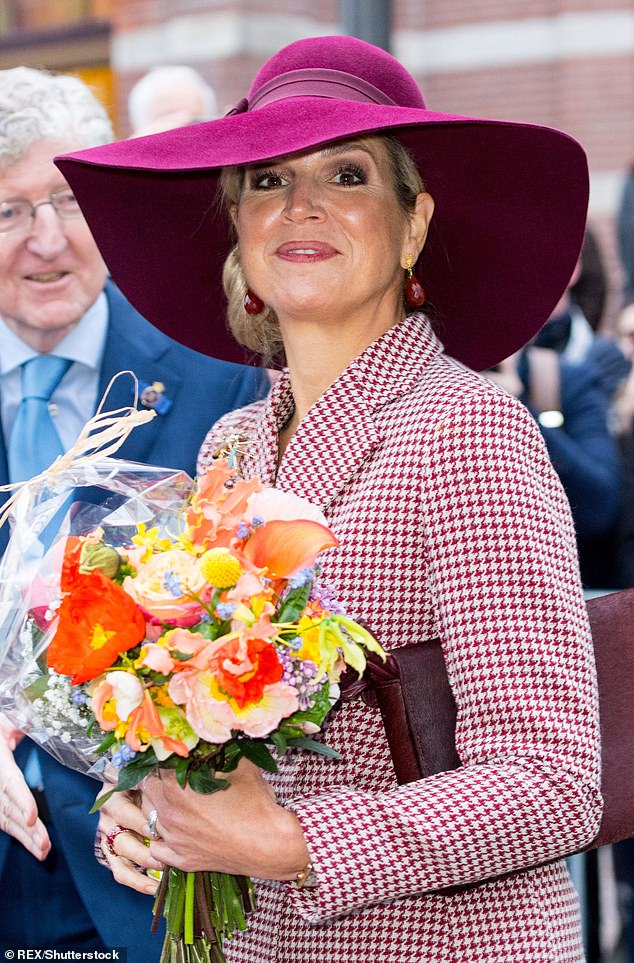 Earlier that year, Maxima had worn the same hat in her homeland to open the renovated Musis project in Arnhem

‘She favours an oversized brim, low on one side, high on the other which not only adds to the drama of it all, but also helps frame her face. A trick if you wanted to dress up your occasion looks but not be swallowed up by your accessories.

‘Her most recent head gear, for her state visit to Germany, was a tone-on-tone compliment to her frock. However, it did resemble a big nest of neutral cocktail umbrellas. Not one of my faves.

‘But I have to say, if you’re a royal, we want you to LOOK like one. And Maxima does it with her hat choice. Not that she has many fashion faux pas, but all is forgiven with a say-something hat.’