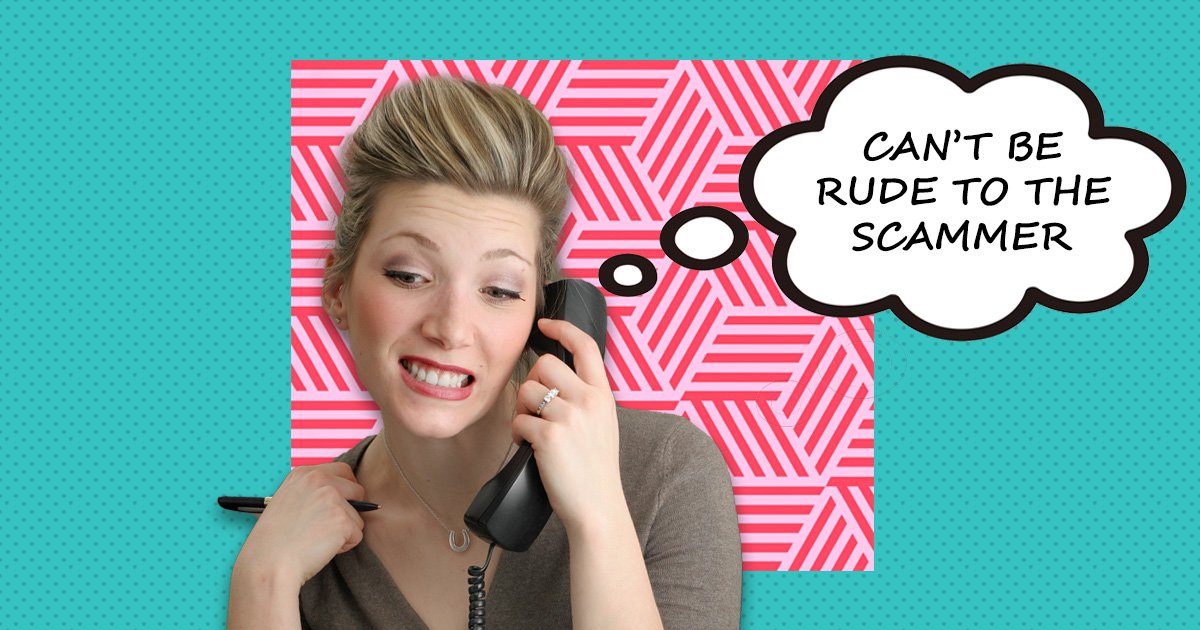 As a nation, Brits are known for our stiff upper lips and desire to not ‘rock the boat’.

There’s a certain discomfort in appearing impolite to people, and with good reason – no one wants to cause offence or upset others.

But what about when being polite means compromising on your own needs just that stretch too far?

Shockingly, Santander found in recent research on suspicious callers that 47% of Brits fail to hang up when things seem off, and one in five believe it would be impolite to do so – even if they believe they’re speaking to a scammer.

Clearly, this is a case where being deemed ‘impolite’ is necessary and to be polite in this situation could, literally, cost you.

Dr Audrey Tang, a chartered psychologist and author of The Leader’s Guide to Resilience, tells us that even she struggles with this, having only just recently risked being seen as impolite when declining a situation that made her feel uncomfortable, so much that had her ‘broken out in a cold sweat’.

She tells us having a stiff upper lip could lead to a ‘hangover’ of wanting to be palatable.

‘Humans are very good at being adaptable, so good that we often end up in places or situations we don’t enjoy and wonder how we got there,’ Dr Tang says.

Beyond people pleasing, which is one reason we might struggle with impoliteness, Dr Tang says to always defer your wants in favour of being polite, which can be an inauthentic way to live and seen as ‘disingenuous’.

Getting in touch with your ‘VITALS’ is a way to navigate first what does and doesn’t sit well with you – then you can deem how heavy a place politeness holds in the situation.

‘The first thing we need to identify is: what we want and who we want it with,’ says Dr Tang, explaining that VITALS are your: values, interests, temperament, life goals, strengths.

‘In engaging with this more often we reconnect with who we are, and so find ourselves being able to recognise when something does not sit well with us, giving us the opportunity to at least “press pause” rather than habitually “going along” with something,’ she adds.

The other issue with doing things out of politeness, is that we set people up for potential disappointment later on when we withdraw or fail to deliver.

Being polite can sometimes translate as ‘putting off letting someone down until it’s too late to do anything about it,’ Dr Tang says, ‘if you are able to say “no” at the start, you don’t need to find an excuse when people are counting on you.’

‘Sometimes we need to remember that “No.” is a complete sentence and doesn’t need a qualification. If someone keeps trying to persuade you – you need to ask, is this for their benefit or for yours, and if the former, ask yourself if you really owe them that favour.’

These statements also allow the other person to take more responsibility on their side.

Learning to distinguish between the times politeness is and isn’t called for, will allow more room for the experiences and conversations you do want to have, cutting down on the things that will annoy or drain you.

There even are situations when it is okay to be impolite – Dr Tang says there are two main ones, the first being when someone is deliberately rude, offensive or is upsetting you.

In this case she advises calling them out by simply asking, ‘why do you say that?’ as this isn’t aggressive.

The second instance is clear too – when you’ve already tried to be polite to no avail.

‘This can include when someone has not taken the polite hints,’ Dr Tang adds.

Priory psychotherapist Dee Johnson tells us other times you shouldn’t worry about being impolite include: ‘When your safety for yourself or others [is compromised], or in an emergency situation. Impoliteness can often be fear and anxiety-led in that moment.

‘You have self-respect and values and will not accept rudeness. We need to accept we are human, and if our values, principles and safety have been violated then, at times, how else can you protect, defend and give a message that you will not tolerate abuse, certain behaviour or treatment without being impolite?

‘We cannot be passive all the time – it’s not safe or helpful. It’s a natural response that, when appropriate, proportionate levels of anger manifest themselves. There is a reason for it, and you will then stay in control of it.’

It’s not about suddenly doing away with manners, rather recognising where your boundaries need to be better drawn.

There’s a difference between protecting those boundaries and just being rude.