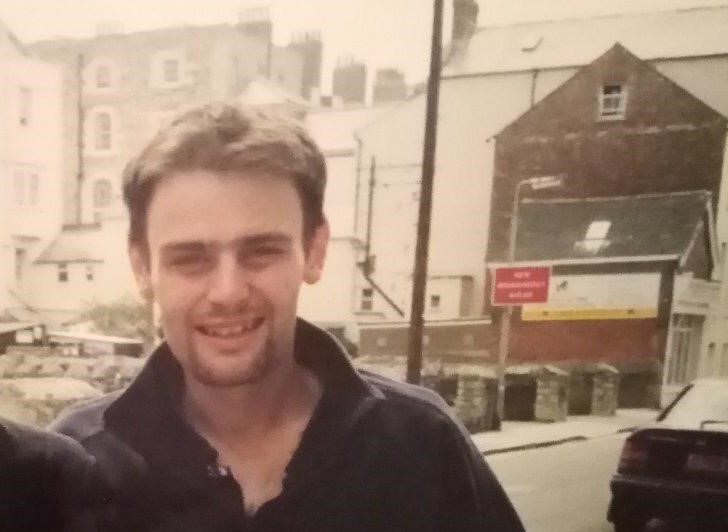 I was born in 1975 in a colourful, working-class area of Dublin called The Liberties, famous for its bars, its markets – and its crime.

I lived with my mum, dad and older brother, and, even from a young age, life felt difficult. I was a sensitive child and I wasn’t encouraged to show my feelings, so I tended to bottle things up.

But it wasn’t all bad: I was always really close to my dad.

We used to love watching TV together and listening to Simon and Garfunkel tracks. On weekends, we would walk around the Guinness site in Dublin and he would tell me what the Liberties was like when he was growing up.

The area was full of addiction and crime, and it was easy to fall into drinking. I started when I was just 14.

In the beginning, I did it to fit in on my estate but, by 15, it had become a real problem.

Not long after, my mum and dad broke up, which made me very sad. However, I couldn’t really express how I felt, so I drank to forget what was going on.

My dad had bouts of alcoholism himself; when he drank he’d be unpredictable, and sometimes he couldn’t work due to poor health.

Still, after my parents’ separation, I chose to stay with my dad. My mum went to live with her sister and my older brother had already moved out.

I made this decision partly because my dad was more relaxed – I knew I’d get away with more.

However, it wasn’t easy. He got depressed and I had to grow up quickly, taking on responsibilities like cooking, shopping and washing my own laundry, as well as offering him emotional support.

I started drinking most days and felt lost in myself. My confidence was very low.

My family stepped in and I went to stay with mum’s other sister in Weymouth for a ‘detox’. It worked – for a while – and I managed to cut right down.

But at 17 I went to see my dad, who had moved to Birmingham to be with his family, and decided to move there myself. Their business was pubs and clubs, so I was surrounded by alcohol again.

At that young age, I became manager of a big venue in the city. I thought I could contain my drinking to weekends, but soon I was getting drunk most days of the week.

I was eventually sacked because I became completely unreliable. I would disappear for long periods or turn up late, hungover.

So, at 19, I left Birmingham and moved to Bournemouth to live with my mum.

But the same problems followed me: I got stuck in a cycle of getting new jobs or relationships, then losing them because I would hit the booze too much – then I’d consume even more.

Each day I would wake up and focus on how to get enough to drink. I would sell things, like my phone, or hang around with other addicts who had supplies.

I was in a very dark place – one day just rolled into the next.

Things got so bad that I almost died – on several occasions. Six years ago, aged 40, I suffered a cardiac arrest. The year after that, I had liver and kidney failure. Then I sustained serious injuries after getting into a bike accident while I was drunk.

In 2018, I was told by multiple doctors that I would be dead within a year if I carried on the way I was. But I didn’t quit.

As an alcoholic, I continually lied and put my family through hell. From 2014 to 2018, I completely lost touch with them, other than speaking to my mum occasionally.

I often thought it would be better for us all if I was no longer around. I was so desperately unhappy that I planned to kill myself – if I didn’t die as a result of my addiction. But deep down I knew that it would break my family’s hearts and, ultimately, that’s what stopped me.

Then everything came crashing down.

During Christmas four years ago, I called my mum and she told me that my dad had died – alone in his bedsit, following a bout of food poisoning. He had still been drinking.

To make matters worse, I found out I had missed his funeral the previous month. Family members had tried hard to let me know, but as I was always losing or selling my phone, they couldn’t contact me.

I was heartbroken and felt incredibly guilty – because of my own addiction problems, I was absent when my dad most needed me. That’s something I’ve got to live with for the rest of my life.

Although I was grief-stricken, news of my dad’s death was the catalyst I needed to stop drinking. The addiction had cost my dad everything, and I didn’t want that to be my future.

It was time to make a change.

I knew Danielle Byatt, the founder of Step by Step Recovery, from my time in Weymouth. Two years ago, she got in touch after hearing I was in a bad way and offered me a sponsored place at the clinic.

Treatment was residential and lasted for six weeks. I was living with a small group of other people in recovery and having one-to-one counselling.

I was taught how to manage the emotions I’d learned to suppress while growing up. As a first step, I wrote down my life story and then was encouraged to write about my old identity and my new identity.

I was given a safe environment where I could process all of the feelings I’d been holding on to for the past 30 years.

Slowly, I learned how to give back, initially working as a volunteer, helping people who were getting ready to leave the clinic. I gradually started to think about other people’s needs instead of my own, and was eventually even given a job as an alcohol and drug recovery worker.

If it wasn’t for Danielle, I wouldn’t be here now.

For the first time, I am doing something I believe in. My life is a million times better – I’m in a flat and I have a partner and the future looks positive.

Now, I’m living; what came before was just existence.

I’m very thankful to my mum: after every failure, she would be there to pick me up. Since my treatment, we have a great relationship again.

I’m sorry that I wasn’t there for my dad when he needed me most, and that he didn’t get the same help I’ve been given.

Staying sober is my way of making amends, and my tribute to him and the rest of my family who stood by me. I think he would be proud of the person I’ve become and of the journey I’ve been on to overcome my addiction.

To anyone struggling I say, don’t ever give up hope. There is always the chance of a new start.

Step by Step Recovery has an outpatient clinic in Harley Street, London, and a residential rehab in Essex – learn more at stepbysteprecovery.co.uk.

Is your Elf on the Shelf lazy? You’ve never felt so understood, thanks to this funny video

Princess Diana's Iconic Quote About Having a 'Man' Is Empowering