“Have you seen it yet?” They’re the words that have been spreading like wildfire in whispers during phone calls and in furiously typed texts from one mother to another. “I mean, did you relate?” one friend, a mother of three, texted me.

They’re all, of course, referring to The Lost Daughter, the psychological drama starring Olivia Colman as Leda Caruso, a professor who, decades earlier, deserted her young daughters for three years, and the seismic effect that this decision has on her life. 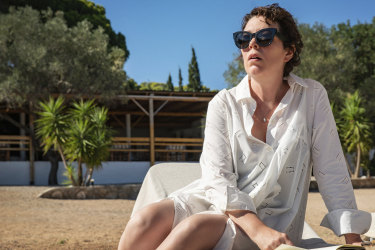 “But you don’t see the abusive shit, the impatience, frustrations, the dark thoughts,” says one friend of the motherhood experiences, formerly taboo, that were “validated” by The Lost Daughter starring Olivia Colman, pictured.

Now, before I say what I’m going to say, it’s important you know that I love my three children. It’s ecstasy, this feeling you have when your kids turn to you as naturally as grass bending in the wind, wanting nothing but you, the you who has the sort of judgmental thoughts that would incite the Dalai Lama to drive a car into a wall. My children’s vulnerability pierces my heart; these precious beings who never asked to be here but who will nevertheless be shepherded through Year 7 and broken hearts and body image struggles by me. (And their father.) What a privilege.

I texted back my reply to my friend: “Oh, I can relate.”

I don’t want to abandon my children, and never have. But I have said and done things to my children as a result of the unholy pressure of motherhood that have had consequences I could never have imagined, and that I’m still working my way back from.

“Why do you think I don’t want you to touch me?” one of my children said to me a couple of years ago. “You scare me.” My child was referring to how, years before, I would sing twisted, sing-songy nursery rhymes like Hickory Dickory Dock, but with new words like, “No one ever helps me, I am so alone”. This was my way of letting out my grief from years spent crouching by the bathtub, knees aching, bathing my children when every cell of my being cried out to lie down on the tiled floor. (Having been raised by screamers, I vowed not to scream at my children, a vow I’ve also not been able to keep.) This was during what I now think of as the Frankenstein Years when, for hours before my husband came home from work, I managed the bathing and vomit and homework and fights and sore knees and nightmares on something like dazed auto-pilot, while trying to build a career I’m passionate about without any extended family around.

“I am bigger than seven telephone books of regret for all the stuff that I’ve done.”

There have always been those who hear this from mums, roll their eyes and think, “You wanted children. You asked for this.”

Well, sure. We wanted children. But we could never have anticipated what impact the compulsion every mother I know feels – to unquestioningly put your child’s mental and physical needs before your own – would have on our lives. The way it tears down our ability to meet our own needs. Spend enough hours and minutes and days and years rushing a kid to their play date and helping with homework instead of lying in the grass with the sun on your face and eventually you can feel like you’re being buried, bit by bit. Like sand slipping through the cracks of floorboards, creating a mountain below the foundation of a house that you don’t see.

Because so many, even our closest loved ones, don’t or can’t see it either.

“[The Lost Daughter] definitely caused a bit of a… we didn’t have a fight, but, like definitely spoke about it,” says one mother of two I know, of her husband. “Because I was like, ‘Oh wow, it really resonated.’ He just did not get it at all. He just saw her as really selfish. [I thought] ‘You have no idea what it’s like being a mother. You have no f—ing clue.’ Do you think any of them [our friends’ husbands] are lying there, worrying about the issues that you worry about with your kids, or the friendship problems my daughter has? No, they’re not. And I thought, in that way, it’s so lonely.”

It’s why, when I heard Leda say to another mother that motherhood is “a crushing responsibility”, I sucked in my breath and held it, unconsciously. Finally, here was a mother who, unlike the bulk of cinematic mothers, is neither unimaginably cruel nor ceaselessly kind. Rather, she’s a loving mother who breaks under the pressure of trying to raise her kids and also nurture her keen intellect while her husband puts his career over hers.

“What really hit me about [the film] is it said things that you’re not normally allowed to say, like sometimes we do just want to walk out, and we’re not disgusting, disgraceful people,” says one mother whose greatest desire, ever since she was a small child, was to be a mum. This mother of three children, when she sees your children, envelops them in a hug that feels like the warmth of the sun. She meticulously plans parties for her kids with decorations that reflect each of their passions and, before the pandemic, managed their extracurricular activities like an air traffic controller with a James Bond-esque arsenal of snacks.

“But you don’t see the abusive shit, the impatience, frustrations, the dark thoughts, taking all of their issues and you can’t disassociate [from them],” she says. “You relive high school all over again, you stay up at night. And the resentment, and the exhaustion and frustration that it’s not going to plan. Before we have kids, we think, we’re never going to traumatise our kids like our parents did. And I am bigger than seven telephone books of regret for all the stuff that I’ve done.”

She rattles off the daily moments that make her burn with shame. Like the time she told one of her kids that she hates them in the heat of an argument. “[After], I said ‘I love you more than anything, and I see more of myself in you than anyone. I think you’re spectacular.’ But he’ll carry that with him for life.”

There was also a recent incident playing Pictionary with her daughter. “I’m telling you, she’s 12, she’s divine, and getting things wrong, and I was looking at her, ‘Are you f—ing stupid? How can you not draw that?’ I feel like my irritation was seeping through my pores, so even though my team won, she was nearly in tears. She said, ‘The truth is, you make me feel like you’re never excited to [play the game] with us’. I thought, ‘How horrible you made her feel like that’. And you know, she’s right. I dread it when they want to do shit like that. I just want to be left alone. I don’t want to sit and draw f—ing Pictionary, and listen to them snipe at each other, and manage their bullshit.”

Before The Lost Daughter, these were the moments mothers only shared with each other in secret, and only to the one or two friends they were confident wouldn’t take their worst utterances as evidence that they didn’t love their children as much as they did. Many of us can’t speak to our own mothers about our shame; it can be difficult for them to empathise when they had it so much worse. (My mother lost her parents by 22 and raised my brother and I without the luxury of my professional opportunities and a husband as supportive as mine.) So, we’d scratch around for a reflection of our experience. We’d take a photo of a snatched paragraph from a Zadie Smith essay about parenting – about how she “fall[s] into a black hole, an almost suicidal trough” after 48 hours of looking after her two children and starts “screaming at them about some tiny, insignificant matter” – and text it, along with a row of soldierly exclamation points.

We were a furtive society with our little secrets. But secrets are for the forbidden, the taboo, the shameful.

And they made us feel like we were cracked. It’s an experience that Maggie Gyllenhaal, who wrote and directed The Lost Daughter (adapted from an Elena Ferrante book), said largely inspired her to make the film. “The edges of my experience are not included, almost ever, which made me start to wonder for a while if I was, if something was off about me, if my feelings [as a parent] were too big, too much, my need, my thought, on either end of the spectrum,” she has said, noting this was because most of the films she has loved have been directed by men and not women. Her film, she added, “is asking a difficult thing of people, which is to be able to hold in your mind a mother who is… in the simplest way of putting it, is good and bad at the same time.” Which, she notes, is “all mothers”.

To see this complicated mother on screen – for Leda melts into fits of giggles with her daughters, too – feels like a cool cloth applied to a fresh burn.

It has given me what I’ve always craved: to feel seen. It’s what I’ve always strived to give my children, to let them know that even their darkest feelings are perfectly normal; they wouldn’t be human without them. Even when this means they sometimes admit to loathing me.

Househunters' fury as tiny studio flat listed for eye-watering £1,050 a month – and it looks like a GARDEN SHED