Jackson, Mississippi’s city council voted on Tuesday to move a statue of former President Andrew Jackson from outside its City Hall. The council voted 5-1 in favor of moving the statue of the man the city is named after to a new, undisclosed location.

CBS Jackson affiliate WJTV reports that city leaders said they want to move the statue to a more appropriate location, but have yet to announce its new home.

“Andrew Jackson is guilty of one of the most heinous acts of genocide that this nation has ever seen,” Jackson Mayor Chokwe Antar Lumumba said in a statement, WJTV reports. “He was also known as one of the most brutal slave owners throughout slavery.”

“And so, as we build a city focused on progress and unity we must make certain that we display images which reflect those aspirations.”

Jackson served as the country’s 7th president and is notorious for his treatment of Native Americans. He signed the Indian Removal Act of 1830, forcing Native Americans to relocate off their ancestral land. At least 4,000 people died during the migration, known as the Trail of Tears.

The mayor said, “We should not have to constantly encounter the likenesses of those who profited off of the blood, sweat, & despair of our ancestors or see them immortalized as honorable.” 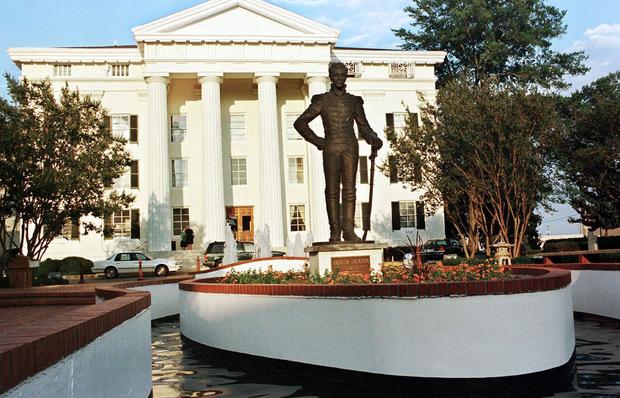 Last month, another Jackson statue located in Lafayette Square outside the White House was targeted by protesters. Four men who allegedly attempted to tear down the statue have since been charged in federal court with destruction of federal property and one has been arrested, according to the Department of Justice.

President Trump has pushed for those who participate in the destruction of statues to face criminal charges. Last month he signed an executive order instructing federal law enforcement to “prosecute the fullest extent permitted under Federal law” people who damage federal monuments. There is currently a maximum penalty of 10 years in prison for the “willful injury” of federal property.

“I just had the privilege of signing a very strong Executive Order protecting American Monuments, Memorials, and Statues — and combatting recent Criminal Violence. Long prison terms for these lawless acts against our Great Country!” he tweeted.

Cancer Survivor, 5, Gives 3K Toys to Children’s Hospital Where He Fought for His Life