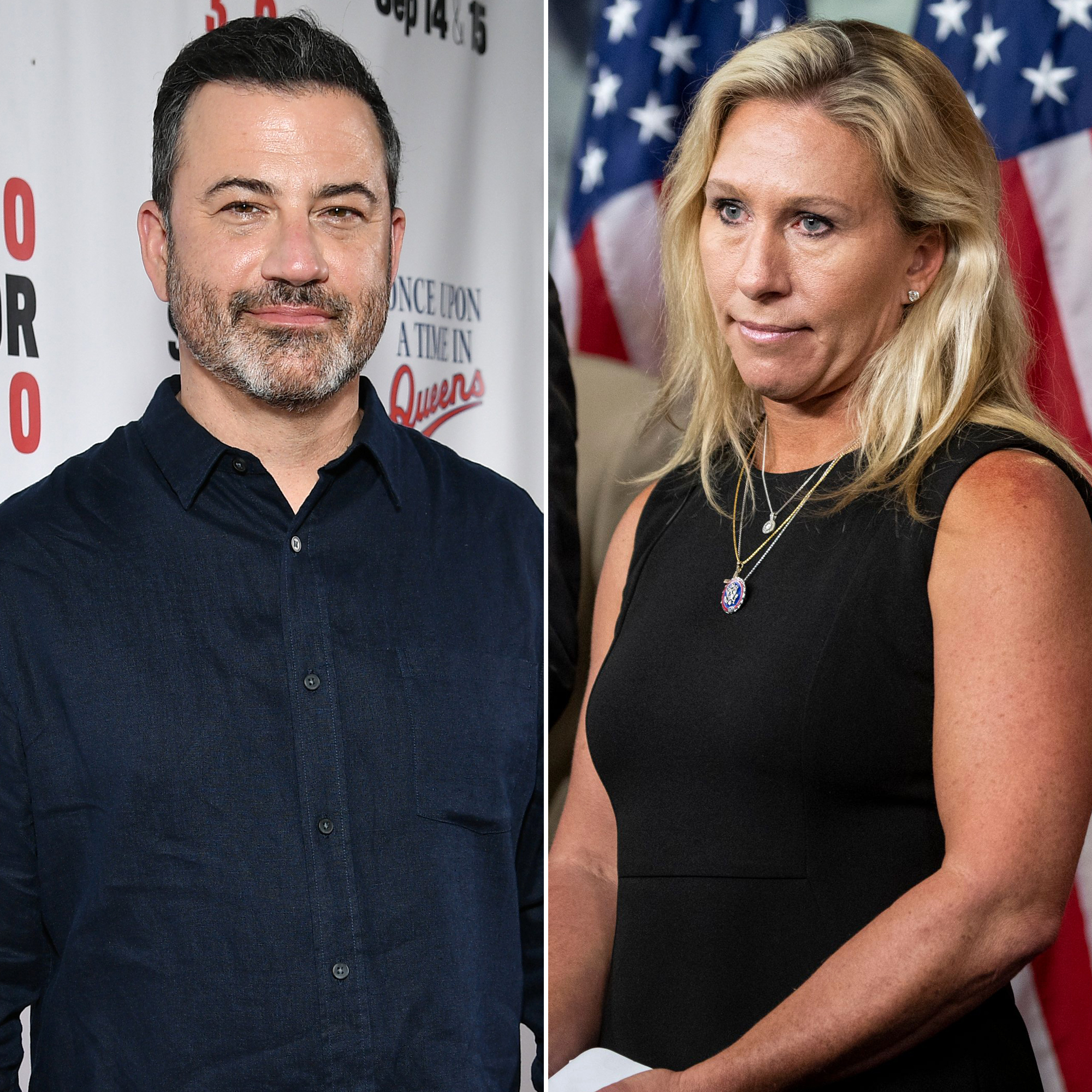 After Marjorie Taylor Greene called out Jimmy Kimmel for joking about Will Smith hypothetically slapping her, the comedian defended his humor.

The politician, 47, took to Twitter on Wednesday, April 6, writing, “@ABC this threat of violence against me by @jimmykimmel has been filed with the @CapitolPolice.” Kimmel, 54, for his part, replied to the tweet, “Officer? I would like to report a joke.”

One day prior, the New York native questioned Greene’s opinions during a segment on his Jimmy Kimmel Live! late-night show.

“This woman, Klan mom, is especially upset with the three Republican senators who said they’ll vote yes on Ketanji Brown Jackson, who’s nominated for the Supreme Court,” he explained during a segment on Tuesday, April 5. “Where is Will Smith when you really need him?”

Kimmel’s reference comes shortly after Smith, 53, made headlines for his altercation with Chris Rock at the 94th annual Academy Awards late last month. Rock, 57, made a joke about Jada Pinkett Smith‘s shaved head while presenting an award. The Girls Trip star, 50, who has alopecia, rolled her eyes before her husband walked over to the stage and slapped the stand-up comedian.

“Will Smith just smacked the s—t out of me,” Rock said in uncensored footage that later surfaced online. After the Hitch star walked back to his seat, he repeatedly yelled for Rock to “keep my wife’s name out your f—king mouth.”

The King Richard star, who won the best actor award just moments later, apologized for his “unacceptable and inexcusable” behavior toward Rock one day later. “I would like to publicly apologize to you, Chris. I was out of line and I was wrong. I am embarrassed and my actions were not indicative of the man I want to be. There is no place for violence in a world of love and kindness,” he wrote via Instagram.

Will Smith and Chris Rock’s 2022 Oscars Incident: Everything to Know

Smith added: “I would also like to apologize to The Academy, the producers of the show, all the attendees and everyone watching around the world. I would like to apologize to the Williams Family and my King Richard Family. I deeply regret that my behavior has stained what has been an otherwise gorgeous journey for all of us.”

Amid public backlash, the Philadelphia star announced his resignation from the Academy of Motion Picture Arts and Sciences.

“My actions at the 94th Academy Awards presentation were shocking, painful, and inexcusable,” he said in a statement on Friday, April 1, according to Variety. “The list of those I have hurt is long and includes Chris, his family, many of my dear friends and loved ones, all those in attendance, and global audiences at home. I betrayed the trust of the Academy.”

At the time, a source exclusively told Us Weekly that the Fresh Prince of Bel-Air alum is worried about what this incident means for his future. “He feels terrible and is trying not to panic, but seeing his roles put on ice has been a hugely bitter pill to swallow,” an insider revealed. “His biggest fear is that he’s in the process of being fully canceled, and there’s nothing he can really do about it except sit back, suck up his punishment like a man and try to atone however he can.”

Rock, for his part, has recently noted that he wouldn’t be discussing the situation publicly at a recent stand-up gig. “Chris broke the ice by sarcastically saying he’s had an interesting week,” an eyewitness shared with Us about his New Jersey gig on Saturday, April 2. “Everyone laughed because they knew what he was referring to, of course.”