Prime Minister Anthony Albanese has vowed to bring more “energy and resources” to Australia’s ties with the region in remarks to the Quad security summit that drew a quip from United States President Joe Biden about the new leader’s hectic pace in going so quickly from his election victory to the Tokyo talks.

Albanese used his opening remarks to the meeting to back a strong stand on regional sovereignty and to make it clear the Australian government had changed but support for the Quadrilateral Security Dialogue would not. 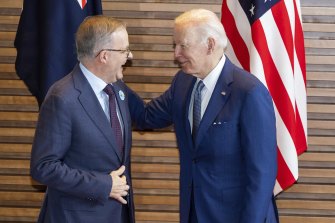 The two other Quad leaders, Japanese Prime Minister Fumio Kishida and Indian Prime Minister Narendra Modi, warmly greeted Albanese but the US President also brought humour to the occasion by joking about the Australian leader’s workload.

Biden joked with Albanese about whether the prime minister would fall asleep during the Quad summit in Tokyo after attending the meeting on Tuesday directly after the federal election and six weeks on the campaign trail interspersed by a bout of COVID.

“You got sworn in, you got on a plane and if you fall asleep while you’re here, it’s OK. I don’t know how you’re doing it!” Biden said at the opening of the Quadrilateral Security Dialogue.

That drew laughter from around the room including from Albanese, who joined the Tuesday morning talks after flying to Tokyo within three hours of being sworn in as prime minister on Monday morning.

The four leaders of the Quad have begun their meeting in Tokyo with planning to use the talks to commit the Labor government to the security partnership.

Albanese joined the host of the meeting, Japanese Prime Minister Fumio Kishida, at his residence and office in Tokyo alongside Biden and Modi.

With a response to China the key issue, the meeting began with a “family photo” of the four leaders at the Kantei building in the Akasaka district of the Japanese capital.

This is only the second fact-to-face meeting of the four leaders after former prime minister Scott Morrison met the group in Washington DC in September last year. 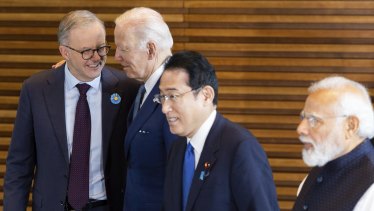 Kishida previewed the Tokyo summit with statements about stronger security cooperation and work on 5G communications, a key issue for countries worried about the dominance of Chinese equipment supplier Huawei.

The meeting in the Kantei comes 15 years after the concept of the Quad was first aired at the time former prime minister John Howard visited Tokyo for talks with the then Japanese prime minister Shinzo Abe early that year. Support for the idea cooled after Howard lost power but was revived after China adopted a more assertive foreign policy, with political interference in other countries and its military expansion in the South China Sea.

One security issue on the agenda in the Tokyo talks is Chinese surveillance, a concern for Albanese after the Chinese security pact with Solomon Islands and the presence of a Chinese spy ship off the coast of Western Australia during the election campaign.

Albanese will hold separate talks with each of the three leaders on Tuesday. He will be in Tokyo until Wednesday morning, when he is due to fly home to Australia.

Wong held a meeting with US Secretary of State Antony Blinken on Tuesday morning.

‘Game Of Thrones’ Premiere Recap: Sam Drops The Mother Of All Bombshells On Jon Snow