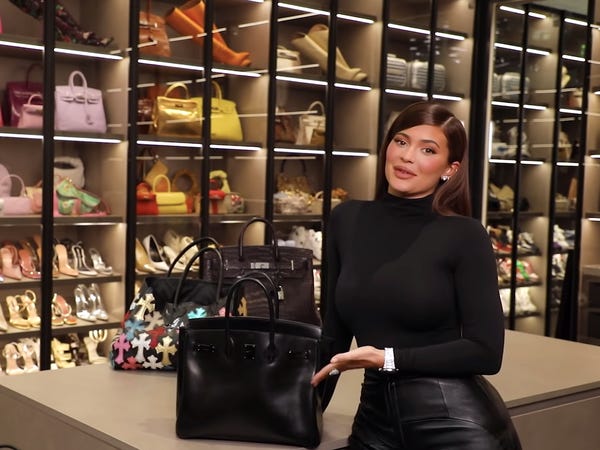 Kylie Jenner is giving fans a closer look at her massive handbag collection.

On Wednesday, the makeup mogul posted a YouTube video titled "What's In My Bag," where she showed fans the items she carries with her from day to day. She used an Hermès purse for the video, and said the black bag is one of the first Birkins she ever purchased.

According to Collector Square, an online retailer for secondhand luxury items, bags similar to Kylie's have previously sold for prices between $17,000 and $52,000. Another similar style from the So Black collection is available to purchase from Iconic Vault for $84,950 at the time of writing.

Inside Kylie's version of the designer bag, she keeps staple items like a wallet, scrunchies, gum, and a phone charger. However, she also stores a range of products created by her and other members of the Kardashian-Jenner clan, like her collaboration perfume with Kim Kardashian West's brand KKW.

She later pulled a collection of face masks from SKIMS and Kylie Cosmetics out of the bag.

Kylie did mention some slightly unexpected items while going through her purse — one of which is a packet of apple sauce. According to Kylie, she keeps it on hand as a snack and way to "bribe" her daughter Stormi when she needs her to do something.

She also keeps a pink set of Uno cards with her name on them, and a plush peapod from the toy brand Jellycat. Kylie described the latter item as her "little friend" that makes her feel "happy."

Of course, as the founder of Kylie Cosmetics, she has a surplus of beauty supplies with her at all times. In her recent video, Kylie revealed that she currently has close to 20 products, including powder, lipstick, and lip liners, in her purse.

How Mourinho fell out of love with Alli, from telling Daniel Levy Sir Alex rated him to calling the England star 'lazy'