More than 67,000 NSW residents have applied for federal coronavirus disaster payments of up to $500 a week as the Morrison government resists calls from the state for a revival of the JobKeeper wage subsidy scheme.

Federal government figures show the Victoria lockdown cost taxpayers $26 million in the payments while the NSW lockdown has cost $25.3 million — a figure that will grow after the lockdown was extended for another week because of stubbornly high case numbers. 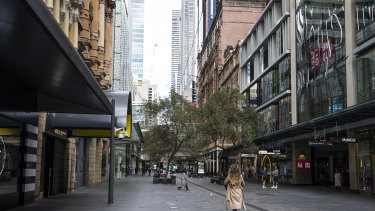 People unable to work because of the lockdown are eligible for the federal government payments.Credit:Louise Kennerley

The numbers show that while some applicants have described the system as confusing and technical, money is flowing. However, unlike JobKeeper, people seeking the payments have to re-apply for each week for the federal disaster payments.

Treasurer Josh Frydenberg stared down a Berejiklian government request to reinstate JobKeeper on Wednesday, saying the federal disaster payments were providing appropriate support. At $500 a week for people who have lost more than 20 hours’ work a week and $325 for people who have lost less, they are the same as the reduced rates of JobKeeper that applied near the end of the scheme.

“We’re not bringing back JobKeeper,” Mr Frydenberg said. The scheme had originally been worth $1500 a fortnight.

Of the 67,120 people who have applied for the disaster payments in NSW by midnight July 7, figures released by Government Services Minister Linda Reynolds’ office show 53,300 had been granted with $25.3 million paid out.

Claims for Victoria’s lockdown closed on Friday, by which time there had been more than 75,410 claims from residents with 57,730 granted. They totalled $26,593,575 with a small number to be finalised. Because the federal payments only kick in after the first week of a lockdown in an area that the Commonwealth’s chief medical officer has declared as a coronavirus hotspot, Victorians were only eligible for one week of payments from June 4-10.

People in Central Sydney, who faced restrictions, and were therefore eligible to claim first, are eligible for a second week of payments from Thursday. The rest of the city, along with the Central Coast, Blue Mountains and areas around Wollongong can apply for their second payments from Sunday.

Shadow Treasurer Jim Chalmers criticised the Morrison government’s decision to withdraw JobKeeper on Wednesday but did not say whether Labor wanted it reintroduced for NSW.

“The workers and small businesses of this country, and particularly right now in Sydney, are hostage to this incompetence when it comes to vaccines and to their failure to provide sufficient support to get through a difficult period,” Dr Chalmers told reporters in Brisbane.

Australian Council of Trade Unions president Michele O’Neil was more forthright at the start of the month, saying all jurisdictions in lockdown should have access to a second round of JobKeeper.

The full cost of the lockdown is many times higher than the cost of the support payments, with industry groups suggesting it could be $1 billion a week, though health experts argue the cost of the alternative is higher.

US baseball hangs on to beat South Korea, win Group B with Jack Lopez web gem